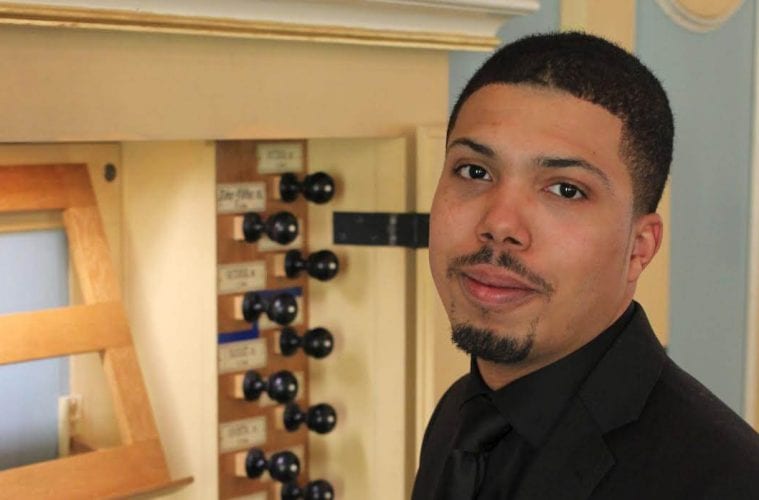 On Wednesday evening at All Saints’ Episcopal Church in Midtown, organist Alcee Chriss III performed a recital of music by Bach, Tournemire, Rachmaninoff, Elgar, Laurin, Demessieux and Reger. It was the second among four recitals in this year’s Atlanta Summer Organ Festival.

Chriss obtained his bachelor’s and master’s degrees from Oberlin Conservatory of Music. He has been pursuing a PhD at McGill University in Montréal, and performed a récital de doctorat on May 15 at the Église St-Jean-Baptiste in that city.

For Wednesday’s performance at All Saints’, Chriss opened with J.S. Bach’s Organ Concerto in D minor, BWV 596. It’s actually a transcription of Antonio Vivaldi’s Concerto in D minor, Op.3, No.11 for two violins and obbligato violoncello — one of five organ transcriptions Bach made of Italian concerti in 1714 and 1715 during his second period of employment at the ducal court in Weimar. That was followed by the first two movements from Suite de morceaux, Op. 19 by French composer Charles Tournemire — the “Adagietto” and “Scherzetto” movements, respectively.

It took the third work on the program for the recital to really get into gear, and it began to take flight when Chriss performed his own transcription of the first movement (“Non-allegro”) from Rachmaninoff’s final work for orchestra, the Symphonic Dances, Op. 45. It proved a fine transcription, taking good advantage of the balanced but colorful palette of All Saints’ 87-rank Kenan Memorial Organ, built by John-Paul Buzard (Op. 29) pipe organ builders.

The atmosphere then toned down a bit to a state of British propriety with the “Andante espressivo” from Sir Edward Elgar’s Organ Sonata in G major, Op. 28. It made for an interesting companion to the Rachmaninoff; while Chriss transcribed that orchestral work to organ, the Elgar Sonata is an organ work with a somewhat orchestral character, and was transcribed for orchestra after the composer’s death by Gordon Jacob — a version which premiered in 1946 but was subsequently neglected until the late 1980s.

The Elgar was followed by organ works of two female composers. Up first was Epilogue, Op. 50 by Canadian composer-organist Rachel Laurin, a six-and-a-half minute work with neoclassical sentiments that won the Marilyn Mason New Organ Music Composition Competition in 2009. On its heels came “Sixtes” from Six Études, Op. 5 by Jeanne Demessieux, composed in 1944, a rather chromatic work that featured some flying heel-toe-heel figurations for both feet at once in the pedals.

The grand finale was the Phantasie und Fuge über B-A-C-H, Op.46 by Max Reger (1900). Based on the familiar B-A-C-H motif (the pitch sequence B-flat, A, C, B — since in German the “B” and “H” are respectively our B-flat and B-natural in American musical lingo). While a complete rundown of Reger’s motivations for composing it are too long and involved for this review, let’s just say it is Reger’s imaginative conflating or “counterbalancing” of what he considered the “Wagnerian degeneration” of German music in his day with the venerated qualities of that Urvater of German music, J.S. Bach.

After the harmonically twisting and emotionally free-flowing flourishes of the opening fantasia, the extensive fugue began quietly, and Chriss built it up slowly, in a long, patient ascent of volume and color to its heroic, expansive apex. It was the musical high point of the evening, with Chriss’ Rachmaninoff transcription running a close second-place finish.

For an encore, Chriss performed a transcription of Richard Wagner’s “Ride of the Valkyries,” which invoked quiet laughs of recognition from the audience. It’s a piece that could be easily overblown and campy, given how its familiar tune has often been used for humorous effect in American popular culture — such as the Warner Brothers’ classic Bugs Bunny animated short, What’s Opera, Doc? (To which Elmer Fudd infamously sings “Kill the Wabbit.”) Even so, it remains a favorite encore among the broader public, and Chriss kept the “Ride” within reasonable rein but fun.

Chriss is already scheduled to return to Atlanta next season for a recital at Spivey Hall on April 14, 2018.