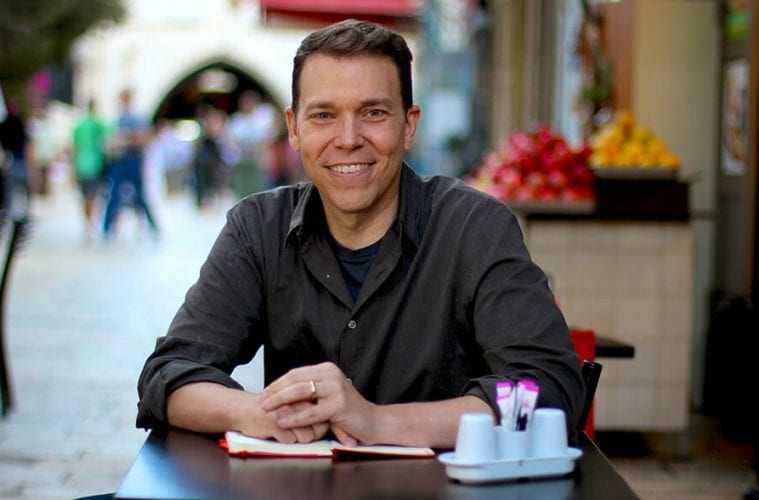 Like countless pilgrims before him, Bruce Feiler experienced a revelation at the Sistine Chapel.

He had his two daughters in tow, and they wanted to know why the focus was on Adam, with Eve relegated to less prominent status in Michelangelo’s fresco. In that moment, Feiler, a Savannah native who has made a career of making the Bible more accessible and relevant to modern life, decided to explore the love story between Adam and Eve, with a special emphasis on Eve, who today and historically, gets blamed for everything from menstrual cramps to the drudgery of work.

He writes, “Because of all the things we’re told were present in that garden – man, woman, serpent, sex, temptation, deception, sin, death – the thing that’s most important usually doesn’t make the list. . . . It’s love. . . . That’s the real story of the Garden of Eden, yet it’s the story we somehow neglect to hear. This book is the story of how we forgot that message and the story of how we can reclaim it again. This is the story of Adam and Eve. The first love story. The story we never tell.”

ArtsATL caught up with Feiler before his upcoming talks about his book, The First Love Story: Adam, Eve, And Us (Penguin Press), at Holy Trinity Parish with Georgia Center for the Book and the Marcus Jewish Community Center.

ArtsATL: Why did you become especially fascinated with Eve?

Bruce Feiler: Because I am surrounded by women. I have a wife, two daughters, a mother, a sister and a mother-in-law. We have these conversations around the dinner table about everything from equal pay to having it all to work-life balance, and it all can be traced in some way back to that first story. Those are conversations we’ve had for thousands of years.

For women, nothing has been more discriminatory than organized religion. We are keenly aware of that. Also, we tend to emphasize Jesus and Abraham as role models while Adam and Eve, particularly Eve, are the forgotten figures of the Bible.

ArtsATL: What fresh insights can we glean from Adam and Eve?

Feiler: I have the belief that sometimes we can get answers for today’s questions from the past. I tweet, but I Talmud, too! So I decided to dig through all of the layers of blame, sexism and criticism, and I concluded that their story is in many ways very modern.

Loneliness is a huge problem in contemporary life. They got kicked out of the garden, but they stuck together rather than splitting up. They lost a son, but they had a commitment to working through their pain that is very relevant today, a careful balance between independence and interdependence.

ArtsATL: What were some of the surprising discoveries you made in the course of your research?

Feiler: Who could blame women for running away from religion? Yet they have been propping it up and rewriting and retelling the story, often transforming Eve into a heroine rather than a victim. I was also surprised at how many people have found meaning in the story of Adam and Eve, in everything from Michelangelo to Milton to Twain to Hemingway to Frankenstein to Beyonce – who knew? And Mae West, of course. I tried to cover ground from Mesopotamia to Hollywood in my research.

ArtsATL: Among my favorite lines from your unusual and sprightly book is the opening of chapter five: “I waited as long as I could before sticking my hand in Mae West’s corset. I would be lying if I didn’t admit that it wasn’t something of a thrill. The item was also, I should confess, a little smaller than I expected.” What does Mae West have to do with Genesis?

Feiler: She performed in a skit that became one of the most infamous incidents in the long-running standoff between Hollywood and religion. The two-act play was set in the Garden of Eden and featured Don Ameche as Adam, West as Eve and Charlie McCarthy (Edgar Bergen’s dummy) as the snake. As soon as it aired, the skit ignited a scandal that engulfed NBC, enraged the federal government and generated a backlash severe enough that it resulted in Hollywood’s biggest female star being banned from radio. It also served as an awkward introduction of Adam and Eve into the media age and showed that despite the rapid changes that love, sex and relationships were undergoing in the modern world, the first couple still stood at center stage.

ArtsATL: How should we apply the lessons of Adam and Eve to our relationships today?

Feiler: If you’re in a relationship with another person, you are in a relationship with Adam and Eve, who are the ultimate meme, the big bang of humanity. And that’s true even if we don’t happen to believe they existed exactly as the Bible says. I think the ultimate lesson is that togetherness can be a key to happiness, that we need to find other people who bring us comfort, who share our joys and sorrows. Their story is a tribute to togetherness.