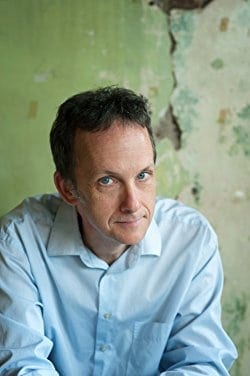 A conversation with author Peter McDade about “The Weight of Sound”

You probably wouldn’t imagine a rock star wearing a tidy red polo shirt. You also probably wouldn’t imagine one quietly sitting over a cup of tea in Dr. Bombay’s Underwater Tea Room, his pale blue eyes catching the light. Spotting him at the warm wooden table, you might guess he is a college professor, or a devoted dad, or a novelist. And he, Peter McDade, is all three.

McDade is also a musician. He played drums in the rock band Uncle Green, which formed in New Jersey when McDade was a high school freshman. The band relocated to Atlanta after graduation and stayed for the duration of their career, making seven records, holding four labels, and only pulling the plug after 17 years of live performances roving from Phoenix to Portland. Drawing on decades of experience touring, recording and living in unreliable band vans, McDade has published his debut novel about the music industry, The Weight of Sound.

The Weight of Sound takes the reader on a tour through years and layers of the music industry, spinning a web around “Monkeyhole,” a young band from Athens, GA, that forms the story’s core. The novel wades through how Monkeyhole touches each of its players, their frustrated girlfriends, roadies and managers, as well as more far-spun characters: isolated teenagers, closeted record salesmen and crumpled parents, lovers and friends.

The power of the novel comes from the introspection McDade builds into each voice. We sit on the shoulders of characters as they make the hardest decisions of their lives: whether to go to college, have children, break promises. McDade’s light touch makes the story cohere despite the book’s shifting viewpoints. It is the experience of watching a scene shot by multiple cameras; the shifting perspectives complement rather than confuse.

In a Tristram Shandy-ish turn, the novel begins in 1974 with Monkeyhole’s lead singer’s birth. Spider is a prodigal musician, and the story orbits him from birth to his later career, in what McDade jokingly calls a “coming of middle-age story.” Spider holds the center of the story, “in part because it’s Spider’s music. Even when he’s not on the page, his music is affecting somebody in every chapter.”

Monkeyhole, formed in 1992, finds limited success in the alt-rock scene, telling the all-too-common story of a band on the way up while the music industry itself is on the way down. Record labels in the ’90s are withering, radio is losing influence and the industry is turning toward online media. Monkeyhole, and the industry players who surround them, are still playing by the old rules, seeing too late that the game has changed.

The Weight of Sound is not the tale of a carefree band’s meteoric ascent, but it is not a bitter late-capitalist apology, either. The novel feeds on the euphoria of making music, and McDade describes the thrill of performing and recording with an insider’s precision. “Just when the plane felt like it might not land safely the wheels slammed into the ground, everyone still alive,” McDade writes about a song so full of force that it almost gets away from the players, invoking the familiar gut-twist of reckless energy. Writing about a musician finding his way back to playing, McDade speaks to the moment in art making when things are stripped down to the instinctual and clean: “There’s a clarity I have not felt in a long time . . . wiping off an entire layer of film I did not even know had crept across my eyes.”

While the novel is drawn from experience, it is not a memoir. “A lot of the events really happened to me, or someone I know, but I made up all the people . . . More than [the specifics], the vibe is taken from real life. That feeling you get when you’re playing with other people and it’s really working — it’s a hard thing to describe. That’s what I tried to draw on.”

Much of the novel is a celebration, but McDade does not shy from the darker sides of the music industry. Landing in Barcelona, Spider struggles to stay clean:

Each time they hit a new city Spider reaffirms his vow to stop smoking, snorting, and drinking . . . But then [the roadie] shows up with some especially good weed or hash, or maybe a nice line of pure and shiny coke, and Spider puts off abstinence yet again: the would-be virgin unable to resist the allure of physical contact, always tempted to see how far things can go . . .

“You have a lot of free time, and you get so-many-bucks a day to spend on whatever you want. It becomes very hard not to,” McDade says. “It was never a problem for me personally, but that’s only because I learned early on that I couldn’t drink and drum . . . But there were people who, luckily or unluckily for them, could have a six-pack before they went on stage and play great . . . Now I’m at the age where addiction is really at the forefront. My friends who are still playing with me, some are only still playing because they’ve gone to AA, or kicked whatever it is that they had to kick. And some of them didn’t make it.”

The novel also deftly introduces gay characters struggling under the titty-bars-and-cocaine nature of the recording industry, especially in the American South in the ’90s, where it was difficult or dangerous to be openly gay. “I’ve been to pretty much every strip club in the Southeast,” says McDade, a happily married gay man. “The most depressing was in Birmingham, Alabama, on a Tuesday night. Six people and the [radio exec] got so drunk, and ended up not playing the record anyway. But this is what you do. You have to play the role. That’s real life, sadly.”

Accompanying the novel is a 14-track album. Each song corresponds to a chapter; McDade reached out to his network of musicians, collaborating with friends to compile songs that informed his writing. He sent the lyrics and a basic direction, such as “You’re an angry teenage boy. Go.” The results were often surprising. “Once the song existed, I would go back and revise the chapter. The song ping-pongs back, and now the chapter is changed because I know a little more about it.”

The music itself is rich with references. Listen to “Taxman,” a Beatles song that Spider loved as a child, and then listen to “Pay Me Now,” the first big Monkeyhole single, and it’s a pretty clear reference. “It has that really distinctive bass lick: dum dum da dum dum dum,” McDade sings. “My goal would be that those kinds of mirrors and connections, in the words and the music — people can follow them as deeply as they want.”

The novel also includes album covers for all of Monkeyhole’s imaginary records, deep-diving into the novel’s imagined universe. “If you want to go down the rabbit hole and try to find the musical references and all that, I’d be thrilled.” But it isn’t just a novel for musicians, McDade notes. “I’m more interested in the characters. Maybe it’s my middle-age thing,” McDade laughs. “But it’s really about the people. About how we get where we are.”

The Weight of Sound is now available for preorder, and McDade will give a reading at Kavarna on August 26 at 7 p.m.