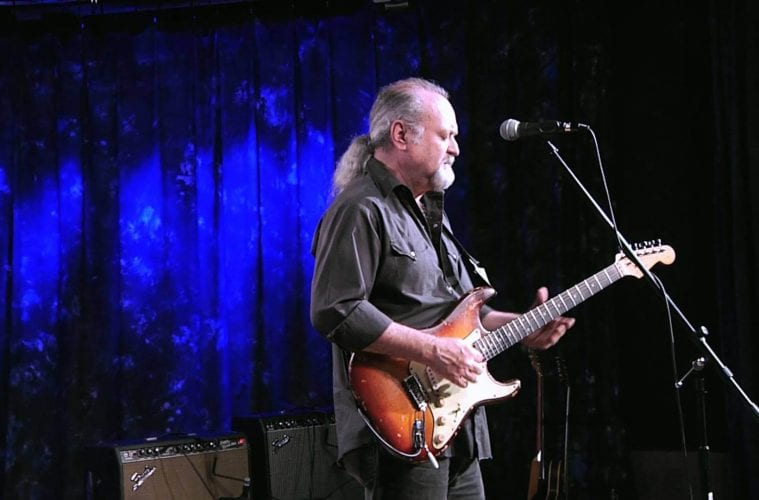 Review: Tinsley Ellis and his Blues Is Dead band prove the blues are indeed alive and well

Legendary Georgia blues-rock guitarist Tinsley Ellis brought his Blues Is Dead band to Terminal West Friday night. A kind of side project for Ellis, the band focuses on blues and R&B songs performed and recorded by the Grateful Dead and a few other bands of the Fillmore West-era heyday.

Blues Is Dead made its debut on April 9 at Skull and Roses Festival in Ventura, California, then played 10 more shows — two in Tennessee and eight in Colorado — during May and June before taking a month-long summer break. Friday’s show at Terminal West kicked a one-month, eight-show tour through seven states.

It’s not surprising that early August is a prime time for Jerry Garcia and Grateful Dead tribute events: Garcia was born on August 1, 1942 and died on August 9, 1995. During its early years, the music and concerts of the Grateful Dead reflected and influenced the shifts in American youth counter-culture from the “beat generation” to the “hippie movement.” Their influence has persisted well beyond the band’s 30-year career span from the first performance as the Grateful Dead in 1965 to Garcia’s death in 1995 — in no small part thanks to their devoted, still-active “Deadhead” fan base. Blues was a major part of their eclectic roots, evolving style and long instrumental jams. It is frequently said by devotees that no two Grateful Dead performances were ever alike.

Captain Trips & The Sunstroke Serenaders, a Grateful Dead cover band put together by guitarist Jack Boyanton, opened Friday’s show with a one-hour set that included songs like “Uncle John’s Band” and “Feel Like a Stranger” in the energized mix. The band’s name refers to a nickname of Jerry Garcia, drawn from a comment supposedly made by Bob Weir when introducing the Grateful Dead at a concert in Oregon.

The Terminal West show was a kind of anniversary for Captain Trips & The Sunstroke Serenaders, in that the band made their debut almost exactly one year ago at Avondale Towne Cinema during Jerry Week, on August 6, 2016. In this performance, they offered the responsive, still incoming audience a more rock-oriented warm-up to the well-seasoned bluesman Ellis.

After a half hour break to change setups, Ellis and his Blues Is Dead band took the stage for a nonstop two-hour set of what one might easily call “psychedelic blues” — largely blues, R&B and blues-influenced music played by Grateful Dead, especially from their earlier years when founding member Ron “Pigpen” McKernan was still the band’s frontman, singing and playing harmonica and electric organ. McKernan’s role in the band waned as Garcia and Weir embraced psychedelic rock, influencing the band to move strongly in that direction. McKernan struggled to keep up until he left the band in 1972. He died in 1973.

It’s the blues-rooted side of the Grateful Dead that is brought to the fore by Ellis and Blues Is Dead. Ellis himself has an impressive blues-rock performance track record and discography: 18 albums in 35 years, the last four on his own Heartfixers label. He has brought a clutch of veteran blues/rock improvisational musicians along for this particular ride. That’s all to the better because it’s not just a matter of covering Grateful Dead songs, as their blues and R&B repertoire were often themselves covers of other artists, including old-time classics brought forth with the unique Grateful Dead sound.

Those kinds of selections included essential blues canon from the 1920s and 1930s like “Good Morning, School Girl” by Sonny Boy Williamson; “Big Railroad Blues” by Gus Cannon, who helped popularize jug bands in the 1920s and 1930s; and “See That My Grave Is Kept Clean” by Blind Lemon Jefferson, recorded in 1966 by the Grateful Dead as “One Kind Favor.”

Late ’50s and early ’60s songs like Bobby Bland’s “Turn On Your Love Light,” Jimmy Reed’s “Big Boss Man” and the stark, haunting Willie Dixon song, “Spoonful,” first recorded by Howlin’ Wolf but popularized by British rock power trio Cream, became part of Grateful Dead live shows. “Around and Around,” a 1958 Chuck Berry rock song that was the B-side to his classic single “Johnny B. Goode,” Grateful Dead played in concert over 400 times.

There is a certain irony and double-meaning to naming the band Blues Is Dead. On the one hand, it honors the fact that the Grateful Dead brought so much of it and its deep flavors to a new audience, in their own distinctive voice. On the other, Ellis and his experienced collaborators definitely proved that blues is not dead, with their compellingly passionate and vibrantly visceral performance, and it didn’t hurt to have the legacy of the Grateful Dead serve as a kind of lens to help draw focus on the fact that blues is very much alive and kicking.