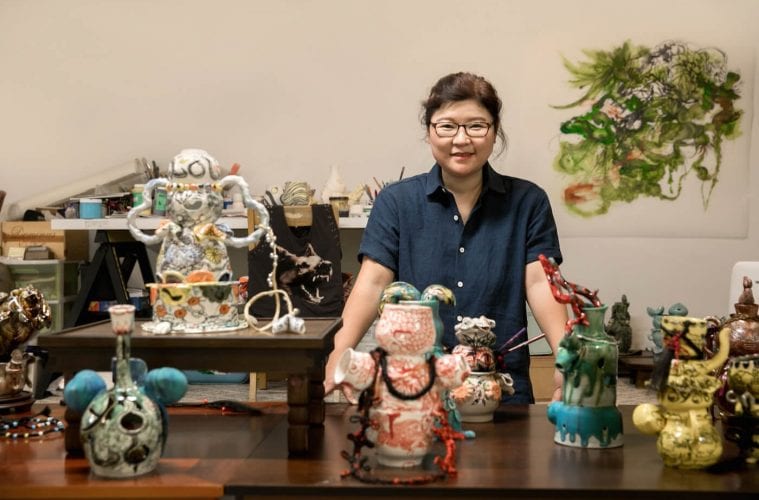 “My work often deals with people’s common misunderstanding of racial misconception and cultural appropriation,” says artist Jiha Moon. Her multimedia compositions encompass iconography referencing popular culture in contrast to age-old tradition. Evoking her own Korean ancestry through the use of materials like Hanji paper, Moon launches into a deeper exploration to identify connections among world cultures.

Peaches. Angry Birds. Fortune cookies. Emojis. This recurring, brightly colored imagery can be found throughout Moon’s artistic lexicon. This distinct blending of Eastern and Western symbologies creates a unique, visual language recognizable to an international community of digital consumers. “Peaches in Asian manuscript painting, in Korean paintings, [means] that it chases the bad spirits away. People also put peaches on the masks on doors so bad spirits cannot come in. So the peach has a spiritual aspect. The peach, here, is a Southern symbol – the Georgia Peach. I love that irony, that it’s my hometown’s sign and at the same time chasing away spirits in Asian culture (not just in Korea but in Japan and China as well). It’s something novel, something historical, something kind of cheesy and something kind of ironic. And some people look at my peaches as a body part. So I collect the iconography from different cultures and use it in a different way.” Moon pulls inspiration from life into the subject matter of her work. “I am an observer – looking at people and their culture all of the time. I see their trends and behaviors, listen to their stories and infuse that into my work. My biggest influences are people that I encounter in everyday life rather than art history books or artists. So, of course, you can imagine popular culture is part of my story. I often use those logos, historical patterns (blue willows, blue onion, blue and white paisley), folk art references (Pennsylvania Dutch or Minhwa), or certain color relationships as if they are actors in my work.” Experiencing her work in the round, a story unfolds in the overlapping symbols traced along material surfaces.

These fine illustrations embody a personal narrative as well. “It’s a loaded question whenever anyone asks where I’m from. I’m not just from one place. My last ten years, I’ve been in Atlanta. From outside I look Asian, but I have all these layers that become part of my identity that people misunderstand.” Throughout her career, Moon has transformed object into painting and painting into sculpture. She alternates between media as a way of storytelling with attention to the formal techniques of each craft. Her recent exploration of traditions in mask-making does just that. This latest series brings together ceramic sculpture, found object and illustrative painting in a way unprecedented. “I believe [in] the power of objects . . . that paintings don’t inherit to begin with. I always call [a] painting ‘cocky boyfriend’ that doesn’t do much but takes the most beautiful white wall space in noble gallery . . . that often scares people away. But think about the object. Who doesn’t want to touch objects that are so tempting on the shelves? So I want to make my ceramic sculptures like that. They are inviting and friendly.” Blending media also reinforces the multiplicity of her work. The form draws the viewer in while painted details maintain an ornate allure.

Moon was born and raised in Korea, where she also completed undergraduate and graduate degrees in Fine Art. She later earned an MA and MFA at the University of Iowa in pursuit of a career teaching in universities. She is an Atlanta resident whose artwork has been exhibited nationwide. Pieces have been acquired by collections including The Museum of Contemporary Art of Georgia (Atlanta, GA), High Museum of Art (Atlanta, GA), Bank of America (Atlanta, GA), Mint Museum (Charlotte, NC), Weatherspoon Art Museum (Greensboro, NC).

A solo exhibition of Moon’s work cocurated by Mark Sloan and Amy Moorefield  is currently touring the US in Double Welcome, Most Everyone’s Mad Here scheduled to show at the Richard E. Peeler Art Center from August 25, 2017 through October 29, 2017; Tarble Arts Center from November 18, 2017 through February 4, 2018; and the American University Art Museum from March 31 through May 20, 2018.

Moon is one of four finalists for the Hudgens Center for the Arts’ 2017 Hudgens Prize. This will be the second time she has been nominated, being a 2011 Hudgens Prize finalist. Winning this award would allow Moon the opportunity to stretch as an artist, growing into the direction a new line of experimentation has taken her.