The day before opening, two closed-off floors in the Anne Cox Chambers wing at the High Museum reverberate with the bang of hammers and the buzz of drills as a bustling crew of assistants help prepare for artist Daniel Arsham’s new exhibition, Hourglass.  A panicky but convivial, almost giddy, mood hangs over the various tasks and sudden problems, as does an inevitable, nail-biting question: Will it be ready in time? To a visitor, the answer pretty much looks like no. Standing quietly to one side, a surprisingly Zen-like node of calm directing this storm of activity, is the artist Daniel Arsham.

(Courtesy of the artist and Galerie Perrotin. Photo by Guillaume Ziccarelli.)

“We’re having some issues with the sand,” he says, pointing to one of four large plinthed hourglasses. He sounds more amused than frustrated when he describes how the thick blue crushed-crystal grains tend to get stuck in the hole between the bulbs, more coarse than the quartz crystal sand used for the remaining three hourglasses. The installation is the first he’s made with hourglasses. Although working with these objects is somewhat new to him, each of them contains, buried in the crystalline sand, the sort of sculptures familiar from his most famous works: discarded technological objects — cameras, phones, electronic devices — also cast in crystal.

With a slow, careful move worthy of a ballet dancer, Arsham turns one of the functioning hourglasses. He watches as the beautiful, white crystallized powder begins to sift down, and the object above, a camera, is revealed and the object now below, the Pompeii-like cast of a pair of human hands, begins to be buried. “One of the things I’ve tried to do with the work, and this is almost impossible,” he says, “is to forget the meaning of some of the objects.”

At the time of this visit, the show is still a little hard to picture in its completion, but he explains that the entire installation will eventually form a sort of hourglass itself. One floor up, above the lobby, a full-scale Japanese teahouse is being constructed with a dry Zen garden of blue sand, the same sort that will eventually be piled near the hourglasses below.

Performers — downstairs a 12-year-old child and upstairs an 83-year-old man — will activate the exhibition from time to time by turning the hourglasses and raking the sand garden. Upstairs is also Arsham’s Amethyst Sportsball Cavern, a piece which debuted in his first-ever solo show, Circa 2345 at Galerie Emmanuel Perrotin in New York last year. It’s a dark, trippy, maze-like cave of soccer balls, basketballs and volleyballs, all cast in amethyst crystal, quartz and hydrostone. 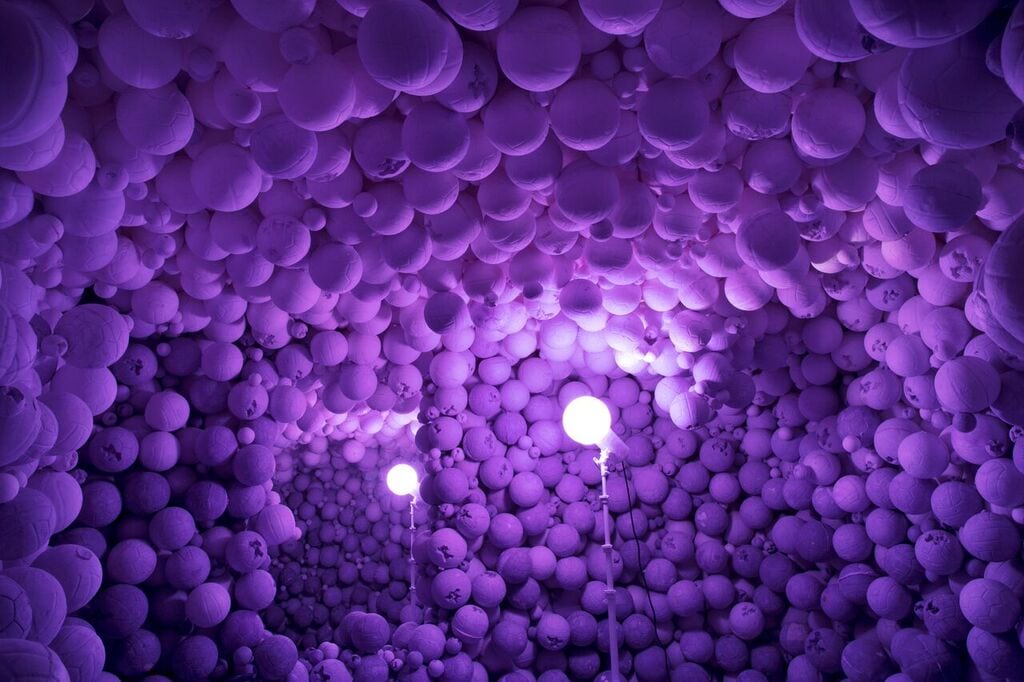 The installation suggests, as does much of Arsham’s work, a sort of fictional archeology of the future, as if thousands of years from now the ordinary objects we use every day — from keyboards to headphones — have become compacted and fossilized through geological processes and then unearthed. The familiar things seem foreign, haunted, their original meaning and purpose somehow elusive as they’re transformed into artifacts of mystery, even veneration.

Arsham insists that the things he makes are merely tools to help initiate contemplation; he deliberately tries to keep his work from “meaning” anything, he says. “It’s an invitation to rethink your surroundings and the things that populate everyday life,” he says. “I wanted the things to look old and decayed. Rather than painting them like a trompe l’oeil effect, I felt a little bit more the weight of it, and the truth of it was stronger, if they were made of materials we associate with geology.” Crystal, volcanic ash, obsidian, pyrite — he utilizes a number of different materials that function to represent everyday objects of the present as if they’re artifacts from the ancient past.

Arsham grew up in Miami. After hiding in a reinforced closet during Hurricane Andrew, which swept through Florida in 1992 when he was 12, he emerged to find a home where the walls had been ripped apart and the family possessions and electronic devices scattered into useless piles, an early, formative experience. “I don’t remember it as traumatic,” he says. “It was just sort of fascinating.” He attended New York’s Cooper-Union to study architecture, and with former fellow student Alex Mustonen, he founded the New York-based firm Snarkitecture. His output across the arts, from stage design and visual art to film and architecture, has been enormous and varied, often blurring the boundaries between the disciplines.

The High installation’s splashes of vivid blue in an otherwise monochromatic visual field are not insignificant. The artist is colorblind, and about two years ago he started wearing special lenses that help broaden the spectrum of colors he can perceive. Arsham says the glasses worked, but that looking at the world that way was, for him, too intense, almost psychedelically overstimulating and ‘like a game.’ “I’ve used them in the work to broaden the scope of color,” he says. “But after a while I became distracted by the glasses, I stopped wearing them. I use them when I’m selecting color so I have a more objective sense of what it is . . . But I’m not doing rainbows. A lot of my work still remains in a neutral palette, black to white. I’ve kept the reductive quality.” 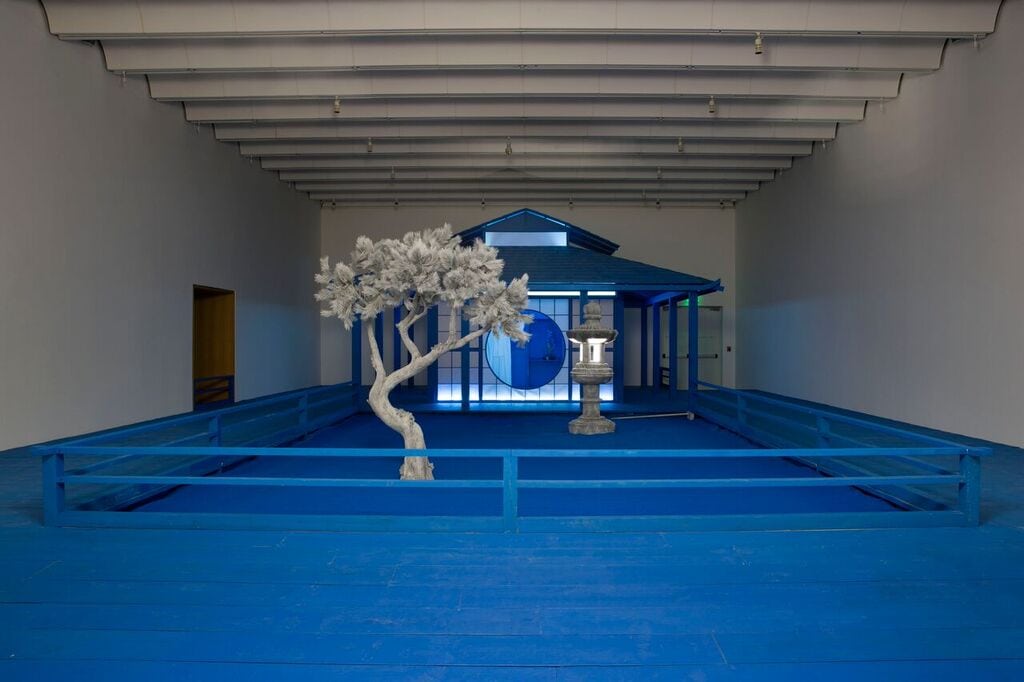 (Courtesy of the artist and Galerie Perrotin. Photo by Guillaume Ziccarelli.)

A similarly reductive, meditative quality will guide the other works Arsham is creating as part of his Atlanta residency: two scenographies for Atlanta Symphony Orchestra performances in Symphony Hall. “They’re separate works, but the ethos of them is consistent,” he says. The ASO performances of Christopher Theofanidis’ oratorio Creation/Creator from March 23 to March 25 will include projected film Arsham has edited together from his extensive body of work.

Performances of Christoph Willibald Gluck’s opera Orfeo et Euridice May 11 and May 13 will use a palette, all blue and white, related to the Hourglass installation for the minimalist stage design and include movement from Atlanta dance company glo. Though he’s designed for many performances before — he got his start by designing stage pieces for renowned choreographer Merce Cunningham — this will be his first foray into the realm of opera.

During our talk Arsham himself is unruffled and unhurried, but things are so hectic in the gallery that it seems the considerate thing to do to keep the interview short and sweet. On the way out, coming into the space is Atlanta choreographer Lauri Stallings, who for the past several months has been working on creating movement for the two performers in the installation, as well as the dances for her company glo for the ASO performances of Orfeo. Although this is her first time working with Arsham, the two of them as artists have always seemingly shared some similar preoccupations, primary among them: time.

“His ongoing narrative is about historic artifacts, things that have been left behind but are also of the future,” she says. “I have a parallel universe, it’s just of the body. We’re both working within strange systemic forms that have gaps for anything to happen . . . People, if given the opportunity, their idea of time begins to stretch. It’s incredibly elastic. He’s given me a portal into his concept of time. That’s a gift.”

The exhibition opened on schedule on March 4. Daniel Arsham: Hourglass will be on view at the High Museum of Art through May 21. The Atlanta Symphony Orchestra performs Christopher Theofanidis’ oratorio Creation/Creator from March 23 to March 25 with scenography by Daniel Arsham, and Christoph Willibald Gluck’s opera Orfeo et Euridice May 11 and May 13 with stage design by Arsham and choreography by Lauri Stallings and glo.