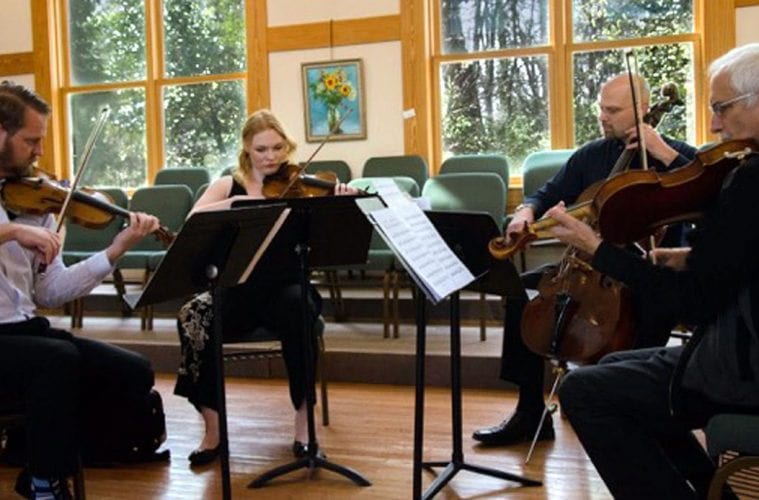 The fun, memorable concert was yet another fine example of the increasing presence of excellent arts presentations that are taking place outside the perimeter in metro Atlanta. That UUMAN is an attractive and easily accessible location for a chamber music concert is another happy boon. Its simple architectural lightness and credible acoustics are a joy. It has become the Riverside Chamber Players’ home venue in recent seasons, much to their credit and to the benefit of Roswell’s arts scene.

The program opened with Quatuor pour cor anglais, violon, alto et violoncelle (1970) by Jean Françaix, better known in this country as his English Horn Quartet. The cor anglais, or English horn, is neither English nor a horn; rather, it is a close kin of the oboe with a range that’s a fifth lower. The double reed mouthpiece is attached to a bent tube, called a “bocal,” inserted at the instrument top — hence the source of its curious name (“English” as in “angled”).

Its combination with strings in this piece by Françaix makes for a great exhibition of the instrument’s lyrical and sonorous qualities, especially given the composer’s distinctively French neoclassic style. Throughout the piece’s five contrasting movements, Françaix retains a certain wit and lightness of being in the interplay between the instruments, making for pleasurable listening. The Riverside Chamber Players brought those signature characteristics to the fore in their performance.

The second part of the program was the world premiere of Michael Kurth’s String Quartet No. 2, subtitled “Some of a Sudden.” The subtitle is a play upon the odd but poetic phrase “all of a sudden.” Like many now-familiar English expressions, “of a sudden” was coined by William Shakespeare in his play The Taming of the Shrew. Before Shakespeare, “of the sudden” was the commonplace. Both substitute for the less elaborate “suddenly.” What Kurth takes issue with in the modern phrase “all of a sudden” is the premise of “all” — why not “some” instead? 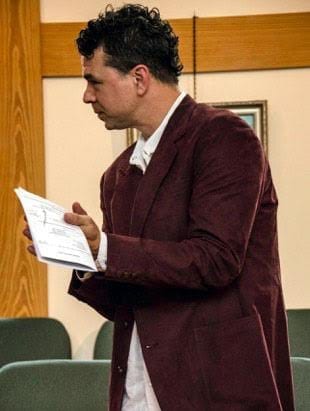 English is often a funny language, indeed, and Kurth — also a member of the ASO — is one of those people whose sense of humor instantly recognizes its curiosities, with the consequence that they wind up in the titles of his music, both overall compositions and their component movements. That provides some key insight into the mind of the composer and his music, even when a title only serves as a marker rather than a descriptor. With Kurth, bets are usually off as to which is the case, or both. His colorful and occasionally bizarre capacity as a wordsmith is near equal to his capacity as composer. Likewise, both in his hands can be profoundly expressive.

Although the printed program came without notes, Kurth later provided me with some evocative descriptions of the four movements of his Quartet No. 2:

The opening movement, “Parasomnia,” in the composer’s words, describes “a sleepless night [that] looms ominously in the dark corners of your bedroom. Then the steady tempo draws you into the rhythm of wakefulness, and you resign yourself to spending the small hours alone, hoping you’re good enough company for yourself.”

The scherzo-like second movement, “Murmuration,” portrays “the sound of birds creating spontaneous kinetic sculpture.” In contrast, the third movement, “Brick Teeth,” features a stilted, clumsy Latin tune that offers up “the feeling of frustrated momentum as your seat belt locks when you hit the brakes a little too hard.”

The fourth and final movement, entitled “Ardor,” is described by Kurth as “a love song, a longing song, a song about how being in love is simultaneously perfectly fulfilling yet never enough because loving the person grows your heart and it fills again but then it grows again, always needing to love more.”

To that, one might serendipitously return in response to Shakespeare and the salient line in The Taming of the Shrew that makes precedent to the Quartet‘s title, where Tranio says to Lucentio,

I pray, sir, tell me, is it possible
That love should of a sudden take such hold?

To which Lucentio replies:

O Tranio, till I found it to be true,
I never thought it possible or likely;
But see, while idly I stood looking on,
I found the effect of love in idleness:
And now in plainness do confess to thee,
That art to me as secret and as dear
As Anna to the queen of Carthage was,
Tranio, I burn, I pine, I perish, Tranio,
If I achieve not this young modest girl.

That is a passage I found by chance. Kurth, when asked, said he was unaware of it. Art and its unintended connective coincidences can be serendipitous things indeed, discovered on a sudden when we least expect them.