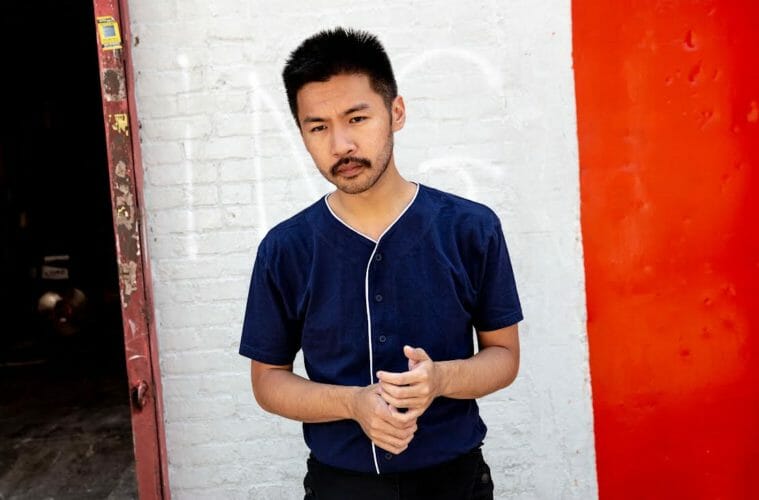 Tao, whose Violin Concerto makes its world premiere this weekend with the Atlanta Symphony Orchestra, is considered one of the most talented up-and-coming composers. (Photo by Kevin Condon)

Go way back, back to Bach’s era, when music students were typically taught an instrument and to write music at the same time. That was normal. Even a century ago, Rachmaninoff would dazzle at the keyboard, and his thunderous piano concertos remain box-office favorites. In pop and almost all other music, composer-performers are of course the norm. But in our age of hyper-specialization in concert hall music, the hybrid has become rare, although a composer like Thomas Adès might conduct his “The Exterminating Angel” at the Metropolitan Opera one night and play his own piano works or Schubert another night — and he’s all the more celebrated for his versatility.

Just 27, pianist-composer Conrad Tao is among the brightest lights in the old tradition. The Atlanta Symphony Orchestra will give the world premiere of his Violin Concerto in concerts Friday and Saturday, with the composer’s frequent collaborator (and another regular Atlanta guest), violinist Stefan Jackiw, as soloist. The conductor, Robert Spano, now carries the title of ASO “co-artistic advisor.” Tao will sit with the audience and listen. 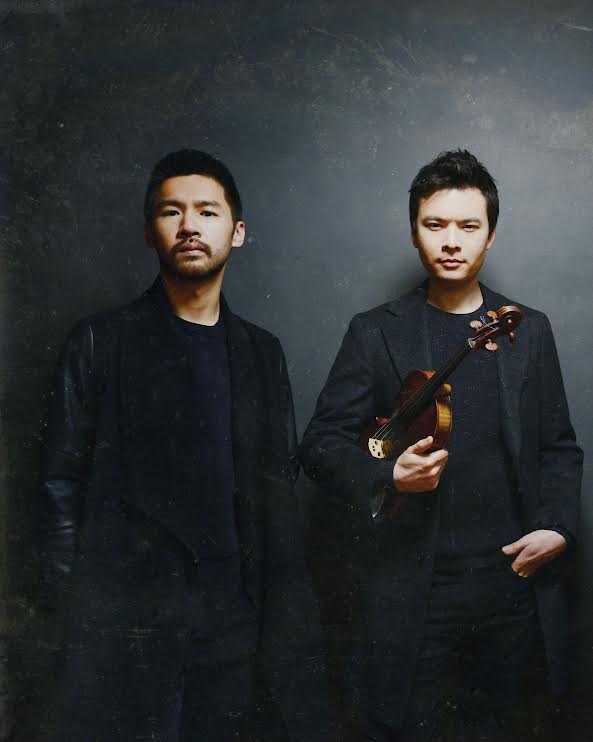 Tao and violinist Stefan Jackiw have a long and close musical relationship. (Photo by Shervin Lainez)

The critics are following Tao’s every move, with lengthy profiles from the New York Times among them. “Conrad is a unique variation on the traditional virtuoso performer-composer,” Thomas May, a West Coast music writer, wrote to me in a text. “His composition is inseparable from his explosive, wildly imaginative persona at the keyboard. There’s also the feeling that, because of his youth, he can unfold in so many directions.”

“Yeah, I’m a bit of a show pony,” the composer says, speaking on a recent Zoom call (with Jackiw the other square on the screen). “I have a real curiosity of getting a story across to an audience, somehow.”

As performers, the collaboration started several years ago when Jackiw (pronounced jah-KEEF) and cellist Jay Campbell were discreetly fishing around for a pianist to form a trio. They knew of Tao’s reputation, and without calling it an “audition,” scheduled a get-together, which happened in Tao’s NYC apartment. (He had the best piano.) Instant chemistry. The Junction Trio, a riff off their initials, JCT, was soon performing widely.

Digging inside the new concerto

That Tao would write a concerto for Jackiw seemed inevitable. They spend a lot of time together on tour with the trio. While waiting in airports and on long car trips, they’d talked about a major new work. “I was dreaming up a lot of different pieces in my head,” Tao says. “Ultimately it came down to thinking what I wanted to hear from Stefan. That’s always motivated me, knowing [his] playing as well as I do, what can I get that I don’t usually hear, aspects of his playing that I want to get inside of.” (Disclosure: In a past job, I hired both Tao and Jackiw to perform as concerto soloists with an orchestra.)

As a capable violinist himself, Tao knows the violin literature. “I felt a deep desire to highlight what the instrument was capable of doing that I don’t access in my life as a pianist,” he says. “I kept thinking about line. My music generally is about line. Hearing Stefan take the long melodies, long singing lines, and interpret them with his instrument made me excited to hear my melodies anew, maybe thinking about sustained sound in a different way.”

His thought process grows expansive: “I just wanted to follow the line, see how endless the line can be. It’s a composite line: Could you feel a continuous line across different dimensions? What if there’s a lot of silence? Could you feel the line as it travels through the orchestra? That was all being dreamt up.”

Given the technical challenges of the violin, even seasoned composers often rely on their violinist for guidance. Take Brahms’ epic Violin Concerto. The symbiotic relationship between composer and violinist Joachim is legendary — the violinist helped the composer rewrite extended passages to make them more “violinistic.”

Jackiw laughs at the suggestion: “I can’t think of a single passage where I had to say ‘Hey, this isn’t idiomatic for the violin.’ But there are moments where he asks for an extended technique, or a notation that I’m not familiar with, and . . .”

Tao jumps in: “It sounds ludicrous when I say it out loud, but I’d take Stefan’s violin and show him.”

Jackiw finishes the thought: “If I ever had the urge to say ‘This is unplayable,’ I had to carefully gird myself for the fact that Conrad could probably play it himself on the violin.” 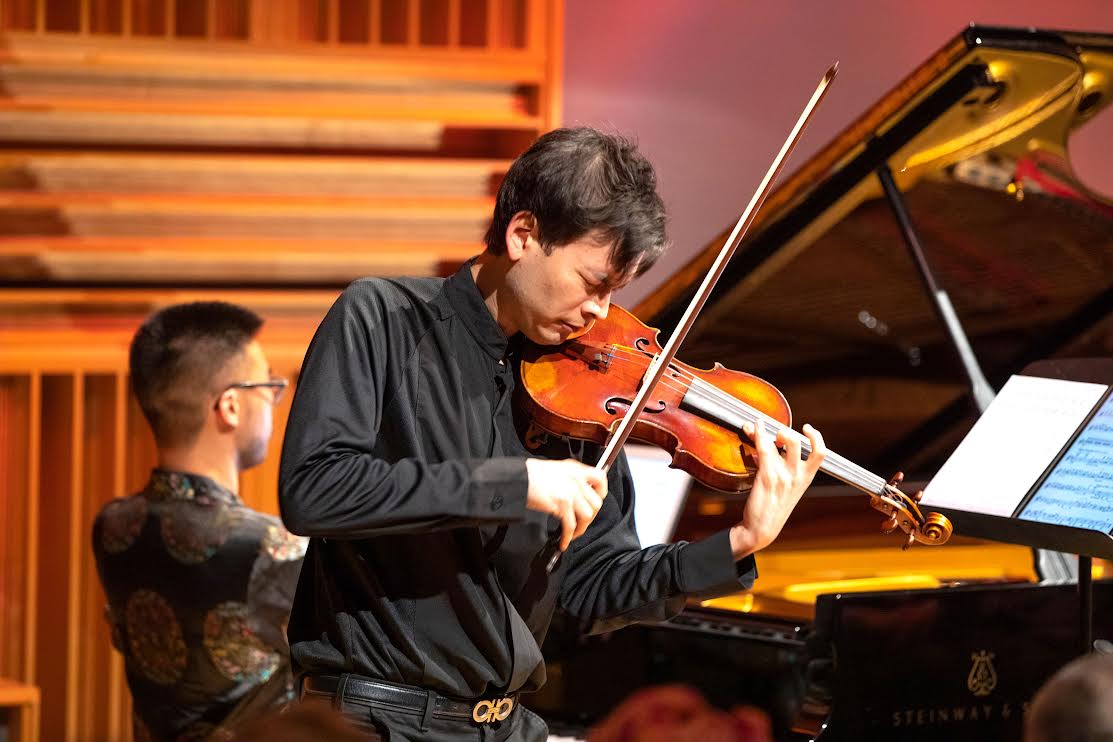 Tao and Jackiw performing together at Boston Symphony Hall

Tao’s new violin concerto is outwardly traditional, in three movements, with the soloist at times soaring above or embedded within the orchestral textures. But there are few interpretive descriptors in the score, and only the middle movement has an actual title, “Song.” It’s in the simple and eternal form of AABA, like a folk song.

But what does the music sound like? “There’s a lot of humor, in the outer movements, and Conrad describes parts of it as the violin surfing through the orchestra. As a violinist, structure isn’t the first thing I’m drawn to. But I was struck by how structurally rigorous it is, especially the first movement. Once that’s pointed out to me, as a performer, that makes the work easier to digest.”

The “Song” movement is “quintessential Conrad,” Jackiw continues. “There’s a tender fragility without ever feeling sentimental. There’s a delicacy, in the middle section, with harmonics in the violin that conjures an ethereal, silvery line that I really love.”

In considering Tao’s development as a composer, Jackiw notes he was struck by how different this work is from the Piano Trio he wrote in 2019 for The Junction Trio. There are shared elements, but Jackiw says the Piano Trio is about something. It’s not a narrative, but there’s an inspiration behind it.

“The concerto, maybe more abstract, is also more extroverted, while still maintaining what touches me about Conrad’s music,” Jackiw says. “That sense of being rhapsodic and free, there’s a delicacy to it.”

For his part, Tao confirms, “My pieces tend to have some narrative content floating around in them, something that I’m thinking about in a bigger-picture sense. That said, the potential abstraction and expressivity of gesture and shape and relationships and materials — I’m always thinking about it. The violin concerto comes out of me, so there are a lot of things in it.” 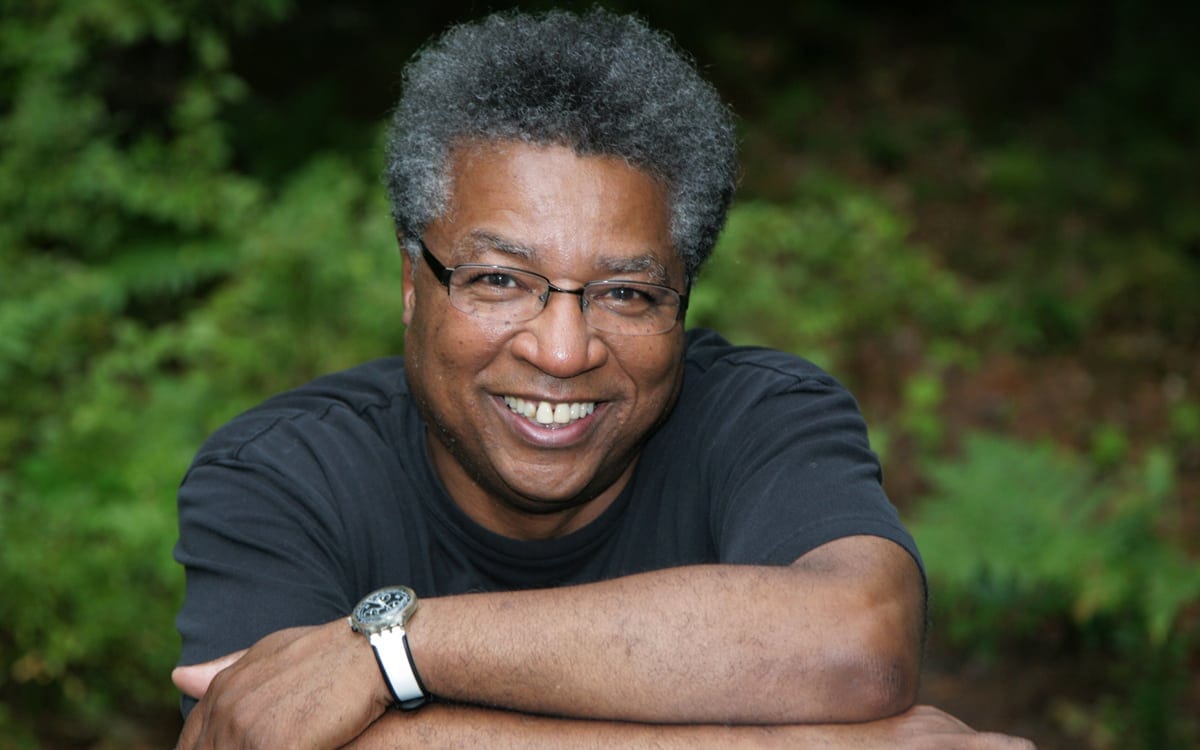 Atlanta composer Alvin Singleton’s “Different Rivers” was commissioned by the ASO in 2012 and will be performed this weekend. (Photo by C. Watson)

True to form, each work on Spano’s program complements the others. After the premiere of Tao’s Violin Concerto and after intermission, the great Atlanta composer Alvin Singleton is heard with “Different River,” an ASO commission from 2012, described as “a single-movement work that follows the ebbs and flows encountered on the journey of life.”

The concert opens and closes with Richard Strauss tone poems about two unsavory characters: “Don Juan” is the start. At the end comes “Till Eulenspiegel’s Merry Pranks,” where the hero is a trickster from German folklore. Strauss once boasted that he could depict a knife and fork in music, which is not inaccurate. The music is stupendous, but I’ve never found this particular narrative, which you hear in detail in the music, especially compelling. Till is a nasty piece of work, backed by a large, exuberant orchestra.

But a 2020 novel, Tyll by Daniel Kehlmann (translated from the German by Ross Benjamin), completely changed my perspective. Set in the destructive Thirty Years War in the first half of the 1600s, the story follows a young man who’s too clever, too charismatic, for village life. After his father is judged by the Inquisition and hanged as an alchemist, Till meets up with traveling performers — acrobats, magicians, a ventriloquist — and our deeply cynical protagonist uses his shape-shifting skills to outrun war and religious corruption and maybe to cheat death itself.

The novel explores who gets to control the magical world — the common folk or the church? Vivid, subtle and often wise, Kehlmann’s Tyll is worth a read, even if it’s not a study guide to “Till Eulenspiegel.”