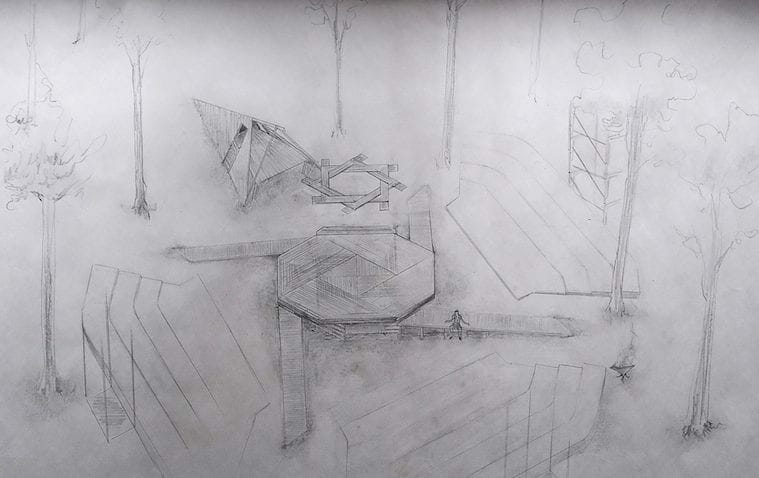 This sketch by scenic designer Barrett Doyle shows what he planned for Serenbe Playhouse's "Spring Awakening." Because of the coronavirus, the musical has, at best, been postponed. (Photo by Barrett Doyle)

If today was a normal Thursday, Barrett Doyle would be making final tweaks to his scenic design for Serenbe Playhouse’s Spring Awakening. But it’s not a normal Thursday, and the show won’t open tomorrow. Serenbe Playhouse, like every other theater company in metro Atlanta, has gone dark until it’s safe to socialize again in the age of coronavirus.

For the record, Serenbe Playhouse may produce the musical later this season. “I can’t define what scenic design is,” Barrett Doyle says. “I can only say what it is to me.”

Doyle, 32, is a sort of theatrical jack of many talents. He acts, designs scenery and is a founding member of Catalyst Arts Atlanta, created by six Atlanta artists, performers, storytellers, designers, craftspeople and filmmakers who make theater their way.

It’s no surprise then, that Doyle doesn’t think of himself fundamentally as a scenic designer. He sort of fell into it.

He graduated from SCAD in 2009, where he studied architecture, filmmaking and performance. He landed an acting internship at Actor’s Express. He’s been onstage at the Express in 100 Saints You Should Know (2010) and Seminar (2013), at Aurora Theatre in Tigers Be Still (2012) and at Georgia Shakespeare in Metamorphoses (2013). Last month, he was seen in The Importance of Being Earnest at Theatre Buford.

His first set design happened almost by coincidence, in 2015. He was performing in Catalyst’s Trestle at Pope Lick Creek at what was then the ArtsXchange. Collaborator William Joel Coady was to design the show.

“The first meeting we ever had,” Doyle says, “I just had my notebook and sketched what I thought the set might look like. In the script, there’s this trestle overhead that the writer described as skeletal and looming over the space. So I just saw that and drew it. And they decided, “That’s what we’re going to do.”

That production and Doyle’s design created a lot of buzz in Atlanta theater circles. He received a Suzi Bass Award nomination, which led to regular design work. He won a 2019 Suzi award for building a mountain inside The Bakery Atlanta for Catalyst’s staging of K2. He created Middle-earth at Synchronicity Theatre, complete with a revolving platform for acrobatics and stunts, for The Hobbit in January. And he previously turned the Synchronicity stage into the court of King Henry VIII and environs for 2016’s Anne Boleyn.

“I can’t define what scenic design is,” Doyle says. “I can only say what it is to me.” The realized set of “Spring Awakening” at Serenbe Playhouse, which performs all shows outdoors. (Photo by Marium Khalid)

For Spring Awakening, he envisioned a lush and wild commune surrounding an oppressive environment. The musical is based on a 1906 play about students in late 19th-century Germany growing from adolescence into adulthood in the midst of a harsh and strict society. When the piece became a Broadway musical in 2006, creators Duncan Sheik and Steven Sater turned it into an electrifying fusion of morality, sexuality and rock ‘n’ roll.

Doyle remains surprised by the chain of events that have shaped his career.

“It’s really humbling and a little destabilizing,” he says. “I have a little bit of an impostor syndrome. Going into spaces, I’m not the authority on how this has to be. I just have a vision of something that could be. I try to stay grounded about that.”

He credits his Florida family for his carpentry and architectural interests. His parents and grandparents are builders. As a teen, he helped them remodel old houses. “Even when I was that young, I was having conversations about reimagining spaces, seeing their potential, finding a new way to look.” Because of that, he’s now able to walk into a space and imagine how it might be transformed to fit a story. Barrett Doyle (right, with acting colleague Josh Brook) in “The Importance of Being Earnest,” Oscar Wilde’s “trivial comedy for serious people,” at Theatre Buford. They played 19th-century English gentlemen who create fictitious identities to avoid the social obligations of the day. (Photo by Casey Gardner)

For Spring Awakening, he took the wooden platform of a traditional stage and added spirals, designs and shapes that radiate away and into the outside world. Serenbe’s outdoor venue complements the notion that, just beyond this town, a more open-minded community exists that won’t destroy these characters.

“It is pretty subtle,” Doyle says. “In a lot of ways, it’s meant to be evocative of European themes, pagan themes, rites and rituals. I’m keeping the set spare and natural.”

Doyle draws inspiration from filmmakers David Lynch and Ari Aster, directors who frame their shots in ways meant to change the audience’s perspective, suggesting dollhouses or odd points of view. For BOY at Theatrical Outfit (2017) and Night Must Fall at Georgia Ensemble Theatre (2019), he played with angles of traditional sets.

“Instead of looking at a flat back wall in a traditional living room, we change it so that you’re looking at a corner,” he says. “Architecturally, that interests me because it shifts the floor plan to be at a diagonal from the audience. The character of the space informs the telling of the story, the design and the experience of the audience.”

His next project was to be the Arís! staging of Fighting Words, scheduled to open April 10. It has been shelved, too, at least for the moment. The drama takes place in a kitchen where several Welsh women listen to a boxing match. Doyle says his kitchen set will feature hints of a boxing ring. Barrett Doyle won a Suzi Bass Award for his design of “K2,” produced by Catalyst Arts Atlanta in 2019. The action took place high on a mountain in frigid temperatures for actors and audiences. (Photo by Barrett Doyle)

He remains part of Catalyst’s core group, which has staged three productions in its five years — Gruesome Playground Injuries (2017) as well as The Trestle at Pope Lick Creek and K2. The company creates and performs only when it can find the right space and the right show at the right time.

Look for a decision on its next project this summer, Doyle says. For Catalyst, it’s often about finding the space and script at the same time, or finding a space that suits the script. K2, for instance, required building a mountaintop, a base camp and audience space, and surrounding everyone with frigid temperatures and snow.

“It was the question inherent in the play,” Doyle says. “Why do people climb mountains? Why do we take on tasks that expand our sense of self or our capacity? With Catalyst, you know that you have people with you who are going to dive in as deep as you will. They are going to hold an idea of what an experience for an audience can be and what creating a piece of art in theater can be. Collaborators make you brave.”

In times like these when we are separated by necessity, ArtsATL is needed more than ever. Please consider a donation so we can continue to highlight Atlanta’s creative community in this unprecedented period.