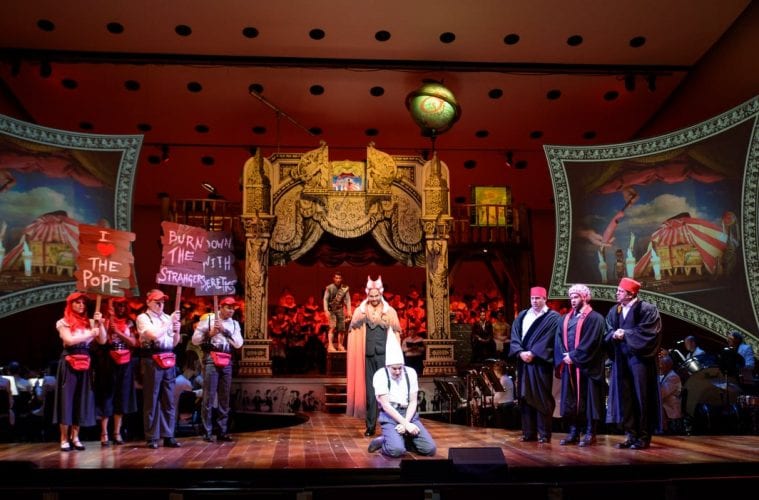 Collaborative “Candide” brings some highs, some lows for ASO and Alliance

The new production of Leonard Bernstein’s Candide at Symphony Hall represents a historic collaboration between the Atlanta Symphony Orchestra and the Alliance Theatre. Humbly treading a parallel path, ArtsATL asked classical music critic Mark Gresham and theater critic Andrew Alexander to get together to discuss opinions after opening night.

Mark Gresham: Whether you want to call it opera, operetta or musical, Bernstein’s Candide has had a fairly motley history. My own first experience of it, as live musical theater, was in New York in 1974, the so-called Chelsea production by Harold Prince, with what was at the time a new book by Hugh Wheeler. It really stuck in my mind. That particular production was important as the first version of Candide to be a box office success. What’s been your own experience with Candide, Andrew?

Andrew Alexander: I’ve read Voltaire’s Candide a couple times. A few years back, I happened to attend an event honoring poet Richard Wilbur during which singers performed some of the songs from Candide for which he wrote the lyrics. Other than that, this is really my first time seeing the show. As popular as it is, it hasn’t been produced in Atlanta often. It sounds like we’ll have the perspective of a lifelong admirer and a first-timer, so that’s perfect. Why don’t we start with the one more familiar with the work. What’d ya think?

Gresham: Knowing this would be semi-staged, I put aside expectations in order to view it with a fresh mind. I felt pretty good about it through the Overture and the first three numbers. To be quite honest, the book then began to feel somewhat “stapled-together” through the end of the first act. Act Two continued further down that path, until I felt it unraveled completely just before the heart-moving final chorus saved the ending. Call me a cynic, but I was dismayed. In short, I didn’t care for this version of the opera’s book.

Alexander: I certainly see where you’re coming from, and I suspect most audience members will agree that there is something about Act Two that drags. But all in all, I think I was far better pleased by this than you were. For a concert staging, it is pretty inventive: it often doesn’t feel like a concert staging at all. Todd Rosenthal’s set design utilizes the tiny space well, and director Susan Booth’s addition of a puppeteer is colorful and inventive. (Voltaire’s plot has incidents, such as a volcano erupting and ships sinking, that are hard to bring to any stage, much less one about the size of a three-by-five note card). Matt Acheson’s charming puppetry is performed live at center stage and also projected onto screens at both sides. The combination of the Baroque set piece with that high-def video showing hoaky, homespun puppetry is just a totally surprising and original mash-up of different visual elements and styles. I’m curious to hear what you thought about the sound of the work. This staging has the orchestra placed sort of on its side, and though I didn’t dislike it, it certainly makes the symphony sound different. What did you think of the arrangement of instruments and the overall sound of the piece? Gresham: This falls to the ASO’s “theater of a concert” concept, which I think in this instance was not a good choice. Rather than merging the best of both concert or theater, we got a hybrid (that’s the nice word), which did not play to the better aspects of either. Fully staged shows, with the orchestra in the pit, have been successfully done in Symphony Hall, to good effect: Bernstein’s MASS in June 1975, and a production of Marc Blitzstein’s opera Regina in January 1985 come to mind. With the orchestra sitting side-saddle onstage, it sounded a little fuzzy-edged and vague at lower dynamic levels. Nor did I think it assisted the singing actors in terms of their coordination with the orchestra. As for the set and puppetry: In general, I dislike puppets about as much as I dislike clowns, but Acheson won me over with a kind of Terry Gilliam-ish wit. Clever details, like the puppeteer (God) burning his fingers when touching the cone of the spent volcano, caught my attention. It worked surprisingly well, especially given how Rosenthal’s set had to divide up stage space, not only making room for the actors in the midst of the orchestra, but also allowing for placement of the chorus. The chorus sang well, though their presence was visually diminished, ensconced as they were behind the facade of the set piece.

Alexander: I don’t mind not seeing the chorus much, but yes, they sound fantastic. There really is nothing like a full chorus, and that’s a rare element in theater: you might occasionally hear a musical performed with a great orchestra, but with a full chorus, and one as distinguished as the ASO’s, is a true rarity. I loved every part that included their participation. There is just a grandeur, fullness and depth there that nothing else can give. I also loved how much the production calls on ASO music director Robert Spano . . . to act. It’s hardly news anymore, but he is a man of many talents. He has remarkable focus as an actor, and some of the biggest laughs of the evening actually belong to him in a few brief but crucial moments. Speaking of which, what did you think of the principal players? The casting is interesting in that it places classic operatic voices in some lead roles, such as tenor Aaron Blake as Candide, alongside performers such as Terry Burrell as the Old Lady or Christopher Sieber as Pangloss, who come to their roles with a more theatrical, Broadway-musical style and approach. Thoughts?

Gresham: First, let me comment on Spano having to be an actor. That’s one of the things you must do if you are a musician onstage in a theatrical work. You are not only a musician, you are also obligated to play the role of one, even if in stage demeanor. That Spano was given theatrical elements beyond that minimum was a nice touch. I’m not surprised by the combination of operatic and Broadway voices. Of course, the role of Cunegonde really requires an operatic coloratura soprano for “Glitter and Be Gay,” for which the stratospheric range and vocal acrobatics are akin to the Queen of the Night’s aria in Mozart’s The Magic Flute. I disagree with people who say “Glitter and Be Gay” makes fun of operatic arias; on the contrary, it’s very much in the manner of late 18th-century bel canto showpiece arias. Clearly soprano Alexandra Schoeny has enough vocal chops for it. The other roles can mostly be handled by really good singing actors, in particular, versatile actors who can play multiple roles with multiple voices. Terry Burrell performs as the Old Lady and Alexandra Schoeny performs as Cunegonde in Candide.

Alexander: I was worried for Schoeny when “Glitter and Be Gay” started. The song certainly has a somber opening, but it came across as leaden and unfunny. By the end, however, it had become one of the evening’s best and most memorable numbers. One reason she had trouble selling the opening, I think, is that there are no supertitles. There should be. On a completely different note: I don’t have the experience of having seen other versions of the show, but I recall hearing that Lillian Hellman’s initial 1956 book for the musical was tossed aside as being “too serious.” Overall, I found this version too goofy, contemporary and facetious and wondered about giving the “serious” version another chance.

Gresham: Totally agree on the supertitles. As for Hellman’s original book, it was not tossed out; rather, Hellman withdrew it in response to a move to tone down the “auto-da-fé” scene, which was her personal artistic statement against the House Un-American Activities Committee, with which she’d had an infamous battle. A revival of that “more serious” book is not possible, because it is simply no longer available. But that’s okay, because Hellman’s book is primarily blamed for the original 1956 Candide being a box office flop, by Broadway standards. It died after only 73 performances in contrast with Harold Prince’s 1973 Chelsea version, with the Wheeler’s book, which ran for 740 performances and was the version that won Candide its first Tony Awards, not the 1956 original.

Alexander: Interesting. What did you think of this particular version? We got an auto-de-fé scene, no? That’s not Hellman’s? It seemed unlikely to stoke much controversy or disagreement, so I’m guessing it’s not hers.

Gresham: None of the scenes were Hellman’s. She completely withdrew her book from the opera. So Hugh Wheeler wrote an entirely new one for Chelsea, and every book since has been some modification of that. While Hellman was perhaps too serious, and Wheeler’s Chelsea original a genuine comic romp, the overall modifications in this Alliance version often seemed lame, “for the gag,” with poor comic timing. What could have been sharper and biting seemed dull and deflated. To what extent do you think this is acting and direction as much as the book itself? Alexander: It’s hard to say — not because I didn’t think this was too goofy and gaggy — it’s just hard to know where to place the blame. For all I know, some of it could be Voltaire’s fault. Candide is a great book, but no book is perfect. Again, I’m curious about Hellman’s version. Plenty of shows, particularly operas, flopped at opening and were later found to have strengths early audiences didn’t see. If, as you say, Hellman’s take can’t be performed at all nowadays, that seems a shame. Either way, this Jokey McDeuce version with its lame puns and silly gags didn’t appeal to me much.

Gresham: Something I wanted to say earlier is that playing multiple roles requires a bit more than changing costumes, including avoidance of using the same voice and speech rhythms for each; I didn’t feel all that much sense of vocal contrast when different roles were played by a single actor. For example, Christopher Sieber had two roles to play, the Narrator and Pangloss.

Alexander: I don’t fault Sieber in his performances as the Narrator and Pangloss. I like the use of his voice in both, though for some reason, his Narrator comes across far stronger than his Pangloss. The jokes across the board are often dispiritingly low, and many of the worst stinkers belong to those roles. Voltaire can’t be blamed for that.

Gresham: Frankly, I’d like to see someone revive the 1973 Chelsea version, which is the earliest one now available, fully staged, with all of its remarkable immersive staging and technical stagecraft, tour-de-force multiple role playing and its seamless thread of comic wit and momentum. I eagerly await some local professional entity to take up that gauntlet.

Alexander: If anyone ever does a guerilla revival of the Lillian Hellman auto-da-fé scene from Candide, I am already in line to buy a ticket. Til then, my recommendation is that audiences check out the Alliance production. It’s long-winded in the second act, a little too goofy, but ultimately slick, smart, visually inventive and a pleasure to listen to and look at. Do you have an ultimate up or down vote for potential ticket buyers?

Gresham: My response is mixed, but I have very strong, personal feelings for this work. I would urge interested audiences, [of] both music and theater, to go and make up their own minds based on empirical evidence, to which I think Voltaire himself would agree. This may not be the best of all possible productions, but still, like life itself, [is] an adventure worth taking.