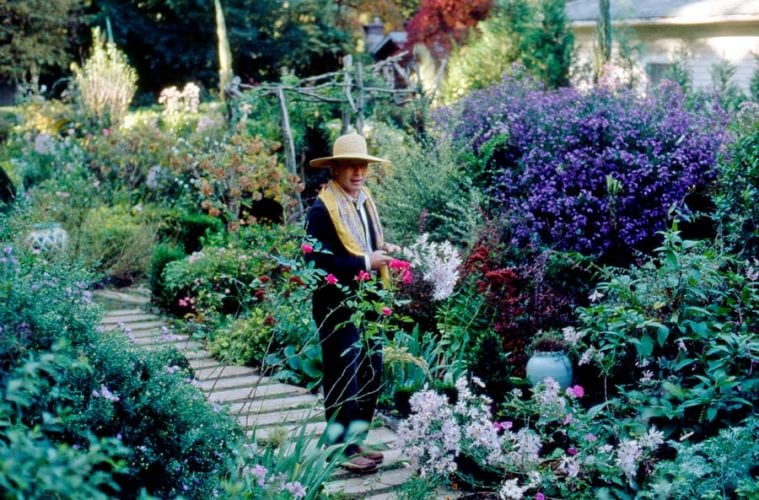 Ryan Gainey was many things to many people. He was the personal gardener to Atlanta media mogul Anne Cox Chambers. He was a successful entrepreneur whose signature store The Potted Plant spawned two spin-off ventures, The Connoisseurs Garden and The Cottage Garden. He was a horticulture expert who was often featured on nationally syndicated TV programs like Gardens of the World, hosted by Audrey Hepburn. But most Atlantans knew Gainey as an internationally renowned garden designer whose Decatur home was a showcase attraction in the Atlanta Botanical Garden’s annual “Gardens for Connoisseurs” tour.

Any social and cultural history of Atlanta covering the period between the early 1970s and July 2016, when Gainey died in a house fire with his beloved Jack Russell terriers, would not be complete without acknowledging Gainey’s influence and prominence in the community. The Well-Placed Weed: The Bountiful Life of Ryan Gainey, a new documentary by the filmmaking team of Steve Bransford and Cooper Sanchez, is named after one of Gainey’s most popular books and will have its Atlanta premiere at the Plaza Theatre on Thursday, May 17.

What started out as a film about Gainey and his talent for impromptu discourses on practically any subject, especially horticulture, began to eventually take shape as a much more intimate documentary portrait of the man, who once described himself as a “gardener, poet, raconteur, philosopher, mentor, verbite, visionary, designer and showman.”

The Well-Placed Weed clearly demonstrates that Gainey was all of these things as well as a self-taught genius who created this larger-than-life persona. That didn’t mean he was an easy interview subject or beloved in equal measure by everyone. He could be rude, dismissive, arrogant and ornery. But he could also be generous, kind, witty, fun-loving and a mentor to aspiring gardeners and landscapers who later became famous in their own right, like Alex Smith and Brooks Garcia. Gainey’s often contradictory nature is one of the fascinating aspects of The Well-Placed Weed. The film also offers revealing segments on his multifaceted interests (everything from hand-made costumes and headgear to Mark Twain poetry) as well as his working class upbringing in Middendorf, South Carolina.

Bransford, a senior video producer at Emory University and documentary filmmaker, and Sanchez, an artist and gardener at Historic Oakland Cemetery, filmed Gainey between 2010 and 2016, which, combined with editing and post-production, makes The Well-Placed Weed an eight-year labor of love. In a recent interview with the codirectors, we discussed some of the challenges and discoveries they experienced during the making of the film.

ArtsATL: Tell me how you both met Ryan and how the project developed.

Cooper Sanchez: I met Ryan first. I met him through Susan Bridges who runs Whitespace Gallery. She is a friend who represented my work at the time and introduced me to Ryan. I started working for him in his garden for about six to nine months. It was overwhelming. It was too much. I had to tell him I can’t be at your beck and call to come over . . . he’s a demanding guy. He was mad at me for a while, but a year later we became friends again. Not long after that, Steve and I became friends and Steve said he was thinking of a project he could film. I said you gotta meet this guy, so the first time we met with Ryan there were no cameras and nothing was being recorded. He was just himself. We then spent two years trying to get back to that person.

Steve Bransford: At first Ryan thought I was making a kind of master class in gardening. So we would come to his house and he would have a table set up with things to talk about – trees or tea olives or whatever – and deliver these 90-minute lectures that were brilliant, but we wanted to do something a little different. After a while he realized we were interested in his life, about growing up in South Carolina and his story in Atlanta. Even though we tried to steer things, we were a little at the mercy of what Ryan wanted to cover and what he wanted to divulge. It was “The Ryan Show.” What I found interesting was that he constructed this rural persona. He would say [things like], “I don’t own a computer but sometimes I get people to look stuff up for me” or “I’ve trained myself not to talk like someone from South Carolina but I kind of wish I did.”

ArtsATL: Many documentaries take a chronological approach to their subject, but you were able to avoid that.

Bransford: Cooper and I talked early on about do we need to go to Middendorf, South Carolina, where Ryan grew up? Is it important for us to visit there? We decided that we didn’t need to. The film is much more about his current orbit of friends. And he has an ambivalent relationship with South Carolina. He has an incredible nostalgia for it, mostly about growing up, but he’s also very proud of getting past it. ArtsATL: I like the fact that some of the interviewees are brutally honest about Gainey.

Bransford: Cooper and I wanted to avoid what we call a gush fest. All of the interviews were done while Ryan was alive. And I think the interviews would have been different after his passing. Some people might not have railed into him so much [laughs]. But I like it because of peoples’ honest opinion of him.

ArtsATL: I particularly liked the film’s evocative music score by Chuck Leavell and Benji Shanks as well as the selected songs. Were those songs personal favorites of Ryan?

Bransford: Ryan loved country, church and gospel music . . . and Tennessee Ernie Ford. I’d like to think that Ryan would approve of the opening song, “In a Land Where We Never Grow Old,” because it has a poignancy about the garden as a place for perpetuating memories of family members. They can live on and not grow old. I am also a big fan of roots music, and I wanted to get a gospel song in there. The final song, “I Shall Not Be Moved,” has that line about the tree [“Just like the tree that’s planted by the water, I shall not be moved”].

ArtsATL: There is a brief film clip of Ryan as a young man dancing in costume. Did you have access to other home movie footage?

Sanchez: We did not find any, and the “Sundance” footage was actually from a film he directed.

Bransford: But there were tons and tons of slides and photos, scrapbooks. He was really diligent about keeping up with his life and achievements, his press and his outfits.

ArtsATL: What happened to his possessions after his death?

Bransford: Some of it perished in the fire, but a good bit of it got moved after the tree fell [on the Decatur home]. Some of it was given away, like his amazing collection of Cherokee baskets that went to the Carlos Museum at Emory.

Sanchez: A lot of his books went to the Cherokee Garden library [at the Atlanta History Center].

ArtsATL: I thought it was miraculous that one whole wall of books managed to survive the Lexington house fire intact, as featured in your documentary.

Bransford: That was almost like a sign. That red book, Camellias, kind of popped out [at us], so that’s going to be our next project, a film about camellia culture. It will be about networks, about aficionados and propagators. It will be much more about a culture and not just one person. Hopefully we’ll do it a little quicker than we did this one. We loved working on this, but it’s exhausting to do a film on a single person. It’s also a big responsibility telling his story.

Sanchez: And emotionally draining when that subject dies. I miss him. We were really good friends.

ArtsATL: What is the current status of Gainey’s Decatur home?

Sanchez: The house was actually demolished recently. It was really in bad shape. The tree that fell on it shifted the foundation. And there were two types of beetle damage. It was a real tall order for Teresa [Gainey’s neighbor who inherited his home and property], so she’s going to build a new house with a similar footprint. And keep the gardens intact. But in some ways it will never be the same because Ryan’s not there.