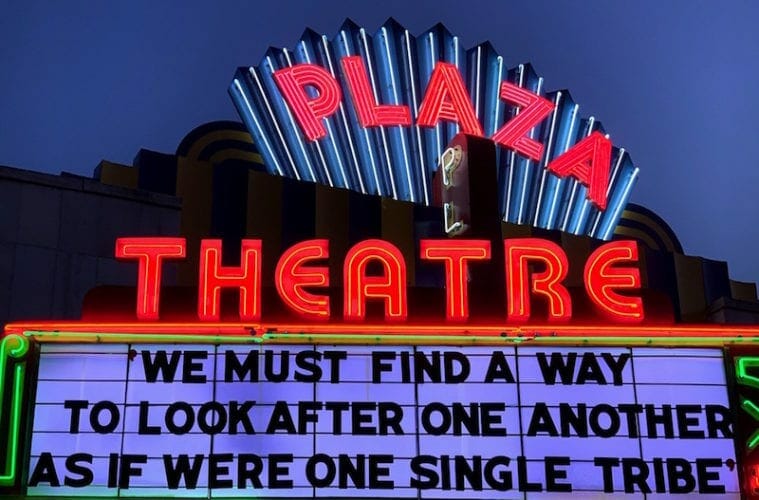 The Plaza marquee is continually updated during its Covid-19 closure with movie quotes. This one's from "Black Panther."

Atlanta’s Plaza Theatre might be the most famous movie house in the world these days, thanks in no small part to owner Chris Escobar’s vociferous opposition to Governor Brian Kemp’s decision to reopen theaters.

Escobar, who’s been interviewed locally and by NBC, CNN, The New York Times, Vanity Fair and other national media outlets, considers the easing of quarantine restrictions shortsighted, as do city and public health officials. Still, like many small-business owners, he finds himself weighing serious financial losses against the potentially disastrous cost of acting too hastily and endangering customers. 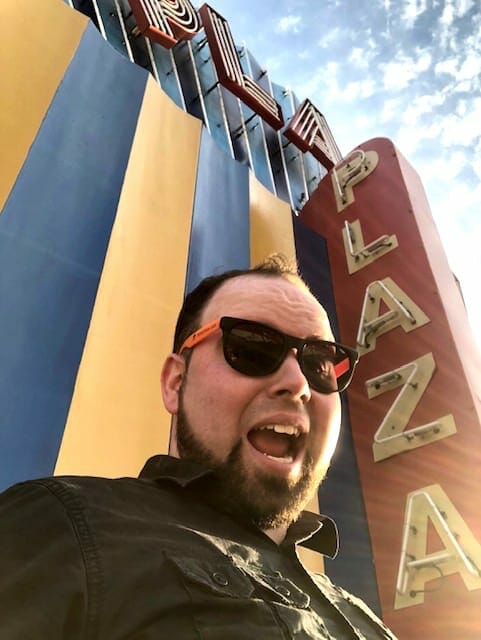 Until now, the eight-decade-old Plaza — owned by Chris Escobar — has never been closed for more than a week.

For now, he’s adamant that the Plaza won’t resume regular operations until there’s evidence that it’s 100 percent safe. “What happens if we open too soon and contribute to an outbreak?” he asked when interviewed by The New York Times. “Traced to the Plaza Theatre? You know what that would do to my business? I wouldn’t have one.”

The Plaza has survived World War II, numerous economic downturns and the 2017 “Snowpocalypse” in its 80-year history, and has never closed for more than a week. Until now. The theater has been shuttered since March 18.

And yet the art deco landmark in the city’s Poncey-Highland neighborhood has been busier than ever. Credit creative programming, plenty of ideas and support from longtime patrons, artists and film buffs who’ve rallied around their “temple,” as Escobar calls it, as in “When your religion is movies.”

The Plaza is offering a wide selection of movies online via virtual tickets. It’s been updating its iconic marquee with inspirational movie quotes, encouraging social media followers to “guess that film.” There’s a Quarantine Film Festival in progress, soliciting shorts of 20 minutes or less Monday–Wednesday and screening two winners on Facebook at 7 p.m. Friday. Look for a virtual tour of the theater at 7 p.m. May 7.

Also May 7, the Plaza will begin hosting private screenings in three-hour blocks for first responders and their families, an effort Escobar is coordinating with Grady Memorial Hospital.

And no later than next week, the Plaza will become the site of a contact-free “pop-up drive-in” in the building’s back parking lot. Escobar and his Plaza team will use a 20-foot-wide inflatable screen and admit no more than 49 cars to ensure social distancing (regular capacity: 79). They’re pursuing partnerships with such neighborhood eateries as Sweet Auburn Barbecue and Southern Belle so moviegoers can order food and support local restaurants while they watch.

“We’re going to stay away from anything too dark or too close to reality,” Escobar says of the film selections. “No one needs to escape to see Contagion.” 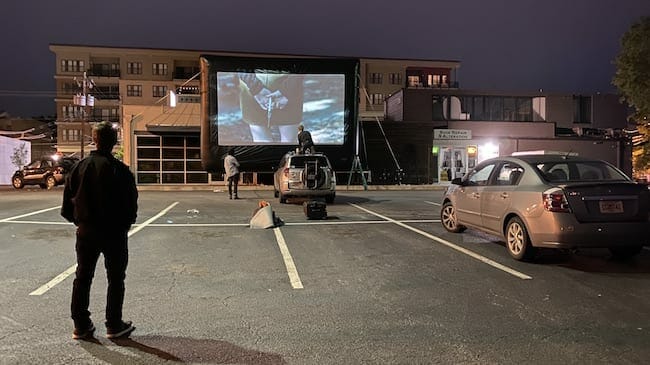 The pop-up drive-in should be open for business next week. The Plaza team has been testing it.

A Plaza poll on Survey Monkey is asking potential viewers to choose the first screenings. Among the 25 options are Beach Blanket Bingo (1965), Black Panther (2018), The Princess Bride (1987) and Rear Window (1954).

This renewed interest in drive-ins may seem like a bit of a time warp, but there’s another time warp associated with the Plaza. The Rocky Horror Quarantine Show is a Zoom-meeting edition of the midnight screenings that the Plaza has held for two decades.

The activity surrounding the Plaza since late March shows that there’s still an audience ready to participate and support the theater during the pandemic. Despite the upbeat response — and $30,000 raised through grants and a GoFundMe campaign — Escobar says that high rent and ongoing expenses remain a significant challenge.

He’s been able to keep paying his 10-or-so employees, assigning hours “wherever and whenever possible.” He’s also offered paid time off, which many employees have opted to use. 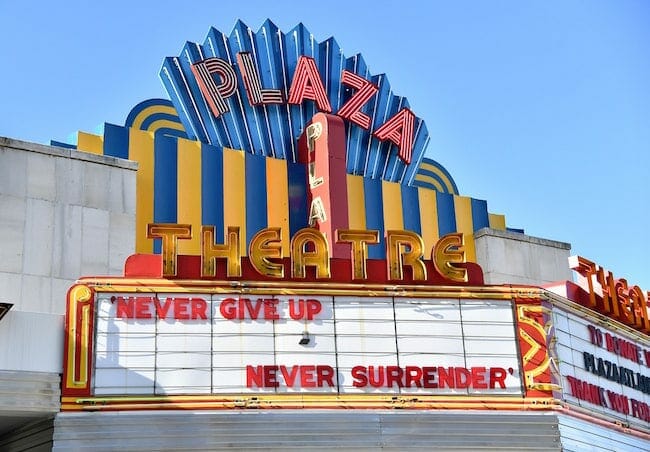 This inspirational quote on the Plaza marquee comes from the movie “Galaxy Quest.”

Keeping everything going in such uncertain times is like the “leap of faith” scene in Indiana Jones and the Last Crusade, Escobar says, the one in which Indy must step into a giant chasm and believe there’s a bridge.

“I’ve got to take that step out and expect people will see us, and that we will actually be able to open our doors eventually.” The community support and the donations, he says, are “inspiring and give me a great sense of responsibility.”

If there is a silver lining, it may be that “we’re getting streaming out of our systems,” Escobar says. This gives him hope about the niche his theater will fill once things leave the land of abnormal. “This time has illustrated the need for communal experiences,” he says. “Being able to enjoy something together is something that people have taken way for granted.”