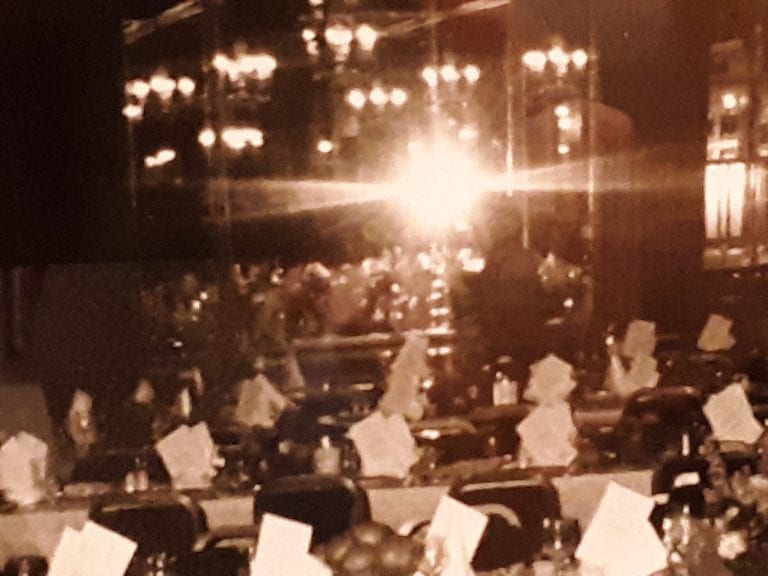 A detail from a circa 1980 photograph by Andy Warhol at the Carlos Museum (Installation view by Andrew Alexander, copyright the Andy Warhol Foundation for the Visual Arts, Inc., courtesy Carlos Museum)

As curator Andi McKenzie points out, the little detail above showing Andy Warhol’s camera flash momentarily reflected in a mirror is almost like an accidental self-portrait of the artist, depicted here as a sort of disembodied,  voyeuristic, glowing star. The photograph itself is part of a small but compelling new exhibition of Warhol’s work at Emory’s Carlos Museum entitled Chimera: Andy Warhol through the 1980s. The pieces, in their own hall-of-mirrors way, reveal some interesting and surprising aspects of the famously enigmatic artist.

The show — with its fitting title imagining Warhol as the ultimate composite creature — ranges widely, showing primarily works from the Carlos’ permanent collection, an almost bizarrely varied set of gifts from the Warhol Foundation.

Some characteristic examples of the famous screen prints are in the show: several from Warhol’s Cowboys and Indians series, a trippy sunset, a portrait of African royal Queen Ntfombi of Swaziland sparkling with diamond dust and a portrait of fellow artist Joseph Beuys, whom Warhol met briefly at an art opening in Germany in 1979. (When you visit, take note of the unusual and delicate rayon flocking that gives texture to Beuys’ hat). But there are also somewhat more uncharacteristic works such as the smattering of black-and-white photos and a pop-up artist’s book, and a set of Polaroids gives some insight into the thinking and process behind the larger pieces. Not to be missed is the November 3 screening of Andy Warhol’s films of the Velvet Underground curated by Film Love’s Andy Ditzler.

It’s a small show, but Warhol, with his abiding fascinations with death, sex, nature, wealth and beauty, can still take you by surprise, and he makes for an unexpectedly suitable match to the Carlos’ ancient artifacts. On that note, if you haven’t seen them yet, you have to visit the Divine Felines: Cats of Ancient Egypt before they depart the Carlos on November 11. Chimera: Andy Warhol through the 1980s remains on view through November 25.