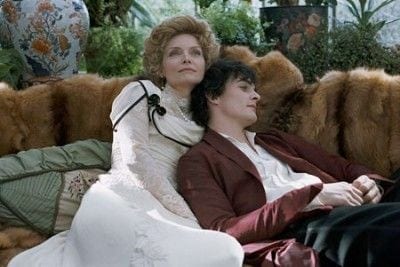 Collaborators 21 years ago on “Dangerous Liaisons,” Michelle Pfeiffer and director Stephen Frears return to France, and the past, for “Cheri,” another Gallic exploration about amorous obsession –- but one that never quite finds its focus or tone.

Based on two 1920s novels by Colette (also responsible for the sing-along horrors of “Gigi”), “Cheri” starts at the beginning of the end. Lea de Lonval (Pfeiffer) is a wealthy courtesan, age 49, aware that the bulk of her breadwinning days (er, nights) are stacking up behind her. So it’s without money in mind, but in service to that oh-so-French tradition of the sentimental education, that Lea accepts into her bed 19-year-old Fred Peloux (Rupert Friend), aka Cheri.

The son of fellow courtesan and once-rival Madame Peloux (Kathy Bates), Cheri is a boy Lea has known since he was a toddler. She even gave him his nickname. Now, he needs rescuing from a career of mindless debaucheries. And Lea is just the sort of professional sophisticate who can (with Madame Peloux’s tacit approval) train Cheri to become a real man in no time at all. However, that time stretches into six years. And at 25, Cheri still seems to be both lover and spoiled child, attracted like an infant to shiny things, such as Lea’s pearls.

An early scene of Cheri and Lea’s first kiss captures a fluttery sense of transgression, the transition of Lea from his mama’s pretty pal to lover. But there aren’t many subsequent moments that capture the relationship with complexity, or much plausibility. The movie tells us, more than shows us, about the depth of this May-December bond. So when the thick middle of the movie devotes itself to the lovers’ prolonged separation, we have to take it on faith that we should care whether they find their way back into each other’s arms. (Pfeiffer’s savvy Lea seems especially unlikely to be smitten by this vain puppy.)

“Cheri” makes a telling observation early: high-end working girls like Lea couldn’t cultivate friendships with “nice” women; they were forced instead to mingle with colleagues, even ones who were bitter former rivals. There’s a fascinating, lonely idea here, but it’s not played out. That’s partly because Kathy Bates — heaving through her scenes looking like an entire dress shop — plays Madame Peloux as a colorful busybody, even though the plot repeatedly has her attempting to wound and humiliate Lea. Her light, surface approach keeps the movie from exploring darker circles.

That’s also largely due to director Frears, who chokes the screen with Art Nouveau lushness. There’s not a scene here that lacks for a gush of flowers, shimmering fabrics, stained glass and picturesque villas. You’d think he was trying to make amends for the grittier, urban movies on his resume (“Dirty Pretty Things,” “My Beautiful Laundrette”).

Because of all this, the movie’s closing moments come as a surprise, as it suddenly aims for an unexpected depth and pathos. It seems that Cheri’s immaturity — what appeared, in Friend’s petulant performance, to be a great weakness in the film — is intentional, and at the heart of the story. But this revelation, how it’s handled, and the tonal shift that follows all come a little too late. You wish Frears had kept that final mood more clearly in mind from the start, and hadn’t drowned every real emotion in his overly scenic, petit-four approach.