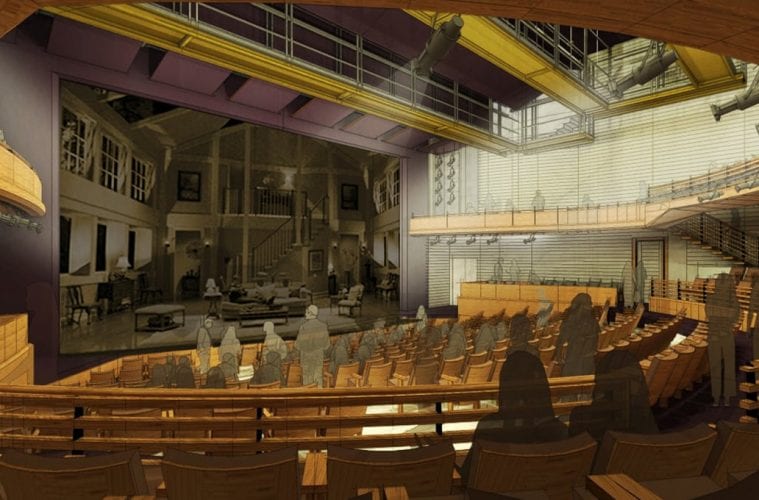 Changing of the Guard: For Susan Booth and the Alliance, a new theater space begins a new era

While the Alliance Theatre is not one of Atlanta’s core arts institutions under new leadership, with Susan Booth continuing to serve as the artistic director, the Alliance is still aflush with the new and about to see its theater space undergo a massive overhaul. Surprisingly, it will be the theater’s first.

A $22 million renovation will take place during the 2017-18 season and will be ready by the 2018-19 one, which is the 50th anniversary. During that gap, the Alliance will be performing at venues across the city. “We’ll be on our wild odyssey,” says Booth.

The new configuration will include technical enhancements, such as high-quality sound. Yet just as essential is the idea of bringing patrons together. “The relationship that we are all in this together will be made manifest,” says Booth. “Right now, the relationship between folks orchestra-level and folks balcony-level is like different zip codes. We started out with a premise that we wanted everyone who gives us the gift of walking into our theater to be given a dynamic relationship with the art form. This new room does that.” Booth’s test is the “gasp” test.  Her favorite moment is when “we’ll be standing in the current space and we show someone the design renderings of the new space. You’re not looking at a coat of paint; it’s a radically transformed environment.”

The venues used in the interim will be picked largely according to the shows. “It’s a cool mixture of art and science.” she says. “We took maps and did an overlay and asked, where is our current audience, and how do they distribute around the Atlanta region? Then we put an overlay in on where is their cultural activity that we think would indicate an interest in what we do, where we are not represented.”

Yet Booth is also interested in working with community partners, organizations that have theater-able venues, or venues that could be made into theatrical spaces. The company is getting close to nailing down the 12 venues. In some cases, it’s a matter of just being a logical fit. “If there is a piece that we are madly in love with and it’s set in a jazz club — wouldn’t it be cool if we produced it in a jazz club?” she says.

Booth’s longterm vision for the Alliance is having patrons willing to come to the theater not just to be entertained but to give them something to think about. She is encouraged by the response to Disgraced, the Alliance’s much-discussed play from earlier in the season.

“I am so informed by and delighted by how much of Atlanta showed up to have the conversation with this,” she says, “We have developed a loyal, strong and sustaining audience that supports us as we create these shiny new musicals, and that is fantastic, but we are also slowly and steadily growing this audience that wants the provocation of big chewy ideas and looks at that as an entertaining venture.”

The new theater space will help Booth fulfill what she sees as the Alliance’s role in community. “The vision I have is that we wouldn’t think of instruction and entertainment and delight as distinct ideas — and discreet ideas,” she says. “We would be building an audience that would walk through doors of the theater hoping and hungry for their hearts and heads to be deeply engaged: ‘Delight me, show me beauty, but get my mind revved up.’ And that isn’t a crazy-ass, pie-in-the-sky idea, because I am watching these full houses come out night after night. That tells me the appetite is there.” Disgraced was a thought-provoking hit for the Alliance this season. (Photo by Greg Mooney)

One big evolution she has seen over the year is diversity. Booth realizes that when that word is used in Atlanta, it’s often understood to be code of the binary of black and white. Yet to her, it’s beyond that. “I am using it in terms of age difference, economic difference, political difference, religious difference,” she says. “The diversity in our audience is concurrent as opposed to sequential.”

The cultivation of new and different audience demographics is a key to the theater’s future. “We are continuing to program diverse work and cultivate a concurrently diverse audience, so that the college kid from that zip code, with that cultural background, is sitting in the audience the same night next to the senior citizen from that zip code with that cultural background,” Booth says. “That knocks me out, and I owe a lot to my predecessor (Kenny Leon) for the evolution of that happening. ”

Booth is highly encouraged by seeing not only her venue get a facelift but new blood leading other institutions. “There are folks arriving in town who are seeing so many of our theater companies, our visual artists, our dance community, so much innovation and forward motion and support,” she says. “So that is their perception of Atlanta’s cultural reality, and they will operate accordingly.”