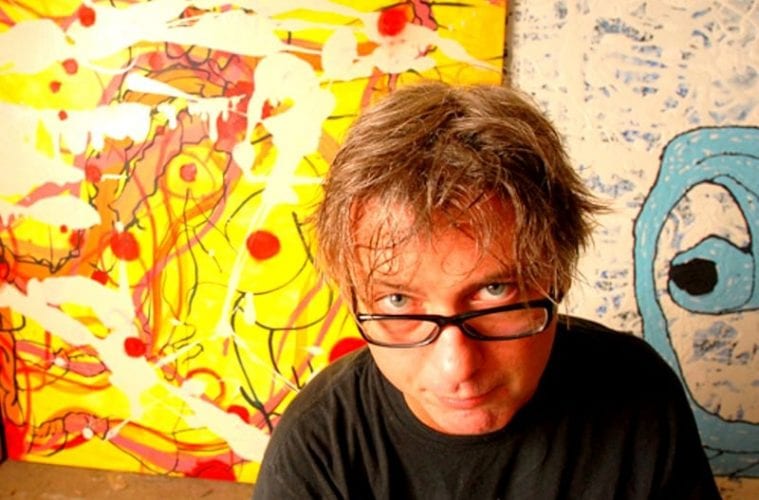 Editor’s note: Hall serves as vice chair of Eyedrum Art and Music Gallery; his duration in that post overlapped Woody Cornwell’s time on the Eyedrum board. This article was solicited by ArtsATL from Hall separately from his affiliation with Eyedrum, and does not reflect the views, thoughts or opinions of Eyedrum the organization.

“He had a passion for art and life,” said friend and performing artist Deidra Lynn Currie about Woody Cornwell, who was known in Atlanta as an artist, educator and co-founder of the nonprofitEyedrum Art and Music Gallery. Currie added, “The guy was always on fire. He was always making art out of everything.”

Cornwell, 48, of Savannah, was found dead at his home on April 10, the official date of death declared by the Chatham County coroner’s office. Friends had grown concerned over an uncharacteristic and days-long lack of communication from him. His brother, Mark Cornwell, said Cornwell died of natural causes. He also confirmed that Cornwell was being treated for a staph infection.

John Woody Cornwell Jr. was the elder son of John Woody Cornwell Sr. and Elaine Minick Cornwell, who raised their sons predominantly in Macon, Georgia, and Anderson, South Carolina. The family later relocated to Dalton, Georgia, where the brothers attended Dalton High School. A high-school yearbook photograph posted on a Facebook appreciation page identifies Cornwell and a young woman, named in a caption as Anne Marie Rains, as “Most Artistic.”

Al Greene, an artist and one of Cornwell’s former classmates, said, “About 1983, ’84, we were hanging out . . . We were in different grades [at Dalton], but we became friends.” Later, the two were roommates in Savannah, starting in 1988. “He had transferred from UGA [University of Georgia], and I came from [Georgia] Tech. . . we were both undergrad there [at Savannah College of Art and Design] for about three years. He worked at the City Club . . . as a valet and a bartender.” Greene said Cornwell also managed the SCAD art supply and framing store. “I came to Atlanta in [1993] or ’94,” Greene said, “so he probably came about ’95. He came up specifically to [attend Georgia State University]. That’s where he got his master’s. I believe it was [focused on] straight-up painting.”

Of Cornwell’s work toward that degree, artist Pam Longobardi, who acted as his thesis advisor, wrote, on the Facebook appreciation page on April 13: “His MFA thesis paper was so good someone accused him of plagiarizing it because they couldn’t keep up with Woody’s abstract mind.” She later added, “Woody was an uncompromising explorer of abstraction, he was a fierce and fearless inventor of new painted territory. He created new spaces for creativity to thrive in the starting and evolution of Eyedrum that were a parallel to the complex, sometimes messy yet wildly original worlds of his paintings. He was a total artist.”

By the mid-1990s, the eight people who would found Eyedrum — among them, Cornwell and his roommate Marshall Avett, Bill Spence and Rachel Pomberg — were, as Pomberg said, “growing frustrated with the lack of venues for alternative art; we were looking for something more fluid and experimental . . . outside of the existing structure.”

Their answer was the one-two punch of Silver Ceiling, followed by Eyedrum, established in the row of lofts on the north side of Trinity Avenue, between Spring and Forsyth streets (and, coincidentally, only blocks away from Eyedrum’s current Forsyth Street location).

“Silver Ceiling,” Pomberg said, “was a raw, big loft space [where Cornwell and Avett lived] with tinfoil on the ceiling.” Eyedrum, inaugurated later, “was [at] street level; Silver Ceiling was upstairs,” Pomberg noted. She remarked on Cornwell’s “unending energy and commitment; he was always there.” And so, too, were musical concerts, visual arts exhibitions, performance artworks and at least one fashion show.

As programming increased, Cornwell helped recruit volunteers from the ranks of recurring visitors. “I just started by cleaning up the place,” said writer/editor Unisa Asokan. Later, she said, Cornwell “asked me and Randy [Castello] to start booking [music] shows. Woody said, ‘I want bands like Some Soviet Station.’ I think one of [the band’s members] lived . . . in the building somewhere. That was the start of Tight Bros Network.”

Asokan speculated that, at the time, “Woody wanted to be exposed to more music.” Unquestionably, certain performers became associated with Cornwell’s creative process, especially jazz maestro Miles Davis. Former Eyedrum board member Susan Cipcic, who pursued her MFA alongside Cornwell, posted on the Facebook appreciation page that “I can no longer separate [Davis’ 1970 recording] Bitches Brew from WC and his paintings.”

Cornwell’s interests encompassed numerous mediums, including, notoriously, the culinary arts. Former Eyedrum board members Deisha Millar and Rachel Pomberg talked about Cornwell’s grilled cheese sandwiches (albeit with opposing reactions), for which he replaced bread with glazed doughnuts — a specific brand, and long before such an idea materialized in any burger boutique. It’s worth noting that the Facebook appreciation page is called “The Woody Cornwell Krispy Kreme Dream fund.”

Stan Woodard, who served as Eyedrum’s community relations liaison from 1999 until 2003, said of Cornwell, “We got into a fight once. I told him he was an abstract expressionist, and he challenged me to define what an abstract expressionist was. Because he had internal rhythm and symmetry . . . were [among the] reasons he doubted he was one.” Woodard said there was no arguing about Cornwell’s supportiveness in the other direction, though. “He was always encouraging [of my art], even [the ongoing performance installation] Stan Woodard for President, the Opera. But even if he liked [a work], he challenged the artist. He believed in art more than anyone else I’ve ever known.”

That desire to challenge others sometimes affected people outside the arts. Greene said, “Woody was always kind of inappropriate. One July 4th we were all on the beach and Woody had brought an American flag as his towel.”

By 2009, a year into the Great Recession, Cornwell faced some financial hardship. In a Creative Loafing profile from the time, he stated that “People in my family ask me if I’m really making a living as a painter.” His answer: “No . . . I’ve had three or four jobs for a long time.” Among the things he did to make ends meet were ad sales for Atlanta-based Art Papers magazine and, later, after he moved back to Savannah, helping out a friend who offers boat tours there. He held various teaching positions over time: at Atlanta College of Art, until its acquisition by SCAD; at Callanwolde Fine Arts Center; and, perhaps most recently, at Savannah’s Telfair Museum.

Andy Imm, an Eyedrum board member and a former studio mate of Cornwell’s, said, “[Woody] had this crazy flow about him. He could plan abstractions and be automatic with it.” After four or five years of sharing creative space, Cornwell “got a really good deal on space in Hapeville,” Imm said.

Savannah-based artist Becca Cook, a friend and a former girlfriend of Cornwell’s, said the two of them had also taught a few workshops at galleries in Savannah. “We had a collaborative show in October [2015, in the gallery] at Sulfur Studios.” During this more recent stay in Savannah, Cornwell was using his apartment as a studio, she said.

Over the course of his career as an artist, Cornwell took part, as a contributor and/or as curator, in countless exhibitions at art spaces including Sandler Hudson Gallery, the Swan Coach House Gallery and Museum of Contemporary Art Jacksonville. He also served as a juror for the Forward Arts Foundation’s Emerging Artist Award and as a member of Art Papers magazine’s board of directors.

Priscilla Smith, who serves as current executive director of Eyedrum, wrote about Cornwell in an email: “Twice in the years since we lost [Eyedrum’s space at] 290 [Martin Luther King Jr. Drive] I remember his coming to Eyedrum, once at C4. I think I embarrassed him by being too glad to see him, too demonstrative (it really meant a lot to see him at Eyedrum). Another time he appeared at an opening at 88 Forsyth Street. I think I was less demonstrative but just as intense and appreciative in meeting his gaze to let him know how significant his presence was. He disappeared quickly. I’m heartbroken that I never knew him. I feel utterly cheated. When I’m doing the ‘tell the story of Eyedrum’ thing, I always say his name.”

Publisher and gallerist Robert Cheatham, who served as Eyedrum’s first executive director, said, “If it hadn’t been for Woody, I don’t know what would have happened to me.” At a time when Cheatham was suffering from a deep depression, a friend invited him on an outing to Silver Ceiling. Today, Cheatham insists, “Whatever avant-garde scene there is [in Atlanta] is because of Woody.”

Cornwell is survived by his parents and his brother; a nephew, Harry; and numerous cousins on the Minick and Cornwell sides of his family. On Facebook, Mark Cornwell announced a memorial ceremony/exhibition for his brother in Newberry, South Carolina, where Cornwell was born and where their parents now reside. At press time, the event was scheduled for 2:30 p.m. Saturday, April 30, at 1200 Main Street and 1208 Main Street in Newberry. Specifically, Mark Cornwell stated in a post on the Facebook appreciation page that, “One of the rooms is a little dank. So most of the art will be there (1208). Woody would’ve wanted the dank.”

(Editor’s note: Two paragraphs in an earlier version of this story were deleted.)