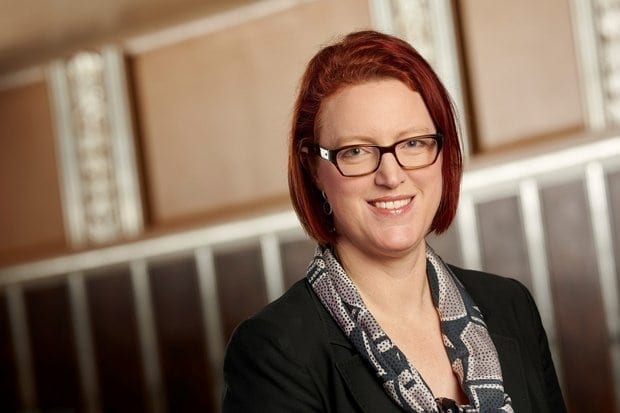 The Atlanta Symphony Orchestra is coming off its strongest financial year in more than a decade, and new executive director Jennifer Barlament was hired to build on that momentum. Barlament, 42 and an Emory University grad, began work in January. Before taking over the helm of the ASO, she was general manager of the renowned Cleveland Orchestra, considered one of the “Big Five” in the United States.

It seems apropos that Barlament is also a musician, and her hiring was embraced by the ASO’s musicians, who chafed under the rule of former president and CEO Stanley Romanstein. There were lockouts that delayed the seasons in 2012 and 2014, fueled by 11 years of deficits. In July, the Woodruff Arts Center — the ASO’s parent organization — announced the orchestra had closed its season with a six-figure surplus. In addition, Woodruff kicked off a fundraising effort that has raised more than half of its $25 million goal to pay for 11 musician positions that were cut during the 2012 lockout.

Barlament was new on the job earlier this year when she sat down with ArtsATL to discuss her hopes for the Atlanta Symphony Orchestra, what she likes about Atlanta and to offer her favorite Duke Ellington quote.

ArtsATL: The Atlanta Symphony Orchestra has gone through tumultuous times over the past five years. Where do you think things now stand?

Jennifer Barlament: I’m really fortunate to have come into this organization at this time. Interim president Terry Neal did a fantastic job of getting the shop moving in the right direction and creating this great wave of momentum, which I am delighted to be riding.

ArtsATL: Given the recent rocky period at the ASO, what is the morale like among the staff and musicians today?

Barlament: I sense a wave of optimism both among the staff and the musicians. Everybody has been through a really tough time, but, from everything I’m hearing — from donors, musicians and staff, as well as the buzz within the industry as a whole — the feeling is better than it’s been in a very long time.

ArtsATL: In terms of financial performance, where do things stand today?

Barlament: As reported, we had a surplus last year. Funding the musician’s endowment is way ahead of schedule. We’ve seen strong ticket sales. People are feeling very optimistic.

ArtsATL: What is your early impression of working with the Woodruff Arts Center board?

Barlament: I think everyone on the board is feeling both optimistic and realistic. The one thing I noticed throughout the search process and during the short time I’ve been on the job is that this board is very engaged and committed to the success of the institution. I think part of this [engagement] is due to the fact that the last few years have been a real wake-up call which has re-dedicated everyone to continuing excellent music-making, as well as creating an artistically vibrant and financially solid institution.

ArtsATL: What particular qualities do you bring to the position of executive director?

Barlament: I came into this [position] as a musician. I’m here because I love music, I love orchestral music. I love musicians and working with them. And I love the results. I love what music does for the community.

Another one of my passions is access. I truly believe it’s our opportunity, responsibility and obligation to make this great art form available to everyone in the community, regardless of who they are or where they come from or whether they have any familiarity with classical music or have any money — everyone deserves a chance to experience this beautiful music.

ArtsATL: Have you had time to identify specific areas in which access is manifest at the ASO, which might become points of focus for expansion or modification?

Barlament: One of the things I’m excited about energizing here is the education program. We already have a wonderful suite of education programs, but [one of my goals is to] pull them together and make them more effective, including taking advantage of all the great resources at the Woodruff Arts Center, especially for young people. As an example, we’re in the same building as a theater company and an art museum; to me, you put music, theater and art together and make something extra special. So I’m eager to discover what the synergies there are…

ArtsATL: What particular stylistic qualities do you bring to the role of leader of the ASO?

Barlament: What this institution needs right now is good, strong, passionate leadership, and someone who can work collaboratively with the musicians, the staff and the board. Collaboration, respect and passion for the art form are my three core values as a leader.

ArtsATL: What types of music do you enjoy listening to?

Barlament: To paraphrase Duke Ellington, “There are two kinds of music: good and bad.” All kidding aside, I love chamber music, I like its intimacy and being able to hear the individual voices. Strangely enough, I also really enjoy Renaissance vocal music.

ArtsATL: Looking ahead to the 2016-17 season, what programs or events are you especially focused on?

Barlament: What jumps out to me overall about the season is the focus on the chorus and the legacy of Robert Shaw. The Atlanta Symphony Chorus, in many people’s opinion, is the finest orchestral chorus in the world. I heard them play the Verdi “Requiem” in November, which was just stunning. The same piece, incidentally, was performed at one of the last concerts I ever attended when I was in my last year at Emory University.

ArtsATL: Although you weren’t here for most of the 2015-16 season, what impressions have you gathered from the programming and box office performance?

Barlament: We finished up one of our busiest Decembers in recent memory. In total, the ASO played double the usual number of concerts for us, which includes educational concerts and concerts in the region, such as Kennesaw and Athens. Tickets sales were double-digit percentage increase over out last benchmark year, which was 2013. For our holiday programs, 37 percent of the people were attending their first ASO performance, which is amazing.

ArtsATL: What are your thoughts about the 2016-17 season?

Barlament: We have a couple of themes running through the 2016-17 season. One of them is “The Elements,” which is focused on the elements of earth, wind, fire and water. We also have a Modern Masters series. We’ll be doing more in the Pops series, which has proven to be very popular. We anticipate being able to announce a schedule of Piedmont Park performances along with additional Verizon Wireless Amphitheatre dates soon. On the fundraising side — going back to a cherished tradition — we will have a Symphony Ball in September.