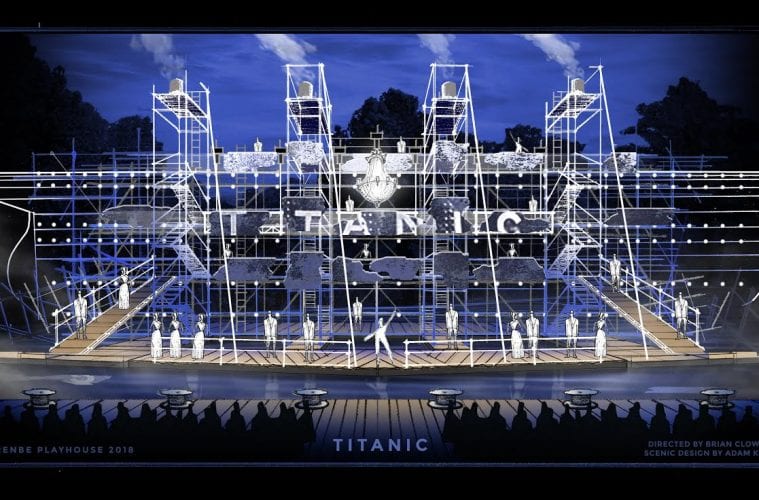 Brian Clowdus and Serenbe Playhouse raise the stakes with epic “Titanic: The Musical”

When Brian Clowdus sits down to offer a preview of Titanic: The Musical at Serenbe Playhouse (July 11–August 12), his body language mirrors the action measure for measure. Demonstrative by nature, his eyes widen and narrow at turns. The pitch and volume of his voice fluctuate to either heighten the drama or drive home the pain. He will lean in and rear back in his seat for emphasis. His voice breaks on occasion. And he speaks not only with his hands — but with his arms. His shoulders. His entire being.

A funny thing happens, though, when running his actors through their paces an hour later — where an inverse energy applies.

As soprano Lilliangina Quinones, who plays Rosalie Ida Straus, and tenor Robert Wayne, who plays her husband, Isidor Straus, rehearse the song “Still” — at which point the couple must confront their mortality as the ship sinks and water rises — Clowdus is emotionally on board with them. He is utterly captivated and does not move a muscle until the song ends. Only then does he take a deep breath before offering an insight. 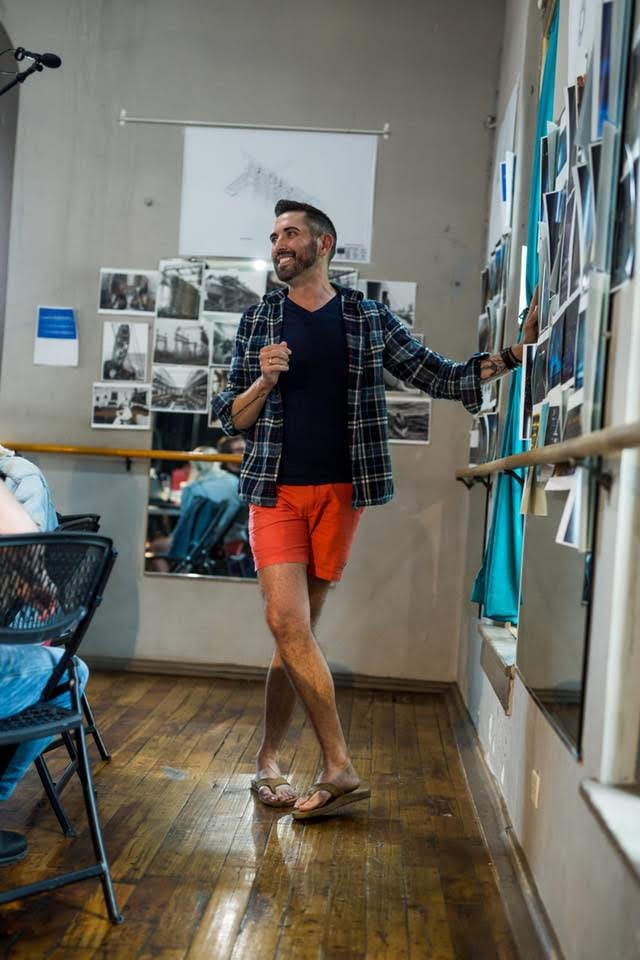 “I’ve got to see the nostalgia, the terror, and the acceptance from both of you,” he says in an even tone, trusting the weight of his words will sink in. “In that final moment, you give in and embrace because, holy shit, you’re waist-deep in water. You started this relationship together and you’re ending it together. But you’ll finish your life looking at each other, smiling at each other, and thinking, ‘You’re the last thing I want to see when I die.’”

As if on cue, a production assistant enters the studio. Clowdus doesn’t so much see as feel her presence. Turning to her, he asks, “May I touch you?” As she nods her consent, Clowdus becomes Isidor Straus — looking into her eyes, folding her into a tight embrace and demonstrating every emotion he’s just described to his actors . . . without uttering a single word. It is pure alchemy. And just as fast, the moment is over as he snaps back into director mode.

Clowdus’s ambidexterity as an actor, director, founder and executive artistic director of the Playhouse have made his name synonymous with magic, whimsy and escape to local audiences for nine years. And his relentlessness in pursuit of the suspension of disbelief — from landing a Vietnam-era helicopter nightly during the run of Miss Saigon two years ago, to reimagining an outdoor Kit Kat Klub in last summer’s hit Cabaret — have cemented the company’s national reputation as a forerunner in immersive theater.

“I would be lying if I said there wasn’t a part of me that always wants to exceed expectations at the Playhouse,” he says. “But as a director, my choices come from wanting to create environments for my actors that will evoke a response and inspire really specific, bold choices on their parts. I want to challenge myself and surprise my audience. And it always goes back to storytelling. A lot of people came to see Miss Saigon for the helicopter, but left thinking about the story. That’s what I want for Titanic. It’s not about the boat sinking. It’s about people on a voyage or quest for joy, hope and change.”

That said, given the ensemble cast of 40 actors, Victorian-era costumes and over-the-top set design — the cost of which added $100K to the production budget — it’s a safe bet that thrill-seekers will not be disappointed.

Nothing prepared Clowdus for seeing the five-story-high, 100-foot-long ship afloat in the middle of a lake at Serenbe. In fact, it brought him to tears even though it was the realization of his own dream. “The first time I saw the Titanic set, I just lost it,” he says. “I was not aware of anything except being in that moment and seeing that ship. Everything else just floated away. It’s the closest I could relate to having a religious or out-of-body experience.”

It took a village, and the generous support of the Home Depot Foundation, to build and sink Clowdus’s dream boat — starting with a scenic designer (Adam Koch, who’d collaborated on Miss Saigon, Carousel and Cabaret); a structural engineer (who had to sign off on the set rendering with an eye on safety, weight-bearing logistics and moving parts); a licensed construction company (which leased and installed all major scaffolding pieces and motorized parts for the production); the city of Chattahoochee Hills (which has overseen the entire process to ensure compliance); the Actors’ Equity Association (looking out for the welfare of every union actor in the show); and a stuntman (who determined where and when actors could hurl themselves overboard). There is even a competitive diver in the cast, which came as a happy surprise to Clowdus after he’d hired her, who will fling herself from the top deck of the ship at a key plot point. 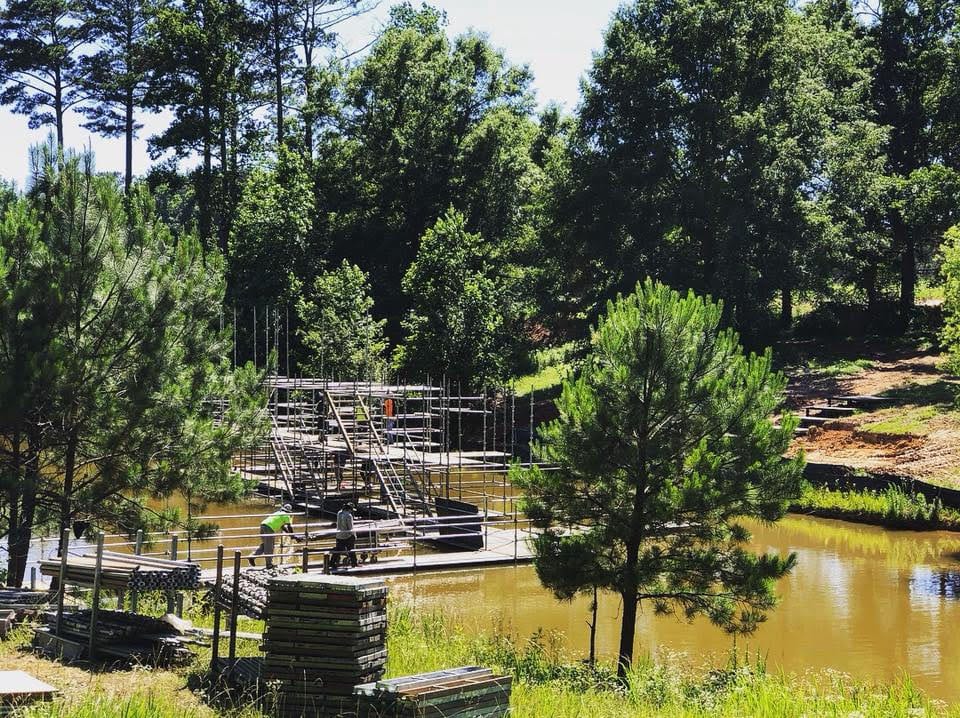 The epic Titanic set under construction

“Everyone’s getting drenched,” says Clowdus, “costumes and all.” But he turns serious when pointing out that only two female passengers in first class perished on the Titanic, as opposed to the hundreds traveling in third class or steerage who drowned. “When I produce theater, I don’t talk about politics. I let the material do all of the talking. But when you see this show, you’re going to be hit in the face with the ramification of wealth and class. That’s how conversation gets started. It doesn’t start with a director putting a big note in the front of his playbill. It starts from what audiences see and experience.”

To keep the experience intimate, audience capacity will be limited to 400 guests per performance. All seating will be built into the banks of the lake to preserve parallel sight-lines with the action, as opposed to a bird’s-eye perspective that would result from stadium-style seating. And as with every production, the operative words for Clowdus will be sincerity and fun.

“I am constantly telling actors two things,” he says. “First, ‘You’re here because you’re a good singer, but I don’t care what you sound like. If you cry or breakdown during a song, that is okay. Let the note suffer because it’ll be coming straight from your heart.’ The other thing I’ve been saying since our first production is, ‘Y’all, we’re just doin’ skits in the woods. You can’t be too precious about it. You’ve got to find the joy and the insanity of sinking a ship in a lake while telling really evocative stories. But at the end of the day, we gotta have fun.’”