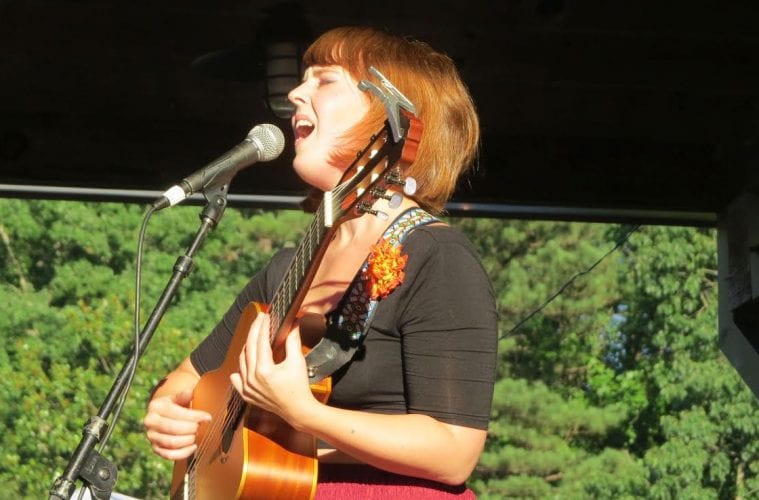 Summer is prime time for outdoor concerts, celebrating sun and song in the bright and balmy weather, when good fortune offers no threat of thunderstorms to dampen the occasion, that is. This past Sunday weather was beneficent when one of metro Atlanta’s northside suburban destinations, the Chattahoochee Nature Center in Roswell, hosted Atlanta-raised singer-songwriter Adron and her band in a full evening’s concert, part of the center’s “Sundays on the River” series. The temps were hot, as expected, but otherwise ideal, cooling off comfortably as the sun dropped behind trees and deep twilight fell by the show’s end.

It was Adron’s first time performing at the center’s Ben Brady Lakeside Pavilion, which seemed a natural fit for the rufous-crested warbler — an especially apt venue given how her attractively limpid singing style is in part inspired by birds. Somewhat shy and soft-spoken offstage, when performing onstage, her facial expressions range from a Mona Lisa smile to a sunny big grin, and she charms listeners with her presence as much as her music-making.

Just last month, Adron landed an exclusive premiere on Billboard.com for her song “Your Habitat,” inspired by her love for Brazilian Tropicália and old-school R&B, and the lead single from her forthcoming Water Music album, to be released in mid-August. Its theme is one of a shared personal space, one that hearkens somewhat back to an early Adron original, “Blanket Fort,” but is a product of the more seasoned songwriter that Adron has become.

Influenced by American songwriters of a couple of generations before her, like Harry Nilsson and Margo Guryan, Adron’s is a sophisticated songwriting that doesn’t conform to square stock form, but allows for subtle surprises and fresh harmonic turns. Her originality is not a matter of novelty as it is a personal voice assembled from diverse, but identifiable, eclectic inspiration. Influences from Brazilian guitar traditions come across clearly in her peppy acoustic guitar playing. When her carefully crafted songs take on a moderate rock drive, they are not overdone, but take their energy from the music’s momentum rather than force or volume. Rich harmonies underscore fluid, flexible, melismatic melodies – sometimes even whistled, a particular skill that Adron employs often.

For Sunday’s summery outdoor program, Adron played songs from across her songwriting catalog, from newer original songs like the cheerful ballad “Home in a Human Form” to the familiar “Pyramids” that appears on her previous album Organismo (2011) and has been heard as the alternate weekend theme music for Sunday evening broadcasts of WABE-FM’s “City Lights” with Lois Reitzes.

Among other songs performed, “Infinite and Tenderlovin’” expressed Adron’s genuine love for Atlanta, written after returning home from a stay in New York, a love that remains indelible even as she now is preparing to leave again and take up residence in Los Angeles. She also played the smoothly upbeat but haunting pop song “A Ghost in My House.” Other song topics included apocalyptic musings (“Sun Behind The Sun”) and, of all things, the downsides of being a musician.

Nevertheless, the primary themes behind her lyrics tend to dwell on the vicissitudes of young love, the fickle girl-and-boy emotional intimacies and uncertainties that have long fueled pop songs across generations, even the cheesiest of evergreens. Among these, “When I Leave You” ruminates over morbid dreams of what a boyfriend’s parents might say about her after they broke up, despite a jaunty guitar part. Another, “I Love You The Most,” she described to the audience as “my new favorite song by me.” On one cover song, couples were slow dancing on the concrete walk. Her final song of the second set, “Low Key,” tells of another boy she fell in love with and bravely declared it to him, though he already had a girlfriend.

Then Adron capped the evening with a solo encore cover, of which she said, “I didn’t write it but wish I had”: an arrangement of “Ave Maria” in which Schubert meets bossa nova, with a long guitar intro and elaborated melody, including copious whistling.

The show ended just as the sky got dark, and people began finding their way back up the hill to their cars. The “Sundays on the River” series is an after-hours expansion of Chattahoochee Nature Center’s adult programming, which enhances awareness of the center and their mission of connecting people with nature through a variety of educational programs for children, families and adults. Two more shows in this year’s concert series remain, August 12 and September 9.

Adron’s next Atlanta appearance, in the wake of her Water Music album release, will take place August 23 at Terminal West.