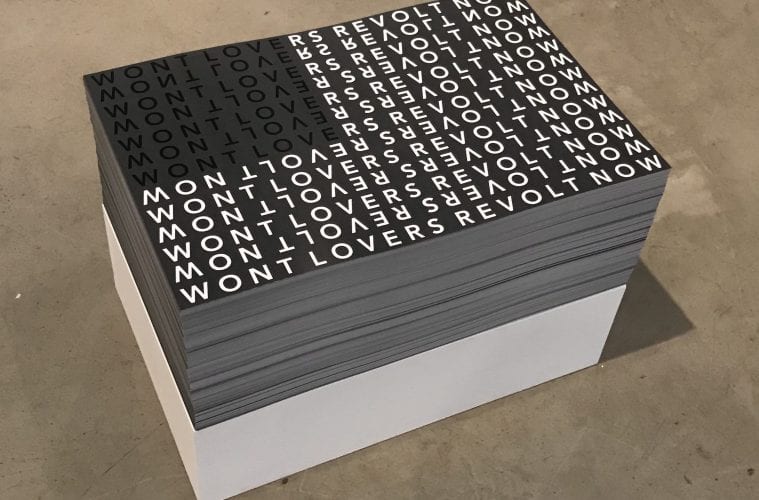 The tense days leading up to the opening of Won’t Lovers Revolt Now at Whitespace on June 22 seemed to amplify the urgency of the question in the group exhibition’s title. Curated by The Fuel and Lumber Company, the Birmingham-based curatorial project of artist couple Amy Pleasant and Pete Schulte, the show would have still offered potent critiques of nationalism and closed borders even if its opening hadn’t followed on the heels of two weeks of disturbing headlines describing migrant children being forcibly separated from their parents at the US-Mexico border.

The poster from which the exhibition borrows its name spells out the title in mirrored rows of text resembling a black-and-white American flag. Created by Las Hermanas Iglesias, a collaboration between sisters and artists Lisa and Janelle Iglesias, the posters are available for viewers to take with them from the gallery, a gesture that echoes but also questions the participatory elements of democracy. Ben Estes, Heart Poem (Because of the Battle) (All images courtesy the artists/Fuel and Lumber/Whitespace)

Graphically arranged text also guides the composition of the paintings on view from New York-based artist Ben Estes’s Heart Poems series. Marrying his practices as a painter and poet, Estes uses acrylic and pencil on large sheets of paper to trace overlapping and alternating geometric patterns reminiscent of quilts, which are overlaid by brief lines of text. Refracted from its digital presence as an emoji, the simple shape of a heart visually unites the Heart Poem paintings, appearing in various configurations in each work. Like the takeaway poster designed by Las Hermanas Iglesias, Estes’s paintings feel like they could double as protest signs or banners, but their language is sparse and poetic, not polemical. Sharing the pensive, indirect tone of Zen kōans, these texts encourage a contemplative state distanced from the demands of individual ego or defensiveness. In Heart Poem (Lighthouse), above four hearts that each decrease in size like nesting dolls, blue text reads, “Lighthouse caught mid-turn / remembers again how to do it, again.” At the center of another Heart Poem painting, subtitled Full Ripe Orange, the phrase “LEARNING TO WANT LESS” is spelled out in capital letters across a gridded heart. While they clearly visually echo Duchamp’s Fluttering Hearts, the colorful variety and consoling aphorisms in Estes’s Heart Poems also bring to mind the 1960s screenprints of American nun and pop artist Sister Corita Kent.

The Dadaist literary sensibility conveyed by Estes’s Heart Poems is shared by the works on view by Rubens Ghenov, a Brazilian-born painter who now teaches at the University of Tennessee, Knoxville. For a previous gallery show in New York, Ghenov created paintings referencing the life of a fictional Latin American poet of his own invention. It’s not clear if the paintings in Won’t Lovers Revolt Now belong to this body of work, but their arch titles and sly references to the genres of still life and interiors imbue the paintings with the surreal, circuitous sensations of a short story by Borges or Clarice Lispector. In the large painting The Occasion of an Afternoon Shelf. Half Syllable, the uncannily overlapping surfaces of constructivist-style shapes create impressions of opening doors and extending hallways. In the painting’s lower left corner, an angular face rendered in profile is flattened into this architectural configuration, almost offering a protagonist for the barely present narrative. The painting’s unique color palette makes its smaller siblings in the adjoining gallery more recognizable: Ghenov’s choice of grayish linen over canvas gives his works a chic modernist solemnity, which is playfully undercut by the hard-lined borders and shapes he inserts in blue, red and purple jewel tones. Text also sometimes appears in Ghenov’s paintings but is usually cut or mirrored so that it’s message is indecipherable. The artist has spoken before about how his experiences as a bilingual immigrant have influenced the mysterious, opaque atmosphere of his paintings. Dana Haugaard, Pull up if I pull up

Though it appears in the separate space known as whitespec, Atlanta artist Dana Haugaard’s installation Pull up if I pull up is included in Won’t Lovers Revolt Now. While Haugaard’s work benefits from its distinct, intimate setting and an audio component, in many ways Pull up if I pull up shares more qualities with Estes and Ghenov’s work than the remainder of what is presented alongside them in the main galleries. Though sculptural and multisensory, Haugaard’s installation employs mirrored images, geometry and multiple sightlines to explore perspective and form. Like Ghenov’s paintings, works by Matt Philips are made on linen, but they fail to move beyond elementary recombinations of geometric forms, and encountering them one beside the other does little to dull this disappointment. In this exhibition, Estes’s Heart Poem drawings are twice hung in side-by-side rows, but their variety and sensitivity allows for this sort of presentation to succeed in a fashion unavailable to Phillips’ blander compositions. While attuned to the other artists’ concerns with depicting patterns and interior space, photographs by Sarah Smith seem out of place, as if they belong in another exhibition altogether.

Artist Iva Gueorguieva’s wall hanging 1:30pm lends undeniable drama to the gallery where it is installed, but ultimately it’s difficult to parse what relationships it — or Gueorguieva’s other contribution to the show — have with the strongest works in Won’t Lovers Revolt Now. The most viable connection is to Covered Ground, a sculpture made by artist Lisa Iglesias comprising layers of black paint that have been poured over a flag. A more visceral version of the black American flag poster she created with her sister for this exhibition, Covered Ground engages with the dripping verticality of Gueorguieva’s wall hanging, but possesses more significant weight both materially and emotionally. A smaller version of Covered Ground is visible from the Whitespace courtyard, hung on the back side of a moveable wall showing other works within the gallery. Stark and alone, it’s the only work present in this temporary window front, and its potency feels magnified as a result, conveying the sort of combined personal and political pressingness implied by the show’s title.

The exhibition’s strongest works provide more than enough substance without unnecessary additions, and, looking at the small black flag thick with paint, you can’t help but wish the whole show could have been presented with this level of restraint and precision.