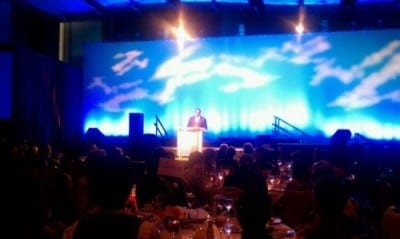 Atlanta Mayor Kasim Reed will rescind the proposed $235,000 cut in the budget of the city’s Office of Cultural Affairs. He took the occasion of the May 19 Metropolitan Atlanta Arts Fund luncheon to announce his decision. “If you’re gonna say it, you gotta live it,” Reed explained, to a chorus of applause. “I’ve always said art changes you, enriches you, and for a moment I forgot that and worried about the budget instead.”

The mayor also spoke encouragingly about the future of a bill that would allow each Georgia county to hold a referendum on a sales tax of up to 1 percent that could be totally or partly dedicated to cultural funding. Georgia House Bill 1049 failed to make the House floor at the 11th hour during the last legislative session.

“I think we have the Senate,” Reed said. “We need your help to get the House.” Questioned after the luncheon, Reed said he made the decision on Wednesday while jogging. He said the May 12 City Hall demonstration on the issue had no bearing on his decision. “I get protests all the time,” the mayor said.

UPDATE 5/24/2011: This comment came in from Atlanta artist and activist Evan Levy, who, for decades, has been protesting low arts funding and the perennial threats to cut that arts budget. Since his note arrived with an image of an old AJC article, I’m posting it here so everyone can see it. — Pierre

Atlanta Government threatens to cut the arts every few years to distract the arts community from the real fact that cultural funding for a major metropolitan “world class” city is insignificant, and downright embarrassing. This has been going on for 20 years. It seems like the assumption from city politicos is that the arts community are fools (and we prove it over and over again). Does anyone remember Kasim Reed’s comments at the cultural forum when he was running for mayor? How about Shirley Franklin’s?

Those who are not aware of history are doomed to repeat it. Here is an article from 1994 when the BCA’s budget was 2 times what it is now.