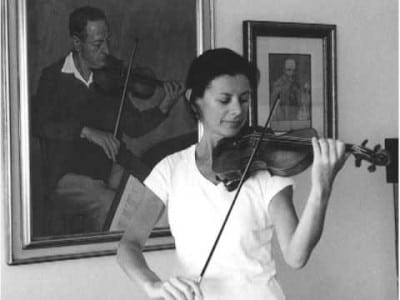 She’s calling it her “legacy.” Violinist Cecylia Arzewski is the former concertmaster of the Atlanta Symphony Orchestra and one of the most interesting personalities in the local musical community. She has been practicing and performing Johann Sebastian Bach’s six works for solo violin all her life. The journey that started when she was learning the music as a young girl will end, at some existential level, later this month when Arzewski finishes recording the Bach violin sonatas and partitas in New York.

To prepare for the recording sessions, at the acoustically radiant Academy of Arts and Letters in Manhattan, she’s been playing Bach far and wide, from regional festivals to local Sunday afternoon recital series to Spivey Hall and Emory University. (Read a review of her January recital here.) 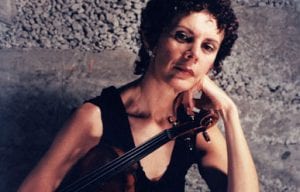 She returns to Spivey this Saturday, May 21, for her last live warm-up. Next week, it’s back to the academy to lay down the remaining tracks. Her producer is the Grammy Award-winning Steven Epstein. Although Arzewski has cut CDs for Naxos, including a just-right recording of Earl Kim’s Violin Concerto in 2005 — a better version than Itzhak Perlman’s — for this Bach she’s leaning toward the Avie label, a British independent with high standards and international distribution.

I spoke with Arzewski yesterday about Bach.

Pierre Ruhe: Do you have a philosophy on playing Bach? A set of aesthetic guidelines or moral principles that encompass all the partitas and sonatas?

Cecylia Arzewski: Absolutely not. I do what feels right. I try to stay true to the modern style of playing Bach. I have a tendency to do a little Baroque styling, especially when a passage is repeated, to highlight the contrasts, where I’ll use no vibrato and other Baroque styling. But I’m not a fan of the “Baroque” style today in violin playing [i.e., associated with period instruments and historically informed performance style]. I like Isabelle Faust’s recent Bach recording. Probably my favorite is Arthur Grumiaux’s — wonderful insights and very loud and very strong, although not enough color. For the Chaconne, I always go back to Arthur Rubinstein.

Ruhe: Interesting that you gravitate to a pianist.

Arzewski: Listen, my main Bach influence is [cellist Pablo] Casals. Casals and the pianists. I love Andras Schiff’s French Suites, and the pianists in the English Suites. I’ve listened to a lot of Glenn Gould.

Ruhe: What about your teachers?

Arzewski: [Former Boston Symphony concertmaster] Joe Silverstein showed me the way into the C Major Sonata, in lessons. When he assigned it to me, I remember that he said it was “difficult.” That’s an understatement! I played the opening Adagio for my ASO audition. For me, that’s always been a very important piece.

Arzewski: Yes, absolutely, for me it does. It’s hard to not think every moment about the recording: Will this passage work? How will that passage sound when it’s recorded and played over and over?

Ruhe: Does it question your faith in spontaneity?

Arzewski: I prepare very well, and I leave nothing to chance. That’s my style. But I spent my career preparing at home and then rehearsing and performing with an orchestra. I used to play with people every day. The discipline of going into my practice room isn’t different, but the outcome for a solo recording is very different. The pressures are different.

Ruhe: I imagine that preparing solo Bach, with its emotional and technical demands, must be a little like Dr. Freud doing self-analysis, forcing himself to confront his true feelings and peeling away the layers of his psyche to reach some deeper level.

Arzewski: Yeah, it feels like that sometimes. I have a tape recorder to help me, but I never use it. The sound I get from the tape isn’t the sound I hear in my ear. So I rely on what my gut tells me.

Ruhe: Do you miss playing with the Atlanta Symphony?

Arzewski: I miss some of the people, and I keep in touch with them. I was surprised, but I don’t miss playing in the orchestra. What I miss is the music. I listened to Brahms’ Fourth Symphony on the radio the other day and I was melting.

Ruhe: How are the recording sessions going?

Arzewski: At our first session we had four days booked, but it took us only three days to get the takes we were all happy with. I’ve never worked with a producer with such good ears. After one session, I was listening to the playback with Steve [Epstein], and every time I heard something to fix, however slight, he already had it circled in pencil in his score.

You know, the academy is just two blocks from where our family lived, at 157th and Riverside, so it’s my old neighborhood, although it has changed [from immigrant Jewish to Hispanic]. It just feels like it’s come around, like I’ve been waiting all my life to do this, and now I’m approaching the finish line.