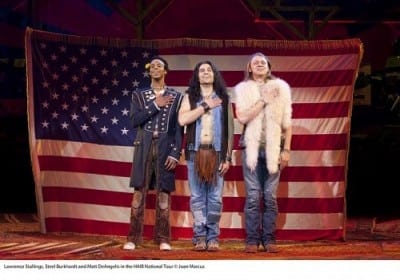 Review: Burn your draft card, let the sunshine in as “Hair” returns to Fox

In one of the most quoted movie lines ever, a girl at a dance in the movie “The Wild One” asks biker Marlon Brando, “Hey, Johnnie, what are you rebellin’ against?”

Well, in “Hair,” you get LBJ, draft cards, the war in Vietnam and square parents who are uptight over their sons’ rebellious long hair: “shining, gleaming, streaming, flaxen, waxen.” It’s a time capsule of issues that resonated in 1967, when the “Tribal Love-Rock Musical” premiered. 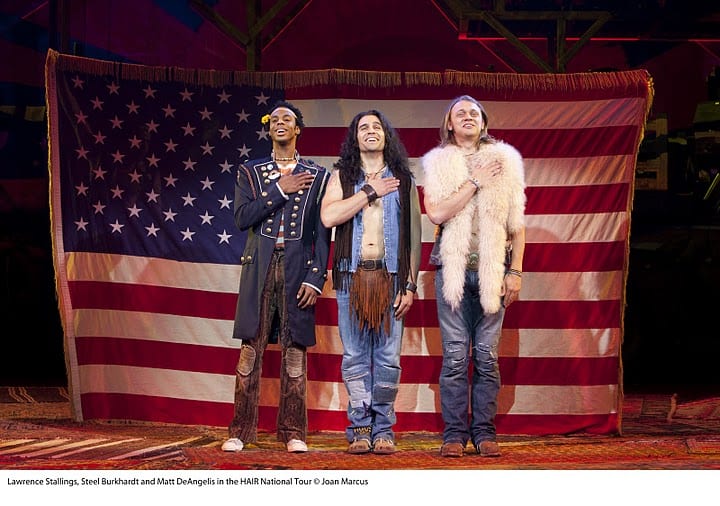 But you also get the willingness of old people to send young people off to die in wars that may not accomplish anything, racial stereotyping, concerns about pollution, and the eternal friction between the dreams of youth and a society that is not interested in — or is even threatened by — those dreams. A gaggle of issues that resonates today as much as it ever did.

The revival of “Hair,” which is playing Atlanta’s Fox Theatre through Sunday, could have been an exercise in kitsch nostalgia, with its references to Timothy Leary, its mega-groovy threads and Afros as big as punch bowls. Instead, when it was revived on Broadway in 2009 (and won a Tony Award for Best Revival), it was revved up by director Diane Paulus into a transcendent celebration of the exuberance of youth that pulses with mischief, energy and innocent eroticism. 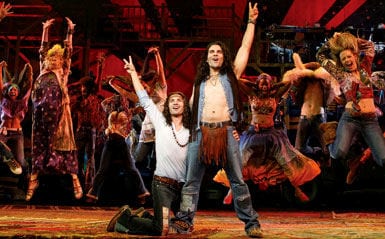 The cast of 32 frequently pours off the stage and into the theater, dancing with audience members, clambering on the backs of seats, passing out flowers and racing down the aisles as if pursued by bears. At one point, Berger (Steel Burkhardt), the Merry Prankster lead, asks a woman in the front row to hold his pants for a while so he can frolic in a loincloth. They handle the soft numbers (Caren Lyn Tackett’s “Easy to Be Hard”) and the majestic ones (the cast’s deeply moving “The Flesh Eaters/Let the Sunshine In”) with verve.

Thank goodness the cast and staging are so vivacious, because the story in “Hair,” such as it is, is about as focused as the “be-in” the characters attend. The only thread resembling a narrative is that of Claude (Paris Remillard) agonizing over whether to burn his draft card, escape to Canada or join the Army and go to Vietnam.

The extremely loose format gets wearisome in Act II, particularly during Claude’s lonnnnng bummer drug trip — although there aren’t many shows where you see a black female (Nicole Lewis) playing Abraham Lincoln in a stovepipe hat and bustier, high-stepping as if in a minstrel show. The unconnectedness works fine, though, when the cast tears through fun songs like “Sodomy,” “I Got Life” and “Black Boys.”

For all its movement egalitarianism, “Hair” is still notably the guys’ show. The first four characters who come forward to introduce themselves and take a solo are all male, and the women are identified mainly by their relationships to the men they love. Even in the hippest pads of the counterculture, patriarchy was alive and well and operating as it always does. Some trappings, such as hair length and draft cards, may change, but some institutions rarely do. Not even “Hair” can transcend that.