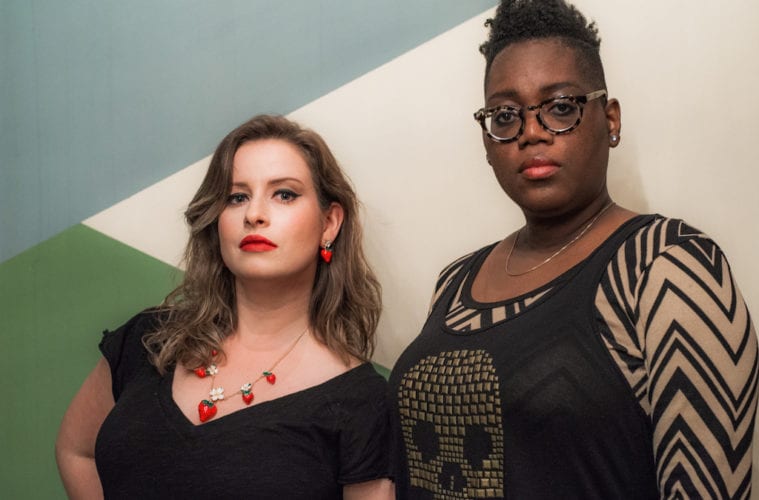 The Bleux Stockings Society, a literary group and monthly live reading event at the Highland Inn Ballroom & Lounge led by female-identifying and non-binary folks, has been testing the staying power of audiences’ waterproof mascara for the past three years. Writers are invited to perform their real-life stories around a specific prompt or theme to humble devotees hoping to be fed honesty and hope by each other’s work.

And the series has one primary motive: showcasing marginalized voices.

It’s a mission not far off from the group’s historical namesake. According to the Bleux Stockings Society Facebook page, “the inspiration for the group comes from the original Blue Stockings Society, which was founded in the 1750s by women, for women, to discuss art and literature by others and themselves. The members supported each other’s work and banded together in a time when academia was considered a distinctly male territory.”

Bleux Stockings Society updated the spelling “to pay homage to the original group, while also clarifying that this is the second go-around, and the group will be evolved from its decidedly white-washed, wealthy origins.”

Atlanta’s modern Bleux Stockings, founded in 2016 by Ellaree Yeagley and Amy Dee Tecosky, has “open” (public) and “closed” (private) shows, to help ensure that writers know that they have a safe space in which to share their experiences. It is dedicated to intersectionality and centered on the experiences of trans women, women of color, queer women and non-binary people. The group closed its third-anniversary show in January 2019 with a goodbye from teary-eyed coproducer Tecosky as she welcomed Alayna Huft Tucker as her successor.

“I had wanted to start an Atlanta literary series of my own for a long time,” says Tucker, “but things weren’t clicking. When Rita asked me if I wanted to coproduce Bleux Stockings, I immediately gave an enthusiastic ‘yes!’ It’s the show that I need to be doing. I can bring something to this.”

“Amy laid the foundation for what we have, and we intend to expand on the core values of Bleux Stockings and make it even more awesome,” adds Nicole Leslie, who joined the Bleux Stockings as coproducer in 2016 and helped shape the platform into what it is today.

It was seemingly written in the stars that Tucker would come on as coproducer — she and Leslie were readers at the very first Bleux Stockings show. “It’s cosmic,” Leslie says.

While Leslie and Tucker look toward the future and consider the changes they will be making to the series, they are unwavering on the group’s core belief that representation matters and that all are welcome on the Bleux Stockings’ stage.

And don’t worry if you’re not a veteran performer. The Bleux Stockings believe everyone has a story to tell, each one as valuable as the next. The audience is welcoming and enthusiastic, and no one should feel afraid to apply to speak. To the Bleux Stockings, hearing stories is a way to connect and to heal.

The Bleux Stockings Society holds its events at the Highland Inn Ballroom & Lounge on the third Monday of every month, minus its summer hiatus.

You can join the Facebook group to find out the monthly prompts and stay updated on event dates. Doors open at 8 p.m., and the show starts at 8:30 p.m. There is a $10 cover, and a percentage of the proceeds go to a charity chosen by the Bleux Stockings Society.