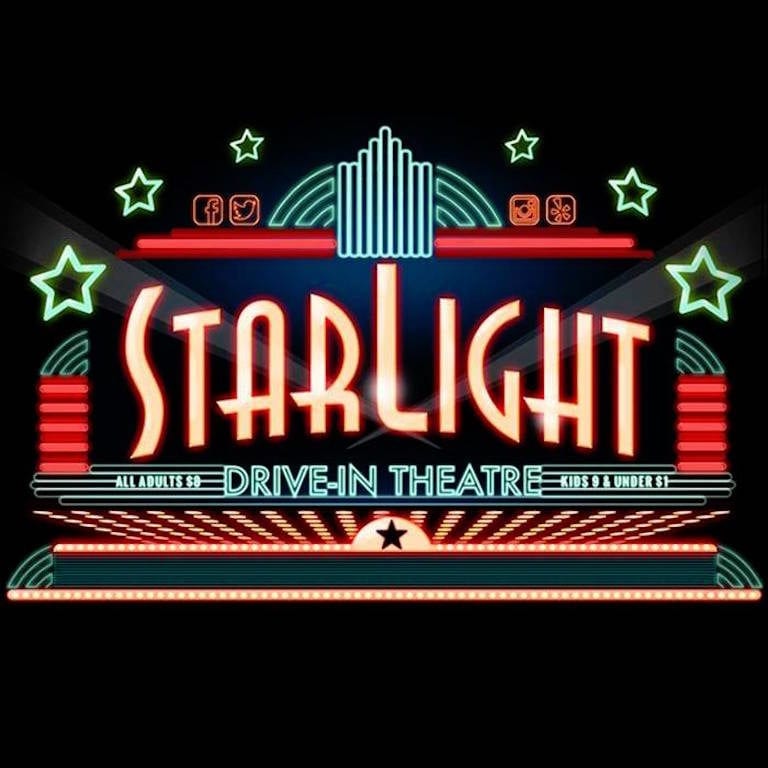 Atlanta's last drive-in, the Starlight, has survived for 70 years, thanks in part to the diverse, dedicated patronage of the surrounding Southeast Atlanta neighborhood.

70 years at the Starlight Six

On a recent Friday night at the Starlight Six Drive-In, a weathered minivan rolls up to the ticketing window with eight kids bouncing in the back seat, one exhausted woman in the front. Next, a pickup truck with a couple on an anxiety-ridden date, followed by a Jeep with three teenagers who giggle through the ticket-buying process and smell like weed. The Starlight’s employees, fueled by Baja Blast Mountain Dew, jump at the chance to help folks navigate the drive-in’s dark lanes and undulating, concrete humps.

“It all depends on the weather,” says employee Simone Robleto. On this Friday night, it’s still chilly out, the spring temps not yet making it past sundown. “We’ll probably get, I dunno, 100 cars here tonight.”

“With one of the big blockbusters — Black Panther, Straight Outta Compton — we’ll sell out, especially in the summer,” says night manager Shawn Culver. For the Starlight, that means close to 2,000 cars and between 5,000 and 8,000 people.

This year marks the 70th anniversary of Atlanta’s famous drive-in. In addition to the daily grind of putting up movies on three screens every night, as well as an expansive flea market every weekend, the Starlight held the most recent premiere for Atlanta, the FX show produced by and starring hometown hero Donald Glover.

“Donald personally chose the Starlight Drive-In as the venue,” a spokesperson for the show said. “Starlight was a place he and his family would go to while he was growing up in Atlanta.”

Former manager and current Starlight enthusiast Jim Stacey can relate. He describes three generations of his family going to the theater.

That is no small feat. The Starlight is one of only about 330 drive-ins left in the country, one of only five left in Georgia and the last drive-in in Atlanta — all of which beg the question: What’s kept the Starlight going the past seven decades?

The answer is about as ATLien as you can get.

Atlanta’s Starlight shared in the drive-in’s nationwide heyday of the 1950s, opening as a single screen in 1949, then adding another screen in 1956.  The “Starlight Twin,” as it was known back then, was the only double drive-in in Georgia at the time, and one of the biggest theaters in the South, marketed as a cheap and comfortable entertainment option for baby-booming families.

This is the same argument used to advertise the first drive-in theater, patented by Richard Hollingshead in Camden, New Jersey, in 1933. “The whole family is welcome, regardless of how noisy the children are,” read its first marketing slogan. People could eat, drink, smoke and make out in peace while watching their movies in the comfort of their own vehicle — all for a lower price than tickets to a baseball game or the theater.

While drive-ins struggled during the Depression and war years, the concept took off post-war, dovetailing with the skyrocketing birth rate, new notions of leisure and family time, an emergence of a new teen culture and the growth of the automobile business. The drive-in became a go-to form of entertainment, with over 4,000 in operation by 1956, the same year the Atlanta Journal-Constitution announced the “Twins are born!” after the Starlight added its additional screen. By 1958, drive-ins accounted for about one-third of all theaters operating in the country.

The drive-in boom of the 1950s would produce the iconography of drive-in culture for generations to come: milkshakes, poodle skirts, James Dean-esque teen rebels and white families in Ford Thunderbirds. Look no further than the Starlight’s current website to see the sticking power of this imagery.

As with all 1950s mythology, however, reality was a lot more complex and diverse than these images suggest.

In their Southern Spaces project on drive-ins across the South, Robin Conner and Paul Johnson note that, “Despite many studies of discrimination in other entertainment venues, scholarship on segregation at the drive-in is almost nonexistent,” though they go on to say that “there are indications that such segregation may have been the norm in Dixie.”

Even still, the racism and de facto segregation that surely existed in Southern drive-ins was likely a vast improvement from the codified, legislated segregation of the indoor movie theaters of the day. Drive-in historian and expert Susan Sanders has said that drive-in theaters in the South were likely more welcoming to black audiences than their indoor counterparts.

Whatever the Starlight’s exact relationship with segregation, our hometown drive-in’s history is more diverse than its 1950s glossy ad images indicate, and a lot more complex than the whitewashed nostalgia that drive-ins, including the Starlight, still trade in. It’s an important point because for the Starlight to survive the lean years of drive-in attendance and to continue to get by today, it’s taken a lot more than white, retro or rockabilly aesthetics; it’s taken the communities around the Starlight and the dynamics of southeast Atlanta.

In the ’70s, drive-ins across the country began to fall to shopping malls and housing sprawl as suburbanization encroached on their large, once rural tracts of land. The Starlight’s location on “low-value” land protected it, however.

Boxed in by a trucking line (Moreland Avenue), a trucking depot, the Dekalb County Landfill, a cemetery and section 8 housing, the Starlight’s location has been undesirable to developers, which surely comes with its costs for the neighborhood but is a beautiful thing if you’re a Starlight fan.

In terms of the drive-in’s survival and success, former manager Stacey says, “it’s geography cannot be understated. It’s on sacred land, in a way.”

Still, the Starlight soldiered on.

Partnerships between the owners at DeAnza Land and Leisure Corporation and local event planners helped. With programming like derby car racing, Halloween spook shows and “Drive Invasion” — a festival featuring B-movies, psychobilly bands, hot rods and more — the Starlight tapped into the increasingly hip vintage vibe through the ’90s and the aughts.

Starlight’s devotees are what really made the difference, though.

“The Starlight has a good core audience,” says Ralph Nardoni, Starlight’s current manager. “A lot of drive-ins lost their core, but we’ve got people who’ve always gone to the drive-in and continue to go. They’re good people. It’s a little bit of a lower-income area, and we’re entertainment at a lower price point.”

Indeed, an eclectic mix of southeast Atlanta locals have been going to the Starlight for the past 70 years.

As Stacey puts it, “It’s surrounded by neighborhoods with no other options for entertainment. . . . At any given time, you’ve got people showing up after prom; you’ve got regulars whose families you see grow over the years; you’ve got four generations of a new immigrant family.” He adds, “the core audience lives within five miles of the place, and the flea market sells fresh produce in a grocery desert.”

This brings us to the other key component of the Starlight’s success. Every weekend all year round, hundreds of vendors set up their stalls on the Starlight’s grounds, and shoppers descend.

“The flea market works hand-in-hand with the drive-in,” says Nardoni, who goes on to describe the market as rooted in the same neighborhood communities while also attracting an eclectic customer base from all over Atlanta and beyond.

On the Saturday I visit the flea market, the sun glints off the movie screens’ rust and decay, and they seem like gaping, forgotten billboards out beyond the hubbub of the market. Everyone’s communicating across languages and cultures, but there’s a common understanding: Deals are to be had.

“Everyone comes here,” says Leonce, a young man who’s strolling the avenues of stalls. “I’m from Cameroon — the flea market is for everyone. You can get things cheap!”

Amidst the noise and intercultural exchange, somehow the pervading vibe is still the hushed familiarity of a lazy Saturday. A policeman, ostensibly in charge of managing any problems that might arise, gently shuts his eyes while sitting in the back of a pickup truck behind someone’s fruit stall.

Most people are speaking Spanish, but two men pass by deep in conversation in Mandarin. An old white man describes the intricacies of a piece of plumbing tubing in a rich southern accent, and a woman yells out with Caribbean intonation, “One dollar ropa on the rack!”

Ja Rule plays out from behind an array of potted ferns, barely eclipsing the Mariachi pop flooding in from the neighboring stall. There is a pillow for every K-pop star in the band BTS, and there’s a perfume called “Stiletto” that comes in a tiny high-heeled shoe. There is a sea of bins with all of life’s random plastic, in bulk: toothbrushes, googly eyes, a dongle for every device on the planet. People squirt hot sauce and lemon juice into their bags of chips, and fresh pink and tan eggs sit like pearls in crates of 60.

The flea market’s “core audience,” to which Nardoni and Stacey refer, is a dynamic, diverse one — a sun-soaked daytime inverse of the drive-in’s nighttime crowd. The Starlight has survived for 70 years because the surrounding neighborhoods have stood by it and have invited people from all walks of life in to see a movie on-the-cheap by night, and buy some Hot Takis in bulk by day — and really, what’s more Atlanta than that?

Nardoni and Stacey say it isn’t easy to manage a space that brings so many different kinds of people together and that the Starlight isn’t without its rubs, disagreements or emergencies, “but that’s life,” says Stacey, “that’s just the world. [The Starlight] has a long history of catering to many types of customers, and for there to be as little trouble as there is, is pretty spectacular. Everyone is welcome at the Starlight, as long as you behave.”

Stacey goes on to detail a few of the more comical vehicular mishaps: the low-riding McLaren sports car that got stuck on one of the drive-in humps; the Rolls-Royce he had to jump-start every single week; the truck that, having been accidentally left in neutral, began to roll down the biggest hill, hitting with increasing speed each drive-in hump along the way until the last humps were launching it eight feet into the air, the final hump sending it soaring into the woods behind screen two, where the truck ultimately came to a precarious halt, wheels still spinning though now suspended by a tree’s uppermost branches.

Here’s to another 70 years, Starlight.