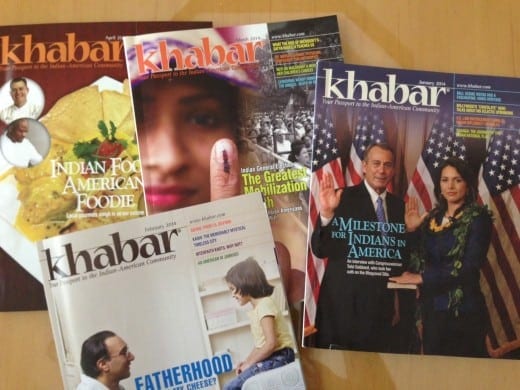 Behind the Scenes: Editors of “Khabar” create magazine for and about Atlanta’s Indian Americans Khabar, a monthly features magazine serving the 79,000 Indian Americans in metro Atlanta, combines the literary sensibility of the New Yorker with the cultural and communal vibe of Creative Loafing. It critically examines hot-button issues such as the Indian general election and the strained diplomatic relations between the United States and India after the arrest of India’s deputy consul-general Devyani Khobragade for labor law violations.

It also is readers’ go-to for Bollywood gossip, an account of the Atlanta Indian Idol competition or word of a middle-schooler’s science award.

At Khabar’s helm are editor in chief Parthiv Parekh and managing editor Murali Kamma, both of whom immigrated to the United States in the 1980s. Together, they shape the magazine’s content, pen editorials and keep abreast of trends in popular culture. Their natural, easy-going rapport stems from a decade-long collaboration on issues affecting the Indian American community, shared political views and a passion for excellence in journalism.

“What has been a surprising aspect of our American journey is that as we have become more rooted in America, our engagement with India and Indian culture has increased, not decreased,” says Parekh. “When I first came here in 1986, I had assumed that a life in America would be devoid of all things Indian that I loved, such as cricket, Bollywood movies, regional food and merchandise, classical music and performing arts.”

That was true for the first few years but no longer. “Due to globalization and technological advances, Indian culture has become widespread in America. As a result, we live more authentic Indian lives here than most urban Indians do in India itself.”

He notes that Indian American teens are taking up artistic traditions such as Kathak dancing or Carnatic music even as Indian youth are abandoning them.

Born and raised in Mumbai, Parekh came to Atlanta in 1986 at age 20. He was working as a bank teller when he cofounded Khabar in 1992 with his brother, Mehul Parekh, and Rajesh Jyotishi, an insurance agent. Over hot wings and beer at the Three Dollar Café on Windy Hill Road, the 20-somethings envisioned a new media venture to meet the needs of the growing local Indian American community. Though they had hoped to start a weekly newspaper, their limited budget and resources compelled a smaller publication. Khabar, a monthly mailer offering coupons to Atlanta-area Indian American businesses, was born. In 1995, after three years of building a solid base of advertisers and consumers, the founders returned to their original vision. They transformed Khabar from a coupon-mailer to the narrative format of an eight-page newsletter. They cultivated a group of writers, some of whom write nationally and internationally.

In 2002, when Khabar evolved to a full-color glossy features magazine, Parekh quit his day job as a real estate agent and became its editor in chief. Jyotishi, who had built a thriving financial services firm during this time, parted with Khabar in May 2013. Mehul Parekh is the magazine’s art director, and Parthiv Parekh’s wife, Sonal, is the advertising manager.

He was an assistant branch manager at a bank when he wrote his first article for Khabar in 2002. Soon thereafter he became a regular contributor. In 2006, he left the banking industry to pursue his lifelong love of writing. He became managing editor in 2008. In addition to his work at Khabar, Kamma pens short stories and essays, which have appeared in India Abroad as well as the Atlanta Journal-Constitution.

Based in Norcross (but moving soon to Duluth), the for-profit magazine is funded entirely by advertising revenue. It boasts a circulation nearing 30,000 (including 16,000 subscriptions) and is distributed free outside of South Asian businesses in Georgia, as well as in Alabama, Tennessee and South Carolina. Its website maintains digital versions of its issues back to 2007.

The editors share concerns that are typical of most publications today: expanding Khabar’s digital presence, social media platform and audience.

Khabar’s core constituency and target audience, however, is Indian American. The magazine is particularly appealing, he says, to first-generation immigrants and others who already have a strong attachment to their Indian heritage. Yet, he acknowledges, “The Indian American community is much more diverse now. So, yes, there’s definitely the need to broaden our approach and make sure the magazine is engaging and relevant to younger readers.”

He quoted Akhil Sharma, the author of Family Life, who in an interview for the April issue said, “I think we as a community are a little more at ease with saying, ‘This is not the only way to be an Indian.’”

RECOMMENDATIONS FROM THE EDITORS

“From Murder to Meditation”: Buddhist teachings in an Alabama prison.

“Studying India”: South Asian studies as an academic discipline at the university level.

“Jews of Two Worlds”: Jews living in the Holy Land.