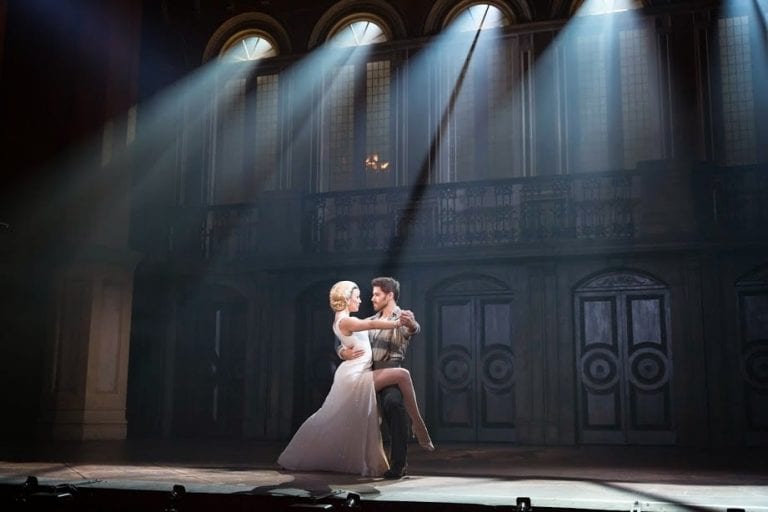 Well, surprise surprise! Andrew Lloyd Webber’s Evita isn’t the most expected choice for a makeover of sorts but the current touring version, compact and smartly cast, is a dandy production, as likely to satisfy those diehards (like me) with their “Don’t Cry For Me Argentina” ringtones as well as newbies who don’t know Eva Perón from a reality TV show personality.

Webber’s 1979 Broadway smash charts the rise and fall of Eva Duarte, who became Argentinian royalty after she married Juan Perón. Running through June 8 at the Fox Theatre, this take of Evita proves the musical can holds its own more than 30 years after it was conceived.

Evita opens with the announcement of the passing of Eva in 1952 and the subsequent mourning around the country. Che (Josh Young), who narrates, comments on the hysteria before introducing us, via flashback, to young Eva (Caroline Bowman) in 1932. Longing for more than life in her rural village of Los Toldos, she comes to Buenos Aires on the arm of tango singer Agustin Magaldi (Christopher Johnstone) and becomes an actress. After a carousel of lovers she meets Juan (Sean MacLaughlin) and climbs to power, loving the high society lifestyle. Juan eventually becomes president, but Eva finds she is not universally loved. She plans to continue her role in the family politics but ultimately gets too sick.

A few years ago, after being restaged in London, Evita returned to Broadway with Ricky Martin as Che in a tepidly reviewed but popular remount. The subsequent tour could very easily have become stock. It’s refreshing to see that it’s been tweaked for the road and given a first-rate cast. More than anything, under the direction of Michael Grandage, this is an Evita that moves. The first act flies by. This new version is lean and simple and not overdone, with choreography by Rob Ashford that accentuates the action but doesn’t push it into camp. It’s very theatrical, from satisfying numbers such as the opening “Requiem” to a crowd-pleasing “A New Argentina” just before intermission.

Tim Rice’s lyrics have always winked at the titular character and her often disingenuous nature and not downplayed her naysayers. Even when it mixes in politics, however, Evita has never been a heavy show. Some of the most inspired music is the lightest, from Eva’s debut in the city with “Buenos Aires” to her wardrobe-worshipping “Rainbow High” to “Perón’s Latest Flame,” where the upper class literally sneer at Eva. For the most part, the songs have remained the same save for the addition of “You Must Love Me,” the Oscar-winning number from Madonna’s 1996 film version. It’s nicely performed here, although it seems a little out of sync.

Bowman perfectly brings Eva to life from a naïve but ambitious 15-year-old girl to a world class, divisive figure. A few times she struggles to sustain some of her higher musical notes, but for the most part she’s impressive, always in character and full of charisma. She has a rich supporting cast — McLaughlin, who makes a super Juan; Johnstone, a knockout in his early scenes; and Krystina Alabado as Juan’s mistress, who has a striking, vulnerable rendition of “Another Suitcase in Another Hall.” Yet this touring production will be remembered for the amazing Young. A Tony nominee for Jesus Christ Superstar who got his professional start in Atlanta with Les Misérables, he’s a remarkable Che with a commanding baritone. Like Che should be, he is as cynical as he is fascinated by Eva. Young makes the character the musical’s magnetic center.

The final passages get a little goofy — an ending “Montage” that gives us an Evita 101 in about a minute and some mawkish moments as Eva’s health declines — but it can’t take away from the general high quality. Heck, even the sound — often an issue at the Fox — was spot-on opening night.

When I heard Evita was making a return engagement, I scoffed, especially considering the uninspired version that passed through town in 1995. I eat my words — this Evita is worth celebrating.