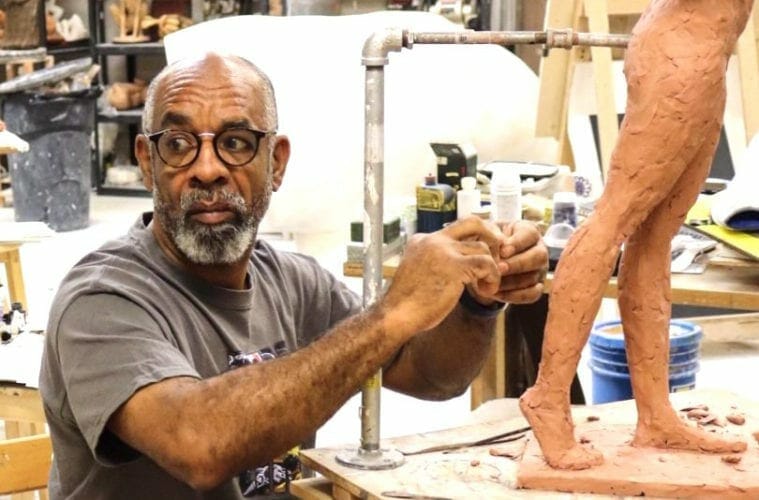 Basil Watson on public art, his family’s connection to MLK and his latest sculpture

For sculptor Basil Barrington Watson, the opportunity to create a 12-foot-tall bronze monument to mark the legacy of the Rev. Martin Luther King Jr.’s long fight for civil rights was more than a simple commission. It also was about family legacy.

His father, painter Barrington Watson, was a visiting professor at Spelman College in 1970 when the school asked that he paint a portrait of King. “When I submitted my proposal and it was accepted, it was like a continuation of my father’s legacy,” says Watson. “I considered it a great honor for my family and our history.”

Atlanta Mayor Keisha Lance Bottoms presided over a ribbon-cutting ceremony to mark the installation of the statue, titled Hope Moving Forward, last month. The monument — located at the intersection of Northside Drive and Martin Luther King Jr. Drive — serves as an example of the mayor’s advocacy for the city’s Public Art Collection. It also signals the vitality of the MLK Innovation Corridor Project, the $43 million urban-renewal initiative designed to enhance walkability, bikeability and curb appeal in neighborhoods bordering Mercedes-Benz Stadium. “This sculpture is a fitting and timely tribute to Atlanta’s son, Dr. King,” Bottoms said at the ceremony. “Erecting [it] underscores our administration’s commitment to creating my vision of one Atlanta while celebrating Dr. King’s dream of a beloved community.”

The first of seven installations commissioned to honor the legacy and global influence of the civil rights leader, Hope Moving Forward was the winning sculpture proposal of a selection committee made up of representatives from the Mayor’s Office of Cultural Affairs, MARTA and Clark Atlanta University.

When Watson’s proposal was accepted, the monument took on a highly personal meaning.

Watson established his home and studio in Lawrenceville after migrating to the United States from Jamaica 19 years ago. He says he’s aspired to carve impactful, iconic outdoor sculptures since his student days at the Jamaica School of Art, now part of the Edna Manley College of the Visual and Performing Arts, in Kingston. In the 40 years since, his larger than life-size sculptures of Olympic gold medalists Usain Bolt, Shelly-Ann Fraser-Pryce and Asafa Powell — among others at Jamaica’s National Stadium — stand as a testament to his steadfast vision, discipline and professional ambition. His Rings of Life commission was unveiled by Prince Harry in 2012, in honor of Queen Elizabeth II’s Golden Jubilee. And four years ago he was awarded the Order of Distinction (Commander) by the Government of Jamaica in recognition of his contributions in the field of art.

Drawn to art from an early age, Watson cannot identify what first sparked his interest. But he grew up hearing stories about how, as a toddler, he’d stand transfixed in front of his father’s paintings. The elder Watson, known as the father of Jamaica’s modern art movement, was the first director of studies at the Jamaica School of Art (1962–66) and official portraitist of several Jamaican prime ministers, including Alexander Bustamante, Michael Manley and Edward Seaga. Karl “Jerry” Craig was the principal at the School of Art when Watson studied there. “He drew and carved so beautifully, and was so self-assured, which is a marvelous thing for a youngster,” says Craig. “I always knew he would be successful. The thing I admire most about Basil is that he never grew complacent or comfortable as his star rose. On the contrary, his discipline and work ethic are as keen today as they were when he was an emerging artist.”

Watson cites his father, whom he calls “a master draftsman,” and Auguste Rodin, as two of his greatest role models. He is a lifelong sports fan and athlete (Watson has been a student of karate for 40 years, and holds a sixth-degree black belt) who is inspired by the heroic in mankind. He credits his mother, Gloria Watson, for imparting the soft skill sets that inform and animate his expression as an artist.

“My mother was my most important teacher when it came to empathy, the power of observation and sensitivity,” says Watson. “She always looked to the light and put negative things behind her. When she had to scold or punish me as a child, 15 minutes later she would come and hug me, console me and make sure I was alright. Even when people were on her wrong side, she would brush it aside and feel empathy for them.”

Watson’s mother’s influence is evident in the artist’s depiction of King — whose forward-leaning posture implies momentum; upturned chin telegraphs courage; arms, extended upward and outward, signify his openness to human connection; and a dove taking flight from the open palm of his right hand represents his unwavering stance on non-violence.

In short, Hope Moving Forward is a monument to optimism.

Watson worked on the piece in the solitude of his studio where the soundtrack tended to be a mix of King’s sermons, NPR, music, sports radio and political podcasts. He says King’s message of reconciliation, love, healing, working together and looking to the light served as a North Star. Looking back, he likens the two-year process to holding a pearl that gradually became a heavy weight in his hands, and says the act of letting go was bittersweet. Now that his homage to an icon occupies a place of pride in the city, Watson feels relieved and excited to see how others will respond.

“President Biden says, to heal, we need to remember,” says Watson. “Monuments can help us remember, understand, analyze and preserve our shared history in order to move forward.”

But he also thinks building community and embracing commonality is important, and that public art plays a key role in that. “If we expand our concept of society, and imagine it as an extension of our homes, we’ll understand the real significance of memorials and statues,” Watson says. “Just as we seek to decorate our personal spaces with things that affirm our sense of self and contribute to a feeling of well-being, public art can enrich our lives, teach our children about the world, and reinforce the correct values.”