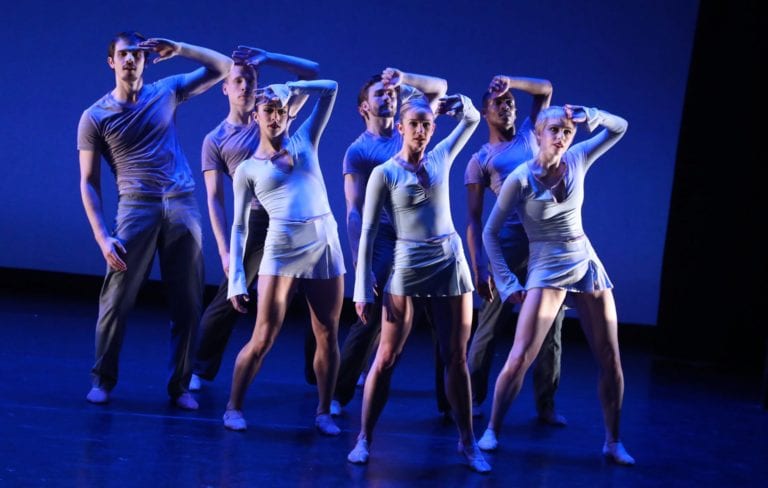 This past Thursday evening, Off the EDGE contemporary dance festival opened at Kennesaw State University’s Dance Theater with a savvy mixed bill that featured Atlanta’s Terminus Modern Ballet Theatre and Philadelphia’s BalletX. In a program of premieres, these two small upstart companies, which share similar genealogies, gave Atlanta audiences a taste of what is current in contemporary ballet: virtuosic technique mixed with humor and the absurd, in dances that sketched both abstract and literal stories.

Never seen before in Atlanta, BalletX was founded in 2005 by Christine Cox and Matthew Neenan, both former dancers with Pennsylvania Ballet. With a mission to expand audiences’ conception of the classical dance vocabulary, BalletX has debuted 68 new works in just over a decade. The company has grown to 11 dancers, recently moving into a state-of-the-art facility with an aim to develop new work from a growing roster of international choreographers.

No less impressive, Terminus is now in its second season of offering Atlanta new works from both in-house choreographers Tara Lee and Heath Gill, as well as debuts from Danielle Agami and Troy Schumacher. If BalletX stands as a model of where Terminus might take Atlanta over the next decade, the future of contemporary ballet in this city is going to be exciting.

The program opened with Terminus’ premiere of Tara Lee’s Everything is Waiting. Opening to the sounds of city traffic and Jun Miyake’s iconic “Lilies of the Valley,” the company traveled across the stage in spontaneous entrances. In the first nod to the comedic nature of the dance, the five dancers queued up behind a sign that read, “Line Starts Here,” all the while fidgeting, fussing, shaking their heads and throwing up their hands in exasperation. The dancers enacted the mundane and yet profound (and profoundly frustrating) moments of waiting in our lives with new pairings through Lee’s sensual, swirling movement.

While the 40-minute piece switched between danced numbers and mimed vignettes (with more signs introduced), a couple of abstract moments stood out. Christian Clark and Heath Gill fit their body shapes fluidly into each other — despite their very different statures — wholly inhabiting the present moment and making the most of their liminal state in a striking duet. Later, company protégé Laura Morton commanded the stage with a delicate and sweeping solo. While some of her other partnering sequences felt more tentative, this moment in the spotlight showed off her huge potential. In another comedic highlight, the five dancers jammed themselves into a square of light, becoming anxious characters stuck in an elevator. Pacing, texting, snapping selfies, hyperventilating, they clamored on top of one another in an attempted evacuation, only for the doors to open onto their hilariously desperate tableau.

Rachel Van Buskirk and Alex Gonzaga had great timing. However, this capacity for comic acting felt unfulfilled. Why not just scream? Why not tear the sign up? Likewise, the tempo of the musical selections became static over time, begging for something more up-tempo or unscripted, even stillness, to shake things up. In their work to date, voice-over and pop music lyrics have supplemented their dance theater. But it was clear from the mix of elements in Everything is Waiting, which never quite seemed to come together, Terminus is on the verge of, once again, pushing its style of storytelling.

After an intermission, BalletX opened with Matthew Neenan’s Increasing. From the moment this eclectic company hit the stage, the energy was high and never abated. In this quirky neo-classical work, eight dancers played with form and symmetry. Neenan, who in addition to cofounding BalletX has been choreographer-in-residence of Pennsylvania Ballet, mined the possibilities of this pure, plotless dance, created in the style of George Balanchine, to the fullest. Set to the music of Franz Schubert, no note was left unchoreographed. For the most part, the dancers of BalletX seemed technically up to the task; any small cracks in the clarity of movement was more than made up for with exuberance and charisma.

The company’s members are a refreshing mix of heights, body types and ethnicities. So, not only was it impressive to see them take on Neenan’s quick footwork, crisp port de bras and other tricky sequences so successfully, it was a revelation for them to move as one spitfire organism in Cayetano Soto’s Schachmatt.

Schachmatt was a showstopper. Backlit, dressed in cheeky cropped khaki uniforms complete with tall black socks and riding caps, the company opened and shut their fingers and rolled their hips in a style that brought to mind both Bob Fosse and Madonna. Even as the stage became fully lit, showing off playful faces and winking eyes, their hands itched, tickled, grabbed, themselves and each other, while they squatted, kicked and jumped through the space. The dance felt like a playful spoof of something, though it was difficult to put a finger on the reference. The men preened, and the women, particularly the tiny Andrea Yorita, dominated.

Soto, a Spanish choreographer who has created dances for large ballet companies in Europe, has a sharp style that requires precise execution and stamina. Watching this 20-minute, overwhelmingly unison extravaganza, was an aerobic experience. The pace never let up, and interestingly, this almost numbed the eye to all of the dazzling gesture.

Though this particular performance had its highs and lows, the evening truly exemplified a stated ethos of Cox and BalletX (one that Atlanta and Terminus should strive for): to develop and grow a knowledgeable dance audience that enjoys experimentation and appreciates new work, with an understanding that you don’t have to love every dance, or every moment of every dance, to enjoy and be enlightened by an evening at the ballet.