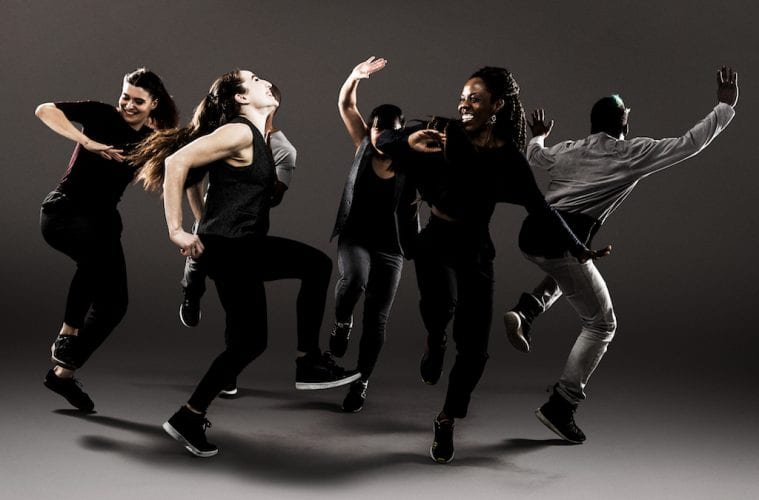 A man and a woman, dressed in B-boy and B-girl gear, face off on an open stage. He straightens his arms toward her, clapping a forceful pulse. She claps on the upbeat, intersecting the space between his arms. Soon their patterns grow intricate, smoothly intermingling breaking, house, vogueing and African dances. Cultural expressions mix while a jazz combo interweaves Afro-Brazilian percussion with infectiously joyful piano tunes, by turns recalling tribal grounds, urban street corners and old-time music halls.

It’s the opening of Ephrat Asherie’s Odeon and a mirthful finale to Off the EDGE contemporary dance festival, slated to run February 28 to March 2. Over three nights, in three Atlanta-area venues, the festival will present visiting companies ranging from nationally emerging artists — such as Asherie’s New York-based troupe and Miami-based Rosie Herrera Dance Theatre — to Philadelphia’s more established BalletX, bringing works by Cayetano Soto and Matthew Neenan, to London-based Company Wayne McGregor, a leading dance innovator with an international reputation.

Georgia State University’s Rialto Center for the Arts — in partnership with the Kennesaw State University Dance Department and the Westside Cultural Arts Center — has just announced the lineup for the festival’s fourth iteration. Curated by Ilter Ibrahimof, the concert series will feature local, national and international talent as before. But this year, longer works and larger casts — notably 10 dancers from Company Wayne McGregor (rather than two in 2014’s festival) — plus chances to mix and mingle with artists, promise to make Off the EDGE one of the year’s dance highlights. Five Atlanta-based groups will appear during the three-day fête. Terminus Modern Ballet Theatre will perform a world premiere by Tara Lee, and Kennesaw State University Dance Company will show a work by McCree O’Kelley. In addition, Terminus director John Welker has curated an evening that includes pieces by Blake Beckham, Fly on a Wall and Sarah Hillmer’s group ImmerseATL alongside work by Asherie.

Venues stretch from KSU Dance Theater on the university’s Marietta Campus to the Westside Cultural Arts Center in West Midtown to the Rialto Center downtown. While the festival’s geographic footprint has enlarged, Ibrahimof aims to keep places and people interconnected.

To that end, Terminus, hosting at the Westside venue, will perform on KSU’s stage, while the Kennesaw State University Dance Company, a longtime supporter of the Rialto and Off the EDGE, will join visiting artists on the Rialto’s main stage. Asherie, on the Rialto bill, will complete the circle by also joining local groups at the Westside Cultural Arts Center.

In addition, the festival offers chances for social connection. For an extra $10, people who purchase tickets to any of the concerts can party with the artists after Friday’s concerts at the Westside Cultural Arts Center, though the number of tickets is limited. Saturday’s culminating production will offer two intermissions for audience members to network, and Decatur’s Nectar Food Truck will be on site at the Rialto for refreshments before the show and during both intermissions. It will be Ibrahimof’s third consecutive time curating Off the EDGE. The executive director of Sunny Artist Management agency has also served as artistic advisor for the New York City Center’s Fall for Dance Festival and has since co-founded his own festival, Fall for Dance North, in Toronto. Ibrahimof’s company also partners with New York City’s Joyce Theater in a program to commission, produce and tour original work.

“Off the EDGE taught me so much and raised me, in a way, as a curator for my own festival,” Ibrahimof said.

As part of his job, Ibrahimof travels internationally and sees numerous performances. People often ask him to explain the vision or intent behind his choices. The answer is hard to put into a few words. But in a nutshell, Ibrahimof said, he seeks balance. “You want to be sensitive to the balance of both emerging and established artists, female versus male choreographers, and regions — talent from Atlanta, talent from the rest of the country, talent hopefully from the rest of the world.”

“And finding programs that give the audience a journey from start to finish,” Ibrahimof said. “It’s hopefully curated in a way that makes sense. It’s cohesive.”

“At the same time, I can’t help but just go with my gut feeling,” said Ibrahimof. “When I see things that really excite me, and get my blood going and my heart beating faster, I feel like that’s the one.”

OFF THE EDGE 2019 FESTIVAL LINEUP

Terminus Modern Ballet Theatre: Everything is Waiting, a world premiere by Tara Lee

BalletX: Schachmatt by Cayetano Soto and Increasing by Matthew Neenan

Friday, March 1, Off the EDGE at the Westside Cultural Arts Center

The early show at 7:00 p.m. features frame shift by Sarah Hillmer, performed by ImmerseATL, and Byte by Fly on a Wall.

The late show at 9:00 p.m. features No end or return, a world premiere by Blake Beckham (with live original score by Joanie Ferguson), and work by Ephrat Asherie Dance, TBD.

Artists’ After Party, 10:00 p.m. to 2:00 a.m., features a DJ and light bites. A limited number of tickets are available for $10 with purchase of a concert ticket to any Off the EDGE performance.

Company Wayne McGregor: A 40-minute program designed for Off the EDGE featuring excerpts from McGregor’s Autobiography and Atomos

To purchase a festival package (one ticket to each event), visit rialtocenter.gsu.edu.