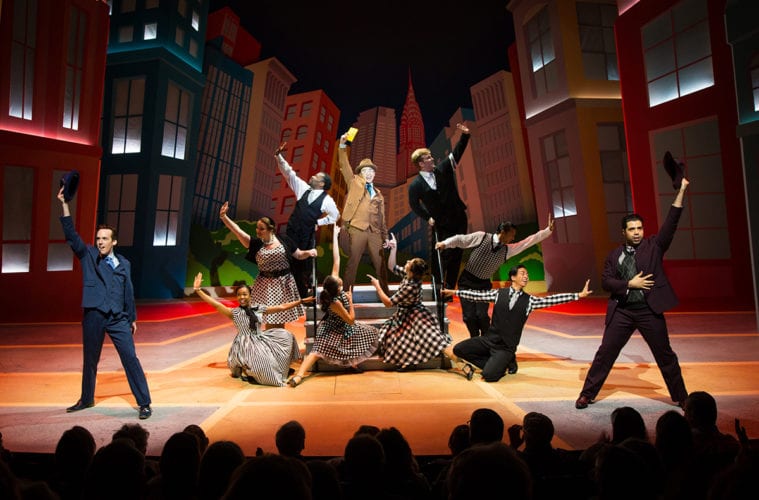 The cast of the world-premiere musical Men With Money dances their hearts out at Aurora Theatre. (Photo by Casey Gardner)

It’s 1952 in Manhattan, and it’s raining men with money — unless you’re Louis (Sean Doherty), Max (Marcello Audino) and Sonny (Kenny Tran). These three pals are barely holding on to their Greenwich Village apartment, and unless they can pay up, their landlady, Ms. Mugsten (Candy McLellan), is putting them and their stuff on the street. In a desperate attempt to avoid squalor, Louis dreams up a plan for them all to strike it rich. He and Sonny are going to find some rich tycoons (Jimi Kocina and Brian Robinson) to swindle, and Max, the straight man of the trio, is going to land a loaded lady. However, when matters of the heart and wallet get entangled, things rarely go as planned.

This is the premise of the world-premiere musical Men With Money, with book and lyrics by Bill Nelson and music by Joseph Trefler, onstage at Aurora Theatre through April 7. Justin Anderson directs the musical, which has been in development for about six years. Notably, it received a concert performance at Lincoln Center in 2016 and a reading at Aurora last fall.

Aside from reimagining 1952 Manhattan as a place devoid of racism, where Eleanor Roosevelt is president and where gay marriage is legal, everything about Men With Money feels very old-fashioned.

The jazzy score recalls Sondheim, though unlike the musical theater master, the song lyrics in this show have the depth of a puddle. The first act is especially hard to get through because everything about the pacing of this show is just a bit off. It has all the right ingredients, but the cake is dry. The title number is largely forgettable. The songs that are tucked in for filler actually prove the most memorable, such as the very snappy “Lookin Up” and the romantic “The Star I Named for You.” 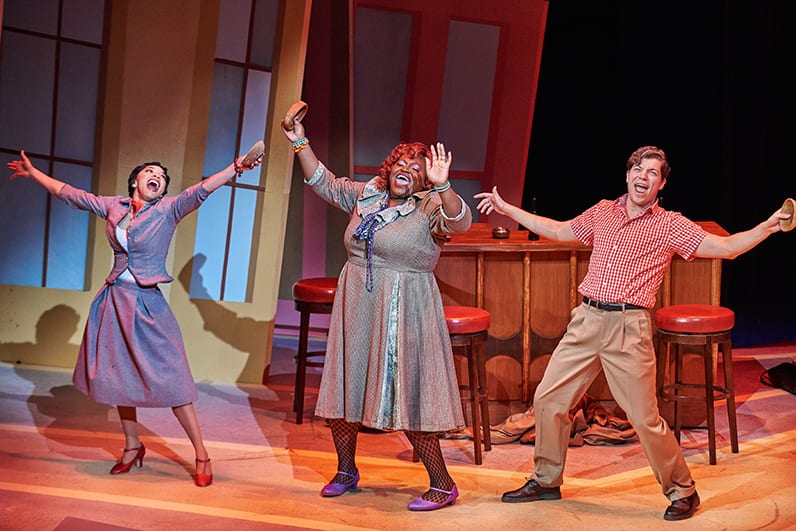 Adrianna Trachell, Candy McLellan and Daniel Wisniewski in the cast of “Men With Money.” (Photo by Chris Bartelski)

The second act is better. The high-energy opener “Give Me A Fella” and the sultry (but terribly titled) “So Hot You Can Die” are certainly fun, but they still don’t get this show quite where it needs to be.

The libretto doesn’t fare much better. The characters aren’t at all developed. It’s never revealed how these guys met. How did they come to live together? What are their dreams? Where are they from? What do they like to do for fun? Why are they so broke? The only thing we know is that they owe their landlord backpay plus 50 percent interest, but there’s no reason to care whether they get it or not.

Aurora has done what Aurora does with impressive, acrobatic choreography from Ricardo Aponte and deft musical direction by Ann-Carol Pence. Julie Ray’s pastel-colored, art deco-inspired Manhattan provides the characters with a beautiful world to play in. The angular, storybook-like set adds to the depth of the stage, and it’s beautifully lit by Mike Post. Costume designer Elizabeth Rasmusson does a fine job evoking sock hop nostalgia with poodle skirts, polka dots and bobby socks. However, none of that pretty can make up for the lack of dimension and oomph in this musical.

There are some standout performances. Candy McLellan is a hoot as Mugsten, sashaying in and out of her scenes with great comedic timing. Adrianna Trachell’s stage presence is undeniable as Thursday, the broke Girl Friday who attracts Max’s attention away from her millionaire boss (played by the charming Cecil Washington, Jr.). Daniel Wisniewski is hard not to love as Hot Dog, the guy who Louis has friend-zoned because he’s broke (or is he?). The problem here is that none of these people are the main three guys who the audience should be rooting for.

At one point in the first act, Max says, “The only way to get somewhere is to find someone who’s already there.” Nelson has attempted a great feat by creating a show that highlights that the LGBTQIA+ community has always been with us and deserves to be seen — especially in the American musical, an art form they helped create. However, by the time there’s an elaborate musical number in the men’s locker room at a tennis club, it’s been clear that Men With Money still has to find the right someone(s) to get it where it wants to go.