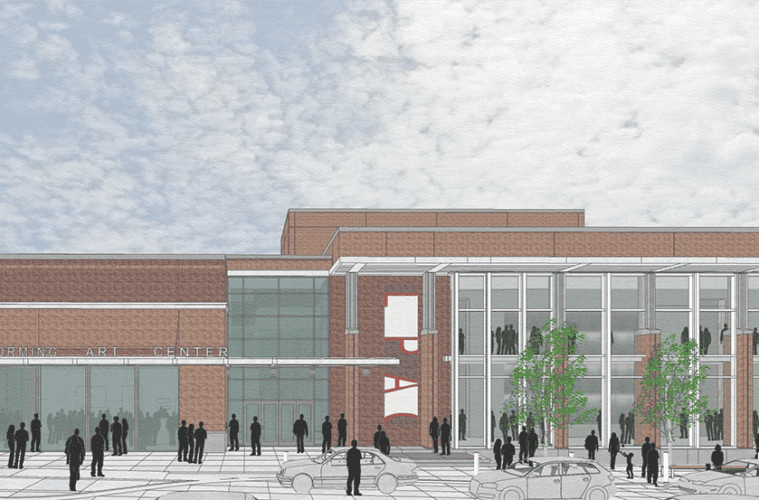 A rendering of Aurora Theatre's new space in the Lawrenceville Performing Arts Center.

At first, it was just a fantasy. As Anthony Rodriguez, producing artistic director and cofounder of Aurora Theatre, looked out of his office, saw empty space and wondered what an expansion would look like. It’s taken some time — and hundreds of hours of conversations and planning with city administration since 2010 — but now that fantasy is about to become reality.

The Lawrenceville City Council voted January 7 to proceed with plans for a $31.1 million arts center downtown, and that Aurora Theatre will manage the future Lawrenceville Performing Arts Center. John Abbott, Todd Dolson and Jason Smith of Stephens and Wilkinson Architects designed the facility and Carroll Daniel Construction will build the project. Half the funds for the new arts center will be raised by the city’s entertainment and arts partners; city leaders will unveil a demo of what the new facility will look like this spring and plan to finish it by the end of next year.

“We will program the spaces to include the widest variety of cultural arts events through four working venues, which will enable the entire campus to be used as an educational center,” says Aurora cofounder Ann-Carol Pence. “The plan is to use the classrooms, practice rooms, rehearsal hall, studio and dressing rooms not only for artists but for ongoing workforce development.”

The 59,500-square-foot facility will include a 500-seat theater, which will be earmarked for the company’s musicals, plus a cabaret theater that can be used for indoor and outdoor events. The theaters are scheduled to open in the fall of 2020. The space will include a new lobby, rehearsal space, a costume shop and a fly system.

A view of the two-story lobby and balcony area in the forthcoming Lawrenceville Performing Arts Center.

In 1996, Rodriguez and Pence founded Aurora, starting off as a small company in Duluth. The early days saw lean attendance, but steadily the company caught on. The two moved to downtown Lawrenceville in 2007. The company has long had a passion for producing musicals — the classics and new ones — but the success of its 2012 world premiere Clyde ‘n Bonnie: A Folktale seemed to push them into a new artistic league, leading to several award-winning, sold-out shows. The company hosts 80,000 patrons at 800 events each year.

They are aware that some people may feel that nothing is wrong with their current building, but they say it has its limits. The new space will give Aurora the ability to host companies of all disciplines — ones they’ve been unable to find room for. Ballethnic Dance Company, Dance Canvas and Orchestra Noir are on their list of possible collaborators.

“We do have a great space, but we don’t have a proper orchestra for the musicians — and live music is one of our core beliefs,” says Rodriguez. “In this day and age where you can see anything on your phone, a lot of the work we do is to create spectacle that we are not currently able to do. We want to engage the next generation of theatergoers.”

Pending approval by the University System of Georgia’s Board of Regents, Rodriguez is hopeful that the facility will also allow for a greater collaboration with Georgia Gwinnett College — Aurora’s educational partner for the past 11 years. Many of Aurora’s administrative, technical and backstage interns are GGC students.

A view from the courthouse in downtown Lawrenceville of the new performing arts center.

“When we first came to Lawrenceville and knew a college was going to open, we said it would be so great if we could be a college town,” Pence says “Anthony went to UGA, and it’s always bustling up there. We do want vibrant people here, to be able to train the next generation of leaders so we can be the next Athens, Georgia.”

When Pence and Rodriguez put out a call for patrons and fans to show up for the final City Council vote wearing red shirts as a show of support, a large crowd filled the meeting room. “We went at 6:30 p.m. to welcome people, and when we hit the door, the room was full,” says Pence. “It was great to see so many people there excited. Some people came back over to Aurora to celebrate after.”

Lisa Sherman, the City of Lawrenceville’s chief communications officer, feels the new arts center will be huge for the area. “We have two major economic impact generators in our community — education and the arts — two industries we are trying to grow,” she says. “This expanding performing arts center will bring those together — education space for classes and expanded opportunities to bring professional theater to a community that has been embracing it for the last decade. We believe this will truly have a profound impact. We are the county seat of Gwinnett, and Gwinnett is a major economic engine for the state of Georgia as well as metro Atlanta.”

As city manager, Chuck Warbington has been aware of the discussion of a new arts center for a while. He’s been in his job for three years and says the entire community helped shape this initiative. Tesidents and business owners offered input and had strong ideas of what they wanted to see.

“They wanted it to be traditional, not modern looking, and not overshadow the courthouse,” says Warbington. “So we took great strides in making the architectural view of it look like it fits into downtown.”

He doesn’t expect any major changes. “It will be just like we have been operating the last 10 years. We have an agreement; Aurora has so many goals and shows they have to perform, and they have to do a lot of community projects with schools in addition to their professional shows. The only difference is that it will just be bigger.”

While the expansion is a major professional coup for Aurora Theatre, it’s also one that means a lot to Rodriguez and Pence personally.

“We can truly make this a place that lives on well past the time Ann-Carol and I are gone, that is part and parcel of our community and will reflect our community the way we have wanted it to,” says Rodriguez. “It is a testament to all the artists we’ve worked with before to be able to give them a richer palate to work with.”