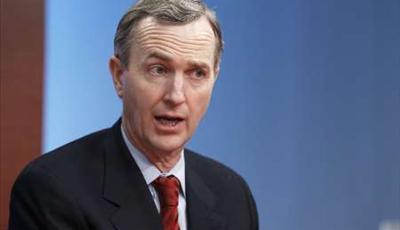 A major player from the hotel management industry will now head the board of a major symphony orchestra. Jim Abrahamson, president and chief operating officer of Interstate Hotels and Resorts, has been elected chairman of the Atlanta Symphony board, the orchestra announced Tuesday evening.

He replaces Ben Johnson, an attorney who had held the chairmanship since 2008. Johnson, who will rotate back onto the main ASO board, will likely be remembered for having steadied the organization after the departure of President Allison Vulgamore and for having helped hire Stanley Romanstein as her replacement.

In a prepared statement, Romanstein was quoted as saying, “All of us at the Atlanta Symphony Orchestra are so pleased to have Jim Abrahamson as our new chairman. Jim will bring his passion for this orchestra to the board room. While we still face challenges in this economy, we continue to look ahead with focus, confidence and excitement.” 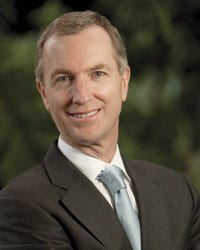 Until last month, Abrahamson (at left) was president of the Americas branch of the world’s largest hotel management firm, InterContinental Hotel Group, which operates tens of thousands of hotels in North and South America, including the Holiday Inn chain. In his new job with Interstate Hotels and Resorts, he will oversee 334 hotels in nine countries. By the end of the year, his role will be upgraded to Interstate’s chief executive officer. Perhaps significantly, Interstate is making inroads into China. Since last year, the management firm has been co-owned by Jin Jiang Hotels, among China’s largest hotel operators and developers.

When Abrahamson’s move from InterContinental to Interstate was announced in June, a business analyst told the London Evening Standard newspaper, “He’ll be a bigger fish in a smaller pool.”

In the statement announcing his ASO chairmanship, Abrahamson said, “This great orchestra is both nationally recognized and locally connected. I look forward to continuing the vision of this institution to make a positive and lasting impact on the lives of people in this community through our art, artistry and education programs.” Among other industry and community roles, Abrahamson is on the executive committee of the Atlanta Chamber of Commerce.