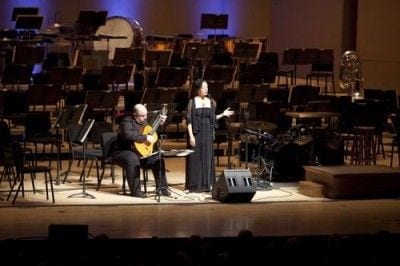 ASO and Luciana Souza in “Tangos, Fados and Dance”

Although the Atlanta Symphony Orchestra’s two-week festival featuring the music, dance, and culture of South America was monstrously overshadowed by a single piece for cello and orchestra — Osvaldo Golijov’s “Azul” — that is no rap on the festival itself, which traversed worlds of unfamiliar terrain with stylish charm and quicksilver rhythmic arabesques not often encountered this far north.

The dancing began tamely — nice, but we had seen it before — but gradually it became more intense and heated, and by the third and last tango — fueled by Gerardo Rodriguez’s sultry “La Cumparsita” — the steps had become impossibly complex and entrancingly sexy, and at the last dramatic embrace the audience exploded with applause.

Souza’s refreshingly direct, beguiling singing was initially lost in thundering orchestral accompaniment that a seasoned Wagner singer would have had trouble blowtorching through, and so the tribute to composer Antonio Carlos Jobim was affecting but not quite airborne. That changed when Souza and guitarist Scott Tennant later took the stage alone and, in a darkened setting that seemed intimate even though it clearly was not, exquisitely dispatched three lovely songs: Golijov’s “Lua Descolorida,” Ramirez and Luna’s “Alfonsina y el Mar,” and Simon Diaz’s Tonada de la Luna Llena.” (Photo by Jeff Roffman.)

The most obscure entry on the program had to be Columbian composer Santos Cifuentes’s “Scherzo Sobre Aires Tropicales,” an orchestral composition that affects Tchaikovsky’s style in every particular except rhythm, which swings with a deep southern accent; a learned fugue then pops out of nowhere and ends the piece hilariously. Harth-Bedoya found this jewel languishing in a library, and it’s a unique treat to hear. Blas Galindo’s “Sones de Mariachi” transforms the orchestra into a gigantic mariachi band playing famously popular tunes whose bouquet reeks of cactus and soil and Mexican wildflowers.

Harth-Bedoya and the ASO wound up Silvestre Revueltas’s fearsome “Sensemaya” tightly, and if its riotous climax lacked the savagery this piece needs for full effect, it was good to hear a composition more talked about than programmed. The only dud in the bunch was a trite arrangement of Ernesto Lecuona’s once-famous piano warhorse, “Malaguena,” which sounded in its overblown orchestral garb like a Hollywood movie score straining unconvincingly for effect.

The program ended with a bang. Ginastera’s “Four Dances from Estancia,” a 1941 ballet limning a day in the life of an Argentine ranch, has enough sustaining power to claim rapt attention without the additional dimension of dance, except for the meandering slow movement. Harth-Bedoya conducted it with precision and jolting elan.