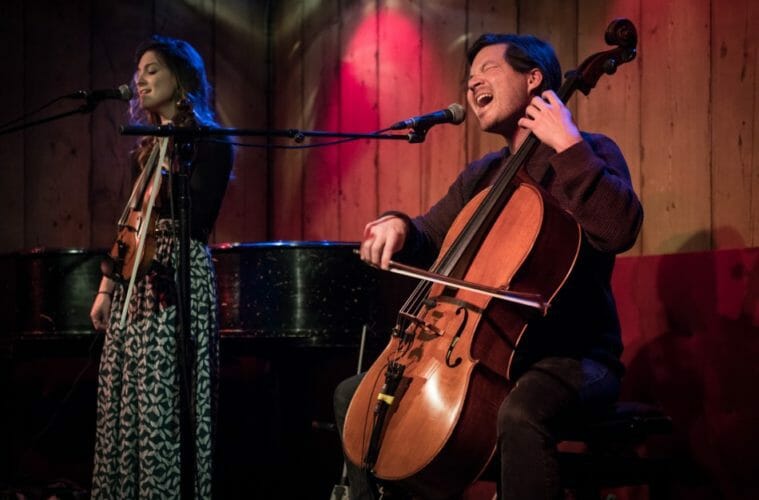 Are you missing all the splash, flash and panache of the recently concluded Tokyo Olympic Games? Here’s one way to keep that metaphorical torch relay going. In homage to the apex competition, husband-wife duo Takénobu covered a 1982 J-pop New Wave hit by Haruomi Hosono. It provides a tongue-in-cheek take on delusions of athletic grandeur that some of us may feel while watching a gravity-defying floor routine from our couches. The longing, as Radiohead once sang, to be “fitter, happier, more productive.”

The moniker Takénobu comes from the middle name of cellist and singer Nick Takenobu Ogawa. Loosely translated from Japanese, it means “iron will.” Ogawa began studying Suzuki violin at the age of three, went to Haverford College, and has been a professional musician for over a decade.

“First, I wanted to be a rock star or something, but now I’m accepting that I’m doing something, you know, a bit more tame than that,” he quipped during a 2017 GPB interview. He also composes music for film and TV, lending his cinematic soundscapes to the Netflix films Still and 42 Grams, the podcast Invisibilia, and more.

Ogawa met his now-wife, violinist and singer Kathryn Koch, in 2017. As a freelance musician, Koch has performed in various venues and with different artists, ranging from the Atlanta Symphony Orchestra and The Atlanta Opera to Michael Bublé, Josh Groban, Disturbed, Kishi Bashi and Kygo. They joined forces initially for the sake of musical collaboration, embarked on a tour in 2018, put out an album together, and, well, the romantic sparks flew like Michael Phelps racing a shark. As a musical power couple, Ogawa and Koch have been going for the gold ever since.

On August 6, Kibi James officially reissued the band’s acclaimed debut EP Azucár which, when originally released in the fall of 2019, landed a spot on our best albums of the year. The band first came together in 2018 as students at Georgia State and began building a faithful following in Atlanta’s underground alternative scene.

The album, which seamlessly blended innovative elements of composition along with English and Spanish lyrics, has reemerged into a forever-changed, post-pandemic world with a brand new music video — hopefully one of many. And it’s getting a first-ever “physical release,” including the option to purchase an actual cassette (!) from the “Virginia/Brooklyn-based” label Citrus City Records.

When asked how they came up with the band name, the members say they all woke up one morning, were recounting their dreams to each other, and realized the phrase “Kibi James” had appeared in all four of their dreams.

Let’s all take a breath for a moment and recognize the powerhouse that was Eartha Kitt — in life, in the arts, in social justice. The singer-dancer-actor-activist was the best Catwoman Gotham’s ever seen. She taught James Dean how to ballet. She prompted Orson Welles to declare her the “most exciting woman in the world.” She gave the Emperor’s New Groove its actual groove.

So, for our Vintage Track of the Week, it’s an honor and a privilege to have Ms. Kitt pay Atlanta a visit in song form, even if only to lament how miserable it feels to be here. “Up at Five Points talking Daddy an’ me,” the deceptively jaunty tune goes. “Just one square away from old Peachtree . . . In Atlanta, six long months to do the grind, the Georgia grind. Wonder if he’s missing all he left behind . . . Auburn Avenue is where I’ll go to lose those AT-L-A-N-T-A Blues.”

The story behind this rendition of the W.C. Handy-penned song takes us on a ride much like the train trip referenced in the song — vague on details yet compelling. The Father of the Blues wrote this tune in the early 1920s, in fond memory of a concert he gave to thousands in Atlanta back in 1916. Kitt recorded this version for her role in the 1958 Handy biographical film, St. Louis Blues. The movie debuted the same year Handy died, meaning that while he consulted on it, he never lived to see the finished product.

It features an absolutely jaw-dropping cast, headed by Nat King Cole in his only Hollywood role as Handy, with support from none other than Cab Calloway, Ruby Dee, Pearl Bailey, Mahalia Jackson, Ella Fitzgerald (as herself) and, of course, Ms. Kitt, who portrays a fictional singer with perhaps one of the best potential drag names of all time: Gogo Germaine.