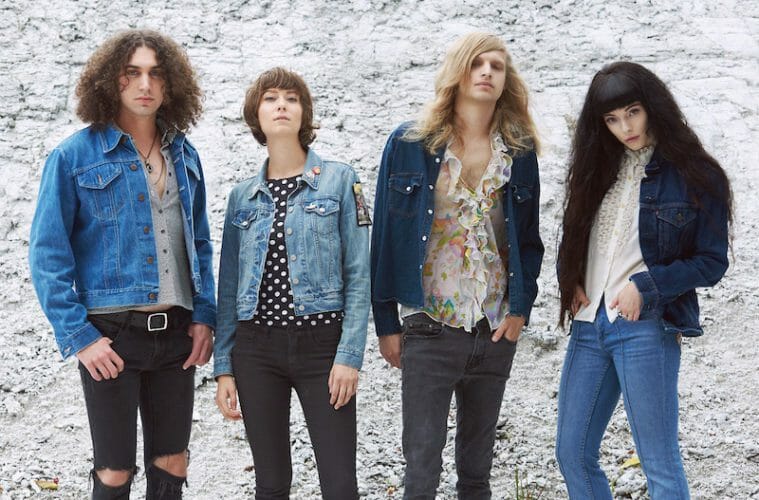 This release from Atlanta’s best “vampire glam” rockers, who have been recording music more or less since 2013, is the first since their acclaimed full-length album Love Potions debuted right at the cusp of the pandemic last year.

Starbenders lead singer Kimi Shelter has drawn eerily accurate comparisons to Stevie Nicks, Iggy Pop and Joan Jett. Bassist Aaron Lecesne was Shelter’s best friend, recruited first to the ‘Benders. The final two members, guitarist Kriss Tokali and drummer Emily Moon arrived by way of a house party and Craigslist. But to watch them perform together, you’d think they go back together at least a few lifetimes.

The lyrics about how “nobody believes little girls with proof,” paired with metallic percussion that sounds like a music box, allude to something darker. Still, ultimately, this feels like an empowerment anthem — a release of cathartic anger.

Starbenders famously uses their live performances often to raise money and awareness for a variety of causes through their shows, having played benefits for Children of the Night, My Sisters House, Open Door Inc., Girls Rock Camp, and Lost-n-Found. Check out our 2017 interview with them here.

Like the Ceti eels in Star Trek: The Wrath of Khan, it’s impossible to get this earworm out of your brain once it has crawled its way in there. But that’s okay, since after a year-and-a-half of sluggishly staving off panic on the couch at home, perhaps we’re better off by falling under the movement-conscious, peppy influence of 3D The Boss, the self-dubbed “health and fitness pop trio.”.

With offerings listed on their website for cardio concerts at corporate events, dance “team building,” and health and wellness keynotes, 3D The Boss is not your typical outfit. Members include veteran jazz singer, actor and lifestyle coach C. Lei, personal trainer, fitness choreographer and also lifestyle coach Day Adeogba and bassist and (you guessed it) lifestyle coach Donna Hawkins.

Grab your dusty volumes of Shakespeare, don your old timey-est garb, and head out into the woods to purge your pandemic woes. At least, that’s how the searing lyrics of singer-songwriter-composer-teacher Monica Arrington, aka Nerdkween, might make you feel. Funny enough, though, this is our Vintage Track of the Week, having been released originally more than a decade ago, on the 2010 album profitandloss.

Earlier in her 20-year career, Arrington was described as “reminiscent of PJ Harvey and early Liz Phair.” She began self-releasing cassette tape demos in 2000 and released her debut full-length album Synergy through Atlanta label Stickfigure Records in 2008.

She holds a bachelor’s degree in music from Auburn University and completed post-baccalaureate studies in music at Georgia State University and graduate studies in teaching at Western Governors University. She has been a certified teacher since 2007 and plays piano, guitar, and ukulele. In a New Year’s Day post on her Instagram, Monica noted that 2020 wasn’t a total wash, citing such “wins” for the year as more sleep, more reading, and more time with her cat. Hopefully 2021 may bring forth more musical gems as well.