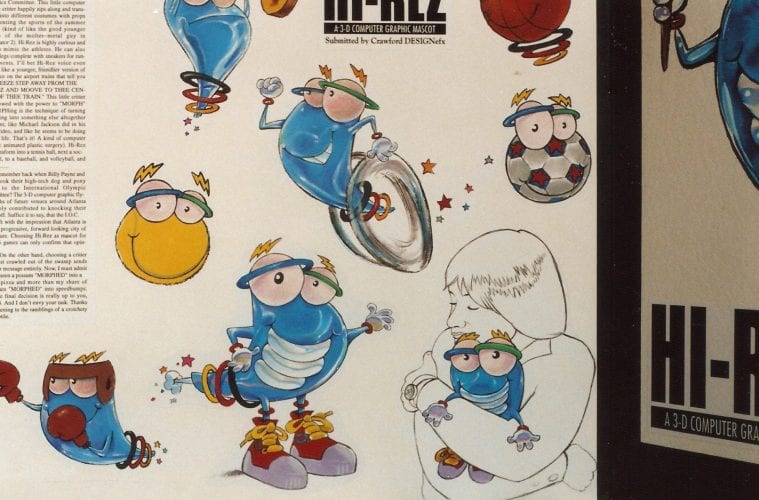 Atlanta Remembers the Cultural Olympiad: The man behind Izzy comes clean about what wuz it

The man behind the 1996 Olympics mascot doesn’t include the creation on his demo reel or résumé. John Ryan’s not ashamed, far from it. His reasoning for excluding what some may call the achievement of a lifetime, essentially designing the visual icon to go with the world’s biggest sporting event, is simple: it’s not his vision.

“People ask, ‘Why don’t you have this on your résumé? Why isn’t it something you’re proud of?’” Ryan told ArtsATL. “It’s like, I designed it, they bought it, and it’s the classic ‘you buy it, you break it,’ and they got to break it. It was their toy.”

Ryan’s pegged as the guy behind Whatizit aka Izzy aka one of the more polarizing mascots to emerge in the last 20 years. As the animation director at DESIGNefx, the firm that won the Atlanta Committee for the Olympic Games’ (ACOG) nationwide competition to design the mascot for the 1996 games, he’s often seen as the creative fall guy.

After 18 years in St. Louis, Ryan and his family arrived in Atlanta in 1991. He was drawn to the city’s welcoming vibe to artists. Designing the Olympic mascot was initially seen as a dream gig, and both sides — DESIGNefx and ACOG — started off on the same page. Twenty years later, Ryan, who now runs animation hub Dagnabit!, spoke to ArtsATL about the initial concept, having his vision hijacked and dealing with the backlash.

ArtsATL: Run me through how you and your team got linked to the mascot competition and why you ultimately decided to go through with taking part?

John Ryan: At the time The Atlanta Constitution and The Atlanta Journal were the morning and evening papers and the Journal got wind of a need for a mascot and decided to kind of take it upon themselves to invite everybody to submit mascot designs to them and they had conversations with the Olympic Committee and said, “Can we present these to you? Will you consider them?” They looked at the publicity as something that was a good idea, but as it stood there was an effort by ACOG to reach out to specific designers and design firms all over the country. I think we were the only local firm or one of two or three. It was a formal invitation that was given to 26 different companies. Apparently 10 of them responded, so we were one of 10 who responded to seriously approach this and put forth our concept. We were told the other 16 basically said, “You’re not going to pay us. You would pay an architect for early development. This is not the way business is done.” So, there was a good deal of flak initially from the very beginning.

Ryan: They made the format for submitting designs very self-contained. It was designed on the model of a high school science fair competition where you had the tri-panel boards that folded out and were self-standing. So on each of the panels you had the opportunity to present your designs and the rationale behind the creation of your design. No one was allowed to pitch the concept in person. It essentially had to be portable, something that was delivered to them, they set it up in a room and they’re able to ponder it and make their decision from that.

ArtsATL: And what was the rationale behind your concept?

Ryan: It was a case of just trying to break the mold and help them get accustomed to the concept of doing something different because Atlanta’s a little different. It was becoming known as “Silicon Valley East” at the time. What we were trying to propose was something that actually had a vision to it, and was pushing the very technology of CGI animation. It was just at the early stages of bringing characters in CGI animation. We thought this is in our bandwagon, this is something we do very well and it speaks to the technology that we want to make appear very attractive, and actually cast a nice glow on Atlanta.

ArtsATL: As an artist leading a team of artists did you feel like your vision was being well-received by the committee?

Ryan: Initially, it was very flattering. We realized this is brave. The interesting part for us was there was a certain ownership because for the project we named it “Hi-Rez,” which was a term that wasn’t in general public acceptance at the time because people were concerned about that, like we were saying the graphics everyone else was using was low-res. There’s so much that’s changed in the 24 years since we got involved with the creation of the mascot. We felt encouraged that they were adopting it, really got it. We were seeing a lot wincing from the lieutenants, the lower echelon that kind of managed things. The guys at the top really seemed to get it get it, and really seemed excited about it.

Ryan: Well from our brief at the very beginning of the design the mission was to, per the ACOG’s request, engage the children of the world. This wasn’t about engaging Mike Luckovich or Colin Campbell at the newspaper or any of the adults in the room. Our goal was, “How do we engage kids?”

ArtsATL: So talk about the initial design.

Ryan: The basic design is a simple form. It’s teardrop-shaped because a teardrop can convey emotion while standing still. It’s a shape that people use in automobile design and aerodynamics. It’s something provocative, it’s something you can relate to. Then [it was] adding enough formation to it to give it a personality, adding the eyeballs, adding the little touches. The intention was to turn it into a toy, something that people were inspired to play with, and kids got that right away.

He was designed without legs and basically popped on sneakers when he needed them. That was one of things that got immediately engaged by the committee and they were like, “Oh, we really like the sneakers, he has to have the sneakers on all the time. He has to have legs.” It was like, OK, well now you’re dictating the design. Our relationship with the committee was not sustainable. It got to the point where they basically looked at us and said, “We got this. We don’t need you guys anymore.”

Ryan: While we were still working with our team trying to face the next stage that we knew was coming they walked into the office and said, “We’ve got these drawings from . . . ” They never named who it was — clearly someone’s mouth-breathing nephew who had taken an art class. His drawings of Izzy, they thought, were more Disney-like, and that was the sort of stuff you were seeing in merchandise in ’94-’95. It was really ugly as sin, and that’s the stuff that people started to see as the character. When they walked in and basically proclaimed, “This is the direction we’re going in,” we realized they’re letting us off the hook. They’re probably the client from hell. This could overshadow any reputation that we had that was positive.

ArtsATL: How frustrating was that?

Ryan: You try and be the voice of reason and I got a lot of finger-wagging in my face like, “You don’t say anything when [Atlanta Olympics CEO] Billy Payne’s in the meeting.” I found myself being ushered out and my friend went in as the designer who could go in and shut up [laughs].

ArtsATL: Is it fair to compare Izzy to the backlash over Jar Jar Binks in the Star Wars prequels? I interviewed Ahmed Best who played him, and he said George Lucas wanted to create the character for kids and a new generation of fans and it backfired.

Ryan: As the public, you don’t have to have to be responsible to any of that. You can have an opinion and when you look around, everyone is having the same opinion that corroborates it. The fact people got so into it, and became such muckrakers it was like, “Just shut it down people. What the heck?!”

ArtsATL: It sounds like the classic case of the client deciding they know more than the artist they hired. Is that accurate?

Ryan: Very accurate. If you scratch the surface and interviewed architects that worked on construction in the city, you talk to graphic design firms who did the graphics, [and] you’d have the same story. They got paid more than we did. I basically got a bottle of wine and a really ugly tie with little Izzy characters all over it and the wine was from the Izzy Winery. It was not a memorable bottle of wine. That was my payment because that’s how people think of artists. They think, “Oh, you’re having so much fun doing what you do, you’re paid already.” We see that everywhere; big corporations just say, “Hey, let’s have a contest and have them do our logo.” These are people who went to school and studied and should be paid [laughs].

ArtsATL: Wait, so you guys never got paid?

Ryan: You know I worked 9-5 for Crawford Communications and they were very generous and gave me a nice little bonus. They looked at it like, “this is prestigious; this is lovely.” The Olympic Committee was very much into let’s just get everyone to do this for the pride of the event. You mentioned George Lucas, the Olympic Committee were touring Skywalker Ranch with George Lucas and there was a handler kind of handling the tour. There was a point where one of the members of the committee started to make the case to George that it would be good for his résumé to do something for the Atlanta Olympics and do a film with special effects. He didn’t get out the second sentence before they suddenly realized they were being ushered onto this path that led to the parking lot and George Lucas was no longer with them.  George didn’t need anything for his portfolio, but the fact that he even got that sort of treatment, it’s like, “Wow.”

ArtsATL: Do you feel like maybe you guys were just ahead of your time?

Ryan: The stuff we know now, if we were all on email, all sending JPEGs to each other, if we were at this level then, it would have been much easier for them to understand I guess [laughs]. It was out of their realm.