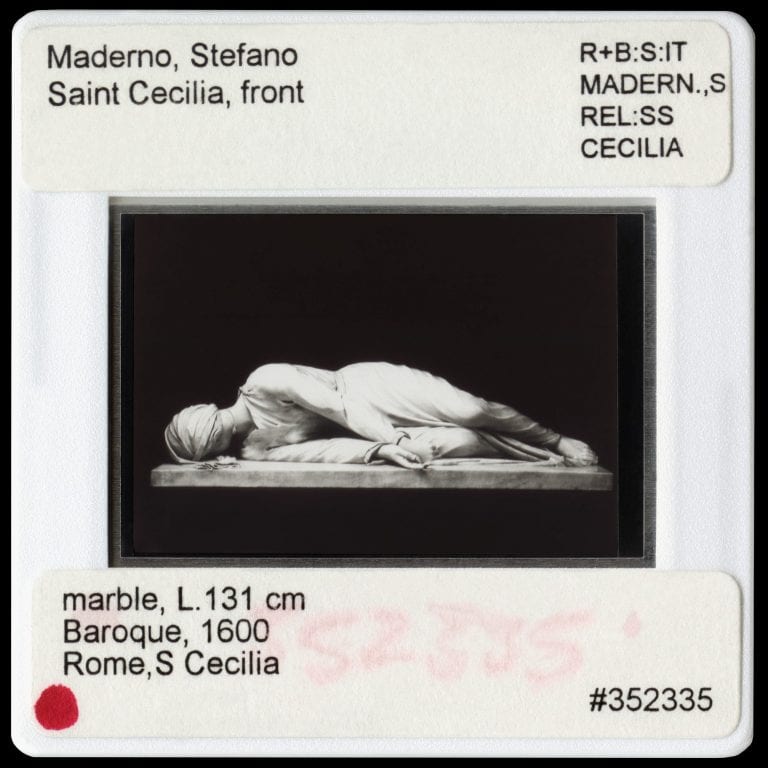 For those who studied art history before the adoption of digital images in the classroom, Vesna Pavlović’s Falls and Folds, might be a nostalgic reminder of bygone days or a painful reminder of long lectures, flashcards and tests. (Art history is not, I suppose, everyone’s favorite subject.)

Falls and Folds consists of images of images, or more precisely, enlarged copies of didactic art history slides that were once the staple of art history courses. Pavlović’s reproductions are printed copies (some endura metallic color prints, others archival pigment prints). Some appear on metal stands so that they stand out from the wall and project shadows onto the wall behind them; others are framed and hang on the wall.

For those unfamiliar with art history slides, they are small, roughly square objects that could be viewed either through a slide carousel or a light table. In art history courses of the past, a lecturer would dim the lights, load the carousel into a projector which produced a steady, lulling buzz once illuminated, and the images would be projected onto a screen.  Pavlović re-creates this scenario in Whitespace’s larger gallery room for Fall and Folds. A Kodak carousel rotates, projecting 80 different images of works of art onto a draped piece of translucent projection screen. On one side of the plastic a fairly faithful reproduction appears; on the other side, a hazy and inaccurate version shows through the folded layers of screen. This disparity seems to be the crux of Pavlović’s show.

To explore the concerns that seem most crucial, I’ll focus on two of Pavlović’s prints, “R+B: PTG: IT: TITIAN PORT: FILIPPO ARCHINTO” and “Maderno, Stefano, Saint Cecilia, Front.”  The long and esoteric title “R+B: PTG: IT: TITIAN PORT: FILIPPO ARCHINTO”  is lifted from the text running along the slide’s left side, a label printed in I-mean-business typewriter lettering that identifies the painting and its maker. At its center is the reproduced image, a copy of Titian’s beautiful and strange portrait of a 16th-century Italian cleric who wielded significant political power. Perhaps the most striking and unexpected aspects of the portrait is a translucent curtain that bisects the man’s staring right eye so as to create a disconcerting effect.

Pavlović’s theme being what it is, the choice of Titian’s portrait as a subject is ideal.  Fabric features prominently in Titian’s painting, so much so that it becomes part of the content of the work (one theory is that the sheer barrier of cloth alludes to troubles the man faced later in his life). As for Pavlović’s appropriation: the diaphanous curtain is a lot like a slide. It’s translucent and filmy; it becomes transformed when illuminated by light. This is precisely what happens on the adjacent wall, on which a silver, pleated curtain hangs and is — at least during daytime — illuminated by sunlight from windows in the gallery’s space. On top of the curtain, another large reproduction of a slide hangs. This one, “Maderno, Stefano, Saint Cecilia, Front,” pictures Italian baroque sculptor Stefano Maderno’s “Saint Cecilia” floating on a field of unmodulated black, artificially decontextualized for study.

As is the case with Pavlović’s selection of Titian’s portrait, the selection of a slide showing Maderno’s “Saint Cecilia” is another shrewd act of appropriation. Maderno’s sculpture shows the body of a saint of the fourth century who was disinterred in the late 16th century. Her body is recumbent; her arms folded in front of her. Her head faces downward and is wrapped in a pall. It shows her body as it appeared when exhumed, mystically inviolate — or so the story goes. Like Titian’s painting, fabric plays an important part. The sculptor’s depiction of drapery transcends its materiality; there’s something enigmatic and peculiar about the woman’s shrouded face. As a portrait, it denies the viewer the most expected aspect of figurative sculpture, the face.

In the context of this show, “Maderno, Stefano, Saint Cecilia, Front” thematizes the basic concerns at stake with slides and images in general. Slides are designed so that the text would be hidden once the slide was illuminated and projected — often larger-than-life into a dark, hushed room filled with the hum of the projector — and the illusion, almost cinematic, created. It’s easy to expect slides and reproductions to endure over time, as unchanged and unchanging as the mystical body of the saint. Of course slides do fade over time, just as, in real time the actual object undergoes changes itself, some as small as minor deterioration, some as significant as major conservation. The slide becomes an image with a life of its own. Just as the projected images of Falls and Folds appear simultaneously in focus and hopelessly blurred, so to do does the reproduction and its original diverge.

Perhaps it’s useful to return to “R+B: PTG: IT: TITIAN PORT: FILIPPO ARCHINTO,” and the Titian’s painted curtain. Already, I’ve suggested it’s a lot like a slide, but it’s worth noting that the sheer fabric isn’t merely fabric through which light passes and projects an image, but it’s also a barrier of sorts, reminding us of the separateness of the represented image, of its opacity, even. It strikes me, and I imagine many viewers, that Pavlović’s printed images don’t do that one thing that a slide always did: they don’t glow. Indeed, there’s a sense of sterility to the images that might be off-putting but maybe it’s the point. These now-obsolete objects are now relics themselves, valued mostly for their vintage, anachronistic charm. This is a strange albeit perfect fate. Slides are now part of the fabric of the past, that opaque and impenetrable era that they once were designed to illuminate.