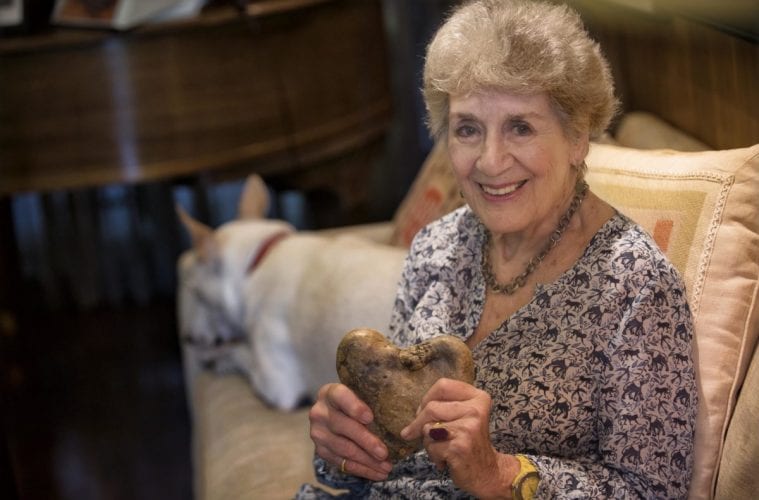 Lucinda Bunnen sometimes uses the term “hunter-gatherer” to describe herself as a photographer. But a visit to her home in Buckhead reveals that she hunts and gathers far more than just great images.

“I love finding things that have a history and a past,” she says of her vast collections of strange and fascinating objects. “I don’t look at glitzy, fine things. I’m interested in nature, and basically, I just like junk. Most of what I have cost me nothing. I either found it on the ground, or I found it in some antiques shop for practically nothing, or it’s broken.” 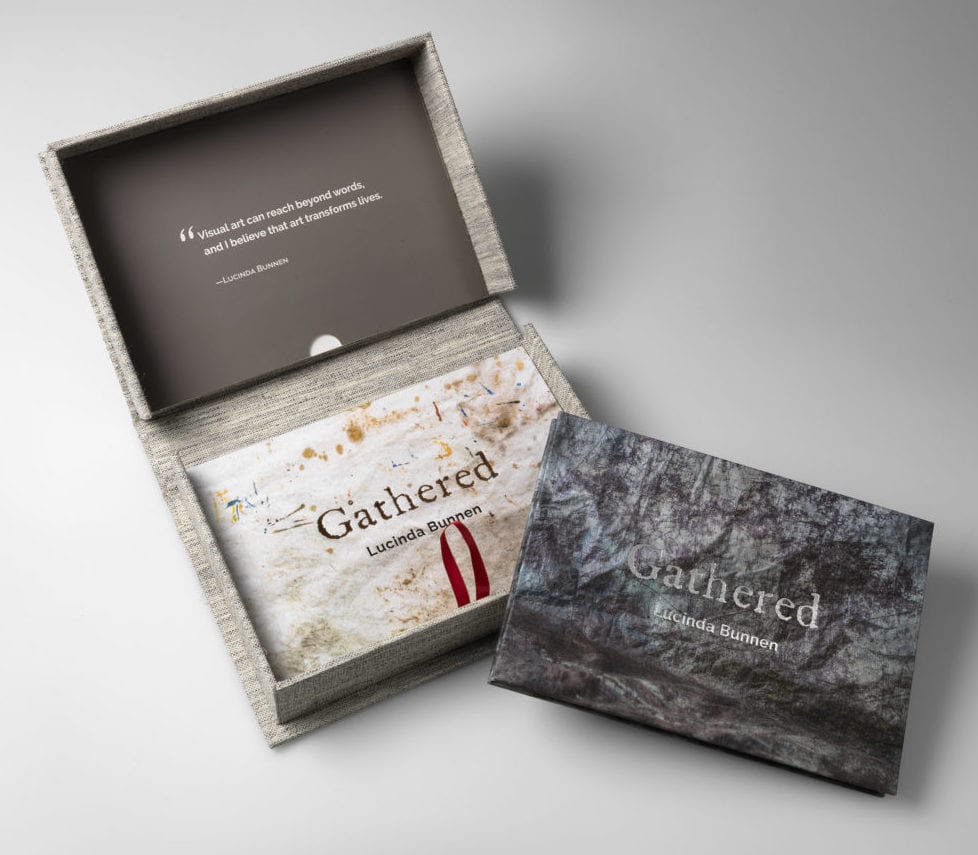 Bunnen’s respect for the unusual, the overlooked and the underappreciated is evident throughout her new book Gathered, her seventh. The twin volumes of clothbound accordion books encased in their own box are art objects unto themselves, as quirky and original as the pieces photographed within. Whether it’s a hammer made by her son Robb when he was in high school, a Donald Locke bull accessorized with Bunnen’s red tasseled scarf, a pipe sculpture made by a plumber in Milledgeville or a collection of 19th-century marbles excavated from the site of Centennial Olympic Park, Bunnen sees beauty in asymmetry, imperfection, authenticity and the unrefined.

Her restless energy keeps her in constant motion. An instinctive artist, she seems baffled by questions about her creative process, replying to inquiries about her way of thinking with: “I don’t know what goes on in my brain, I just know it works differently.” Whether reading people or the lay of the land, her situational awareness is acute. She can be patient and observant when warranted, but if she has to break into a sprint in pursuit of something that catches her eye, she will.

“My husband and I were walking on a beach in Pensacola when these nuns in their black habits came out of nowhere,” she says of her very first photograph, snapped during a family vacation in 1970. “My God, when you see black habits on a white beach, why wouldn’t you take a picture? I chased them, and my husband chased me saying, ‘You can’t do that!’ But I’m bad. I’m not afraid to approach strangers and ask if I can take their pictures.”

Bunnen’s sense of curiosity and discerning eye have served her well in other areas, too. She is often decades ahead of the crowd as an art collector. She acquired Atlanta artist Radcliffe Bailey’s mixed-media paintings before his name reached bold-face status in the art world. She invested in a then-unknown artist named Sally Mann, “before her prices went out the wazoo,” as Bunnen puts it. She purchased Nicholas Nixon’s entire collection of The Brown Sisters prints long before the series received a 2014 Museum of Modern Art exhibition and worldwide acclaim. (The prints will be featured at the High Museum when the reinstallation and renovation of the museum’s collection galleries is completed later this year.) A founding member of Nexus, the first gallery in Atlanta to feature works by emerging photographers, she also helped launch the High’s photography collection, which now contains over 650 pieces, and endowed the museum’s Lucinda Weil Bunnen Photography Gallery in 2014.

The first item she photographed for Gathered, an heirloom that once belonged to her grandmother, looks like a doll at first glance, but closer inspection reveals it’s actually a mesh change purse. Her collection of rocks, sea glass and natural materials that are shaped like hearts betray her tender side (she claims that she’s never found anything heart-shaped on the property of someone who wasn’t nice). And one of her favorite finds, another doll, was excavated from the remains of a house that caught fire in her neighborhood a few years ago. That same excursion also yielded a box of photographic paper, which Bunnen subsequently printed on, and prizes, for its charred edges.

Which begs the question: What possessed her to explore the scorched wreckage on her own?

“I walked into that shell of a burned out house for the same reason I do everything,” she says. “I’m curious. I want to see what’s around the corner. I never think about it. I just keep going forward.” 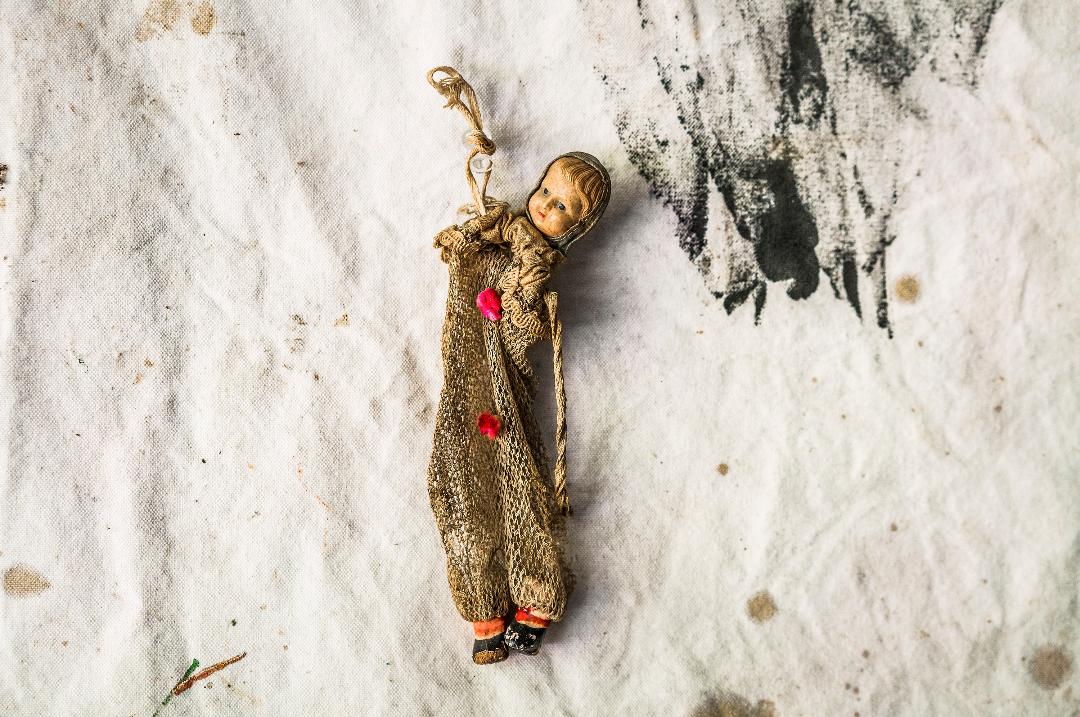 A change purse in the shape of a doll, an heirloom that once belonged to Bunnen’s grandmother, is just one of the many unusual objects featured in the new book. (Courtesy the artist)

Fortunately, Barbara Griffin, who edited Gathered, made the case that there was value in looking back from time to time. The hunter-gatherer, however, was not so easily convinced.

“When Barbara called and said she thought it was time to do a retrospective of my pictures, I said, ‘I just started a new project. I don’t want to think about a retrospective right now. I’m thinking about what I’m doing,’” says Bunnen. So Griffin met Bunnen where she was — in the shade of her garage, photographing her eclectic collection of beloved objects against a pair of old drop cloths, one dark and one light, that she’d salvaged from a storage space.

As with everything Bunnen has been gathering for the last 60 years, the new book came together gradually, organically, in bits and pieces. And in the end, Bunnen says she hopes the new collection will show how even the most humble objects can tell stories and change perspectives, if only we take the time to let them.

Images from Lucinda Bunnen’s Gathered will be shown at Mason Fine Art from September 13 through October 27. Signed and numbered editions of the book are available for purchase on the artist’s website.