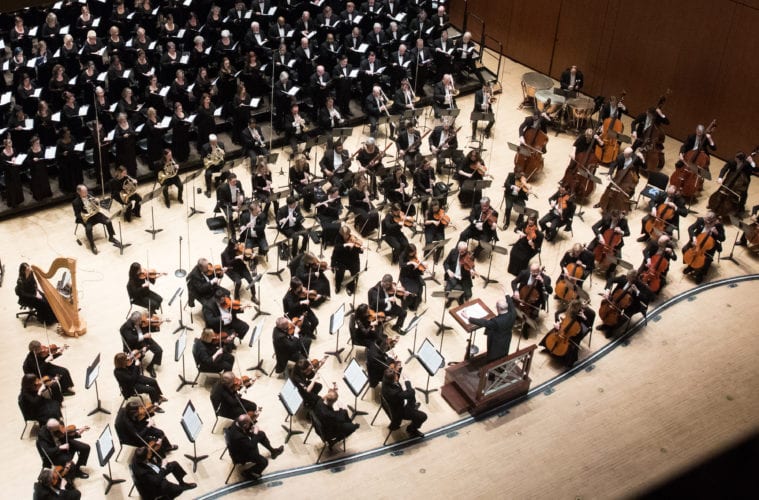 When attending a performance by a given ensemble, it is often with the intention of hearing how a collection of top-tier instrumentalists perceive and express the classics. Such a lens was ideal for evaluating the Atlanta Symphony Orchestra’s performance of Mozart’s “Jupiter” (Symphony No. 41 in C-Major, K. 551) and Verdi’s Quattro Pezzi Sacri (Four Sacred Pieces) on February 23.

How the ASO would interpret “Jupiter” was foremost in my mind when I took my seat. The Robert Shaw-conducted concert of Mozart’s Requiem remains my favorite performance of the masterwork, so it’s more than support for the home team that drew me into the audience. The Requiem sees Mozart at his most intensely German, giving himself over to the dark, ominous bombast stylistically associated with the region and later exemplified by Brahms and Wagner. “Jupiter,” on the other hand, is a study in sharp contrasts — there are bursts of brash darkness interspersed with passages of the kind of light playfulness that have always been Mozart’s signature.

The ASO’s take on “Jupiter” did not seem to reflect the piece’s turn-on-a-dime nature, instead resting largely in a comfortable middle zone. Much of this could be due to music director Robert Spano’s more conservative and fluid approach to his craft. A more impassioned conductor — Seiji Ozawa comes to mind — might have better captured the nature of the piece.

None of this is to say, however, that there were not moments of sheer brilliance in the ASO’s handling of “Jupiter.” Indeed, Spano’s approach played to great effect during the Andante Cantabile, where the billowing rise to thunderous intensity was well served in his hands. Similarly, the Menuetto Allegretto — perhaps the most well-known portion of “Jupiter” — received the enthusiasm it so richly deserves. Worthy of note is Concertmaster David Coucheron, whose passion for his performance was radiant and infectious.

Ultimately, it was Verdi’s Quattro Pezzi Sacri that proved to be the evening’s highest point by consistently moving and engaging throughout. Written in celebration of the composer’s deeply held Christian faith, Quattro Pezzi Sacri is meditative and soaring, thoughtful and passionate, but always with a keen regard for subtlety and texture, which Spano’s conducting delivers in spades. Given the space to more precisely and carefully develop his form, the conductor shines and commands with all the elegant mastery that the work demands. The voices of the ASO Chorus were transcendent and captivating. (Photos by Jeff Roffman)

Highest among the second half’s commendations should go to the ASO Chorus, whose gorgeous tones were sculpted beautifully by the venue’s acoustics par excellence. “Ave Maria” was a haunting moment of contemplative peace conveyed with all the stirring calmness of a solemn prayer. Joined throughout the piece by their instrument counterparts, the voices of the ASO Chorus were transcendent and captivating.

With regard to the instrumental realm, Verdi makes deft use of his woodwinds and brass, which in the ASO’s performance were perfectly balanced — neither too reserved nor too jarring. That the horns in particular could announce their presence without rupturing the delicate nature of the piece is a display of mastery indeed.

Quattro Pezzi Sacri is, at its compositional core, a deeply blended work that showcases Verdi’s capacity for tender, piercing melodies spread out across the epic grandeur of the symphony and choir. Of particular note from this standpoint is the Stabat Mater, which carries with it the kind of sorrowful majesty associated with Barber’s “Adagio for Strings.” It was in this moment of the evening that the ASO achieved transcendence by commanding not only the material but the hearts of the audience. By the end of the second half, there were even premature bursts of applause —  a fervent disregard for classical decorum that indicated much of the audience was moved.

If there was one drawback to the otherwise sublime second half, it was the inclusion of translated lyrics projected on a screen above the chorus. While this might be helpful in the narrative-driven world of opera, in the context of the evening, it felt like an unfortunate distraction.

In the highly interpretive world of the classics, the evening of February 23 showcased an array of tendencies within the ASO’s skill set, for the most part highlighting its many strengths. It was an evening that, in its finest moments, struck deep into the listener’s heart.