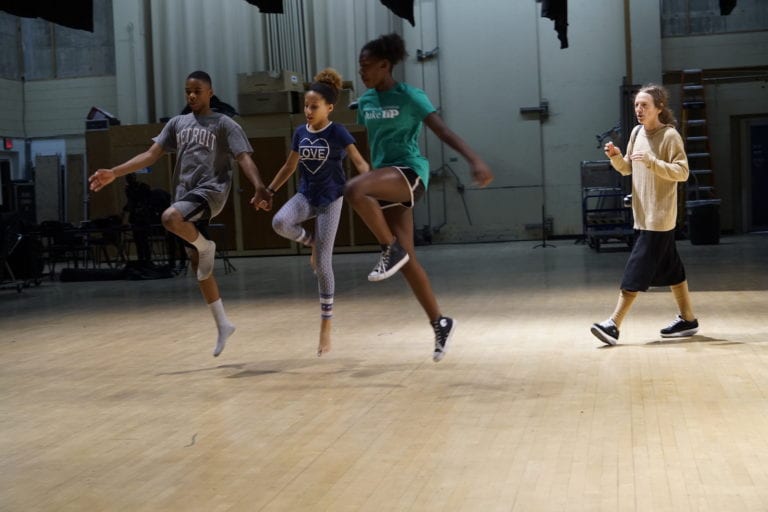 The Future is a Cultural Symphony: glo brings kids to ASO stage in Jump

On November 16, 2018, Lauri Stallings and the moving artists of glo began working with a group of grade schoolers at the Barack & Michelle Obama Academy in the Peoplestown neighborhood of Atlanta.

As the students filtered into the small cinder-block studio, chatting and cartwheeling through the door, they were advised by their dance teacher to “zip it.” In silence, Stallings gestured for them to come sit around her, and she reinforced the quiet by drawing her fingers across her mouth in a zipper action. Sitting cross-legged on the floor, she began with slow, deliberate movements: extending and bending her legs while her hands found the shape of a crown on her head. She turned the invisible crown around in her hands before giving it to the young girl seated in front of her. With wide eyes laser-focused on their strange guest, the children followed along with Stallings, repeating the movement phrase and adding on a little bit more each time, and before any words were spoken, they had already created something together.

Only then did Stallings see fit to introduce herself and glo and explain the reason for their visit: a collaboration with the Atlanta Symphony Orchestra called Jump.

One tiny hand reached up to be called on. “I think a culture symphony is the future.”

Receiving its premiere at Atlanta Symphony Hall on March 2, Jump is a new and unique collaboration for the Atlanta Symphony Orchestra, under the direction of maestro Robert Spano. Though Spano and Stallings have joined forces on several innovative productions, including 2017’s Orfeo, the scope of Jump is certainly the most epic yet.

The evening begins with Maurice Ravel’s Mother Goose, followed by Jump, the realization of an unfinished collaborative work between the late ASO composer-in-residence Stephen Paulus and librettist Joey Reiman. Reiman revived interest in the project following Paulus’ death in 2014, and with the help of Spano, Reiman has put together an all-star production team of collaborators. Their contributions include a new score drawing from Paulus’ catalogue by composer and arranger Robert Elhai, choreography from Stallings, projections from Adam Larsen and LED-lit wings for all of the children from sculptor Audrey Morrison. Spoken word artist Micha Brown, of Soul Food Cypher, will narrate Reiman’s libretto, a retelling of The Princess and the Frog with a coming-of-age twist for the princess.

Stallings aims for the movement artists of glo and more than 100 local school children to embody the hope and potential of this re-imagined fairy tale through Stallings’ signature physical sculptures, ribbon-like migrating patterns and what Stallings calls “hieroglyphs” or “dinosaurs” — gestures that pull from classical dance traditions.

The process with the children began back in July, when glo held a workshop onstage at Symphony Hall with about 10 students from Peachtree City Rising Star Middle School. Using “dancing voices and singing movement” — a phrase Stallings would come to repeat in many iterations at every school — they worked on developing a wildlife scene, centered around a pond, with bees and wildflowers and frogs. Each group worked with its own glo moving artist; the frogs crouched low with Mary Jane Pennington and worked on a super funky sequence of dance steps while the bees zigged and zagged, fingers fluttering, behind PhaeMonae Brooks, and the wildflowers felt their arms and spines drifting to and fro with Virginia Coleman. Time was given to notes but also to snacks. Feedback and suggestions were offered matter-of-factly to the students, just as in a professional dance company, and yet, the biggest question of all seemed to be, “Should we have a popsicle now or later?”

Over the last half of a year, glo has brought this wonder-filled, generative process to Avondale Estates LEAD homeschool co-op, DeKalb Elementary and the Tapestry Public Charter School in addition to the Barack & Michelle Obama Academy and Peachtree City Rising Star Middle School. Usually working in one-hour spurts (that seemed to be done almost as soon as they began), over a vast number of weeks, in schools that spanned the inner city and outer reaches of the metropolitan area, the space and time challenges of creating with so many youngsters was overwhelming. Yet most days, Stallings’ first words to any group of children were the same: “It is an honor and privilege to work with you today.”

A couple of weeks ago, on a Tuesday afternoon, at Avondale Estates LEAD homeschool co-op — which has the smallest group of students, most of whom are home-schooled and range in age from 8 to 10 — several children said what they thought of Stallings and this big opportunity to perform for an audience of 1,700 people.

“Yes, she never gets agitated.”

“She doesn’t get as angered as some adults I know.” (Guilty looks in the direction of a collection of parents present.)

“She really brought all of us together.”

“It’s amazing to think I have seen people onstage, and I never thought I would be up there myself.”

They became bored with sitting and talking just as Stallings arrived. And almost immediately, they were crushing imaginary crystals with their feet, building sculptures out of their bodies and counting sections of movement. Introducing some new music, Stallings asked them what they knew about hip-hop.

“There is a beat, and people are singing.”

“Some people are rapping, and some are dancing.”

“It’s using rhythm and beat instead of instruments.”

Stallings nodded vigorously, affirming aspects of all the answers until they arrived at a shared conclusion: Hip-hop, like dance, often uses the person as the instrument.

The next day, at DeKalb Elementary, Stallings was equally giddy with excitement for them to hear sections of Brown’s rap, mixed with classical orchestration, for the first time. As the largest group, numbering around 60, they gathered for a rehearsal in a sectioned-off area in their cafeteria. The rehearsal divided into groups, with four glo artists spreading out among them to review their parts before Stallings had them link it all in a run-through.

As Brown’s voice began over the speaker, a young boy spontaneously started dancing while waiting for his entrance. (His friend later explained, “That’s the ‘Orange Justice’ dance.”) A teacher ran interference, asking him to be still, in an effort to help Stallings maintain order of such a large group. But Stallings had seen just enough to become inspired. She rifled through her stack of notes, which mostly consist of “maps” that help her keep track of the myriad elements playing out onstage at once and the “leaps” between them, and found a place to work in a solo for the boy.

In these rehearsals, which seemed to function as pit stops on a long road, Stallings divided her attention equally between giving out rather nuanced and particular choreography and staying present to the almost uncontrollable twitches, wiggles and wobbles that bubbled out of the children’s bodies. “We are all movers,” she told me. “Some of us have just had more lessons.” As part of the glo oeuvre, which is heavy on works that embrace the community and invite audience participation, Jump, with its focus on the self-actualization of young people, is a logical leap for an artist like Stallings. Even still, the coordination of all these elements, for one single performance, is an inherently ambitious and risky proposition.

Once in the theater, students from the different schools will cross paths for the first time and share the stage with each other, glo, Brown and musicians from the ASO. The children will also all don wings. They will have to remember their entrances and exits and keep track of all of this choreography that has accumulated in short, weekly bursts.

In the final days of rehearsals at the schools, challenges beyond logistics appeared. More than once, Stallings lost the cool many children had attributed to her, raising her voice to be heard over loud voices, gossip, distractions and, sometimes, rolling eyes and bad attitudes. She reminded them that maestro Spano might not be as patient with this behavior when they met again in the theater.

Very few of the students had ever attended the symphony, and their bewildered facial expressions suggested that many of them had no frame of reference for this experience or Stallings’ warnings. They seemed to have no sense of what a maestro may or may not permit or why something like insincerity could confuse the audience. Even bigger perhaps, the students seemed to not have any idea why Stallings chose them, unruly as they were in this moment, to be in this work of art. And yet, thanks to this project and Stallings’ determination to put them on a stage, they were just a couple weeks away from knowing all of these things.

A little beaten, but undeterred, Stallings told the room, half of whom were munching on sandwiches glo brought: “There is no way for me to prepare you for the gift that’s ahead of you except to be here every week.” She went back to guiding a duet that had lost its origin of gentle connection. “Teach us how to bring our palms together, teach us how to be patient,” she chanted as they waltzed in a circle around the room.

Throughout the months, Stallings had to work against and with the entrenched power dynamics that exist between the students and authority figures in their lives. With near constant vocal affirmations, glo’s process walked the line between firm and loose. Choices were given — “How many body waves do you want to do?” and “Where do you want the arms?” and “Are the fingers bent or falling? Choir, let me know.” And the decisions, once made, were expected to be rigorously remembered and upheld.

Most rehearsals ended with everyone gathering in a meditative place, near prayer, in order to acknowledge their own agency, voice and responsibilities. At Avondale LEAD homeschool co-op, Stallings left the children with a task: “Our bodies want to express our dreams. Young choreographers, please dream about how you want to finish the work.” To close the last rehearsal at the Barack & Michelle Obama Academy, she invited the students to huddle together and take a knee with her. “Hold a warm space in your hands,” she said as they took a moment to reflect on their journey to this moment and what still lay ahead. “Find you, not what other people want you to be, just you.”

Back in July, students from Rising Star wrapped their workshop with a song. New scripts in hand, they weaved in and out among the glo artists in an informal walking pattern while singing Paulus’ “Hymn for America.” Stallings and glo encouraged and accompanied their voices. Tentative and searching at first, their harmony gained strength as they hovered around the last line, a lofty and grounding declaration of self: “We, your children everywhere.”