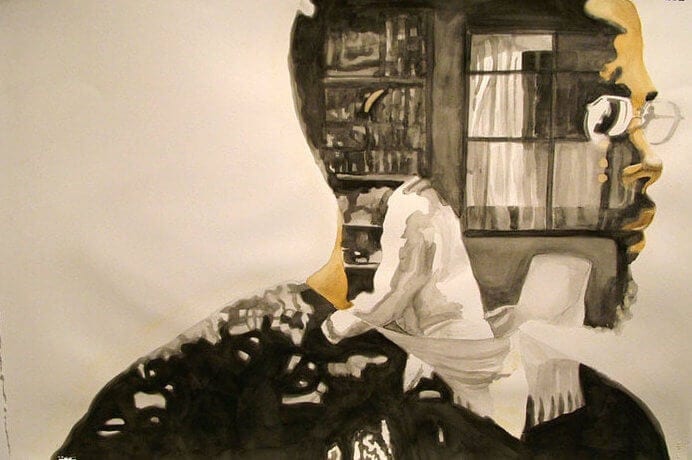 Acclaimed Atlanta artist and Morehouse College professor Charles Huntley Nelson Jr. passed away in 2009 at the tragically early age of 38 after a battle with stomach cancer, but he nonetheless left a lasting mark on the city.

“Nelson was a force on the Atlanta art scene,” Pecou told ArtsATL in advance of the opening. “As a result, his untimely passing sent shockwaves across the country. With his artwork, Charles was an astute and witty cultural commentator, [and] many of his themes are as relevant today as they were 20 years ago.”

“Nelson was equally adept at painting, drawing and video, and he put them all to work as a conceptual artist,” wrote ArtsATL founder Cathy Fox in her 2009 remembrance of the artist in the Atlanta Journal-Constitution. “The Morehouse College professor had garnered accolades for richly layered videos that drew from literature, film, popular culture, music and art history.”

The exhibition will present a small percentage of Nelson’s output, but it will attempt to mine his corpus to show his impact, Pecou says, and especially his influence on contemporary Atlanta-based artists today. “Charles’ impact on my own practice and career can never be understated or ignored, and I’m proud to help reintroduce him through this exhibition,” says Pecou. “When [Hammonds House Interim Executive Director] Leatrice Ellzy asked me to consider curating an exhibit for the 30th Anniversary season at Hammonds House, I knew immediately we needed to honor Charles and his work.”

The retrospective is also a significant moment in the history of the Hammonds House Museum, which initially brought Nelson to Atlanta where he was the first Seagram’s Artist-in-Residence in 1995–96. “I can’t think of a more appropriate way to celebrate both the institution and an artist who’ve meant so much to Atlanta,” says Pecou. “A fixture at openings and art events, Charles was an advocate and mentor to many, using his resources to build bridges and help create opportunities for others.”