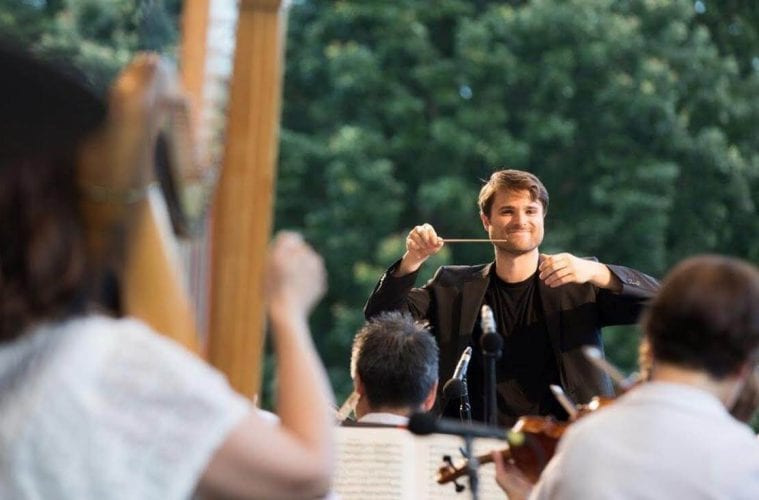 The ASO first performed at Piedmont Part in 1976, led by conductor Robert Shaw. There were years when the ASO would play as many as 10 summer concerts a year at the park; then after 2007 came a few years of absence. The orchestra returned to Piedmont in 2013, but performed in the park’s controlled-access Promenade area, near the Botanical Garden. For those concerts, free tickets were issued online but would be snapped up quickly, within hours, by those with computer or cell phone access, given the Promenade’s limited capacity of around 3,000. Finally, in 2016, the ASO returned to the spacious, open-access Oak Hill area in the park’s southwest quadrant to huge success. Thursday’s concert — presented by Bank of America — was exemplary of that, with an estimated crowd of around 10,000 people filling the green, gently sloping space facing the stage.

The weather was kind. Temperatures were not overly hot, and a threat of evening storms never materialized — an ideal setting for lying on blankets or sitting in low-backed lawn chairs, and enjoying music, community and fun. With the exception of a pair of patriotic bookends, the program drew entirely from the music’s two composers: Leonard Bernstein and Pyotr Tchaikovsky — not a typical summer community pops concert, but serious repertoire that was nonetheless fully engaging to the general public gathered to listen. It proved totally effective programming for the occasion.

Like many summer concerts, Thursday’s program opened with a hearty rendition of “The Star Spangled Banner” — all the more pertinent because it was also Flag Day, a national holiday that commemorates the adoption of the United States flag on June 14, 1777, by resolution of the Second Continental Congress. The ASO drew a massive crowd to usher in the summer.

Then came Bernstein’s ebullient “Overture to Candide” — the best-known part of the opera that the ASO performed through most of May in collaboration with the Alliance Theatre. Mulligan took the overture at a good tempo, one that was not overly fast, an all-too common occurrence.

It was followed by another overture-fantasy, Tchaikovsky’s dramatic “Romeo and Juliet,” inspired by Shakespeare’s eponymous play. The familiar work was well-played and served as a convenient programming companion to Bernstein’s “Symphonic Dances from West Side Story” to come later in the program, given that Bernstein’s musical is itself an Americanized retelling of the Romeo and Juliet story transposed to 1950s Manhattan.

Atlanta-native Khari Joyner then joined the ASO as cello soloist for another Tchaikovsky piece, “Variations on a Rococo Theme,” to close the first half of the show. Joyner’s excellent performance was fresh and lively, detailed in expression and articulation.

Joyner, who is completing his doctorate of musical arts at the Juilliard School in New York City, is an alumnus of two different ASO educational programs: a former principal cellist of the Atlanta Symphony Youth Orchestra and a 2009 graduate of the orchestra’s Talent Development Program, which is celebrating its silver 25th anniversary this year. Before Khari Joyner performed, Mulligan led the crowd in singing “Happy Birthday” in celebration of his 27th birthday.

Because Joyner’s 27th birthday is June 15, Mulligan and the ASO played “Happy Birthday,” encouraging the crowd to sing along. It is worth considering that when the talent development program began, Joyner was only two years old, so both that and the Youth Orchestra were part of the collective part of the consciousness of his generation of young Atlanta musicians.

Music by Bernstein likewise led off the second half of the show, with the “Symphonic Dances from West Side Story.” Even in an outdoor venues, the hot, visceral dances of the complex score, balanced by lyrical love songs, remains some of the composer’s most impressive music, presented in this cohesive concert package — far better than any light pops arrangements of “selections” from the musical.

As twilight waned to darkness, Mulligan and the ASO closed with Tchaikovsky’s 1812 “Overture,” which often closes summer parks concerts, though neither the popular use of fireworks or the less popular use of cannon, as traditional over-the-top addenda, were involved on this particular occasion.

Ah, but one cannot fully end a summer parks concert, especially one on Flag Day, without playing John Philip Sousa’s “The Stars and Stripe Forever” as an encore. Alas, the familiar march experienced a near train wreck — judging by the audible consequences, evidently some folks in the orchestra failed to observe a section’s repeat sign, and the overlapping of different tunes and harmonies created some sonic chaos and confusion within the orchestra until the musical ship was ultimately righted. Being a musical professional doesn’t mean you don’t make mistakes, even in a piece you may have played a hundred times; rather, it’s how well you recover from mistakes, as individuals and as a team. And recover they did by the final time through the “breakstrain” and “grandioso” (the final sections of an American military march form).

Despite that somewhat off-kilter nightcap, Mulligan and the ASO played a thoroughly enjoyable concert. This Piedmont experience in particular should serve as a message to arts leaders of the kind of broadly appealing event that can reach a larger slice of the public in one fell swoop with quality programming that also thoroughly engages.