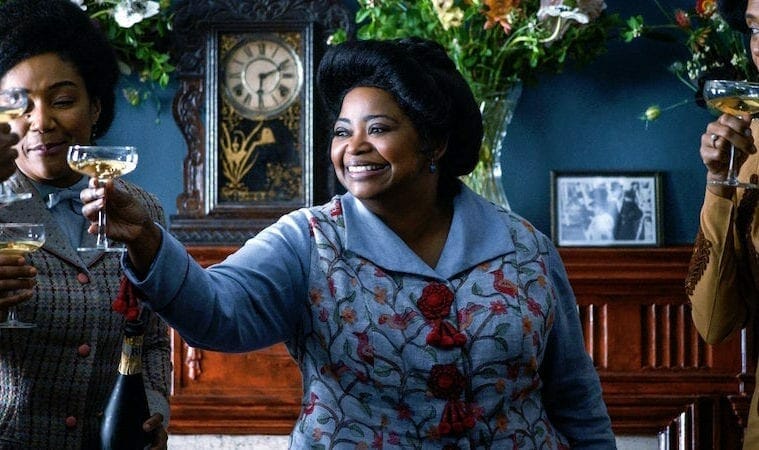 If, like many of us, you find yourself at home a lot now — as you should — Netflix and its ilk may be your best new friend all over again. (Don’t you wonder what the new-subscription numbers look like this week for all streaming platforms?)

Let’s start with Netflix. Four of its new series — the biographical Self Made: Inspired by the Life of Madam C.J. Walker (four episodes), the Los Angeles comedy Gentefied (10 episodes), the teen fantasy The Letter for the King (six episodes) and the gory horror melodrama Ares (eight episodes) — all hinge to some degree on questions of race.

Self Made is the newest, and immediately worth watching because it stars the always-engaging Octavia Spencer (The Help, Hidden Figures) as Sarah Breedlove. Born in Louisiana two years after the Civil War to formerly enslaved parents, Sarah died a half-century later, known as America’s first female self-made millionaire after founding, under her married name, a hair-care line for African American women.

We meet Sarah (Spencer) as a tired St. Louis washerwoman who’s indebted to a young entrepreneur named Addie Munroe (Carmen Ejogo). Addie’s scalp tonics restored Sarah’s self-worth by restoring hair that was falling out due to stress from an abusive marriage. Now with a fine head of locks and a new loving husband in C.J. (Blair Underwood), Sarah wants to work as a sales rep for Addie’s product. The light-skinned Addie looks at dark-skinned Sarah and nixes the thought: “Even in your Sunday best, you look like you just stepped off the plantation.”

The historic internal prejudice based on skin tones is one of the show’s long-running themes. I wish it were a little sharper. Likewise, the dramatic shape of Self Made, as Sarah and Addie’s business rivalry continues for years, and Sarah’s relationship with C.J. starts to suffer (he wants a wife who would rather cook dinner than build an empire), doesn’t throw any fresh curveballs. The series incorporates fantasy sequences and contemporary music to keep things lively, and Tiffany Haddish as Sarah’s carefree daughter Lelia may not be a good actor, but she’s a giddy, unpredictable presence. Still, in the end, Self Made feels a little too safe and risk-averse for the story of a woman who was anything but.

I’m late to Gentefied, which dropped last month, but I’m loving its witty, fast, bilingual look at life in East L.A.’s Boyle Heights.  The focus is on three Latinx adult cousins: Erik (Joseph Julian Soria), estranged from his ex, who’s about to have their baby; Chris (Carlos Santos), who’s relocated to L.A. from the Midwest, working as a line cook in a haute restaurant and dreaming of being a chef; and Ana (Karrie Margtin), a lesbian who helps Erik and Pop at the taco shop but wants to be an artist. All three pull together to bolster their grandfather’s failing taco stand, victim of neighborhood gentrification.

The actors’ rapport (even when fighting) and the speed of their riffs on assimilation and cultural appropriation keep the momentum going, even if the plot sometimes wobbles. I’m only a few episodes in and I’m looking forward to hanging out with this family for a while.

NETFLIX | The Letter for the King

A family of a different kind is formed among the teenage novices in the sword-and-sorcery fantasy The Letter for the King, whose quest to become knights gets sidetracked by the need to save their kingdom from an evil prince with magic powers. At first the series looks like Netflix’s bid for a Game of Thrones-level franchise. But you soon realize it has much lower goals (and budget). In fact, Letter is adapted from the 1962 novel by Dutch author Tonke Dragt, who wrote a bunch of kids’ books.

Recently seen as the juvenile male lead in HBO’s His Dark Materials, Amir Wilson stars as Tiuri, adopted son of a lord of the fictional kingdom of Dagonaut. The lord married Tiuri’s mother and brought her with her fatherless son home from the land of Eviellan. Like Tiuri and his mom, the people there are darker-skinned, seen as inferior pagans, and the subject of constant conquest attempts.

The land of Unawen’s Prince Viridian (a handsome, pouty, boring Gijs Blom) has conquered Eviellan, but secretly plans to rise up against his father the king. The conspiracy is to be triggered by five letters, sent in puzzle boxes, dispatched to Viridian’s fellow traitors. One of these letters lands in Tiuri’s hands, and he has to adventure over land and water to alert the king, aided by a squabbling bunch of fellow teens pursued by Viridian’s henchmen.

It sounds more thrilling than it is. Actually, Letter may be just the thing to occupy tweens stuck at home — at least for six hours. For adults, the plotting gets a bit repetitive: Tiuri escapes one close call with the letter, then the letter is captured by a bad guy, then Tiuri snatches it away. Repeat. Magic is also involved, with special effects ranging from decent to murky.

Rosa (Jade Olieberg) plays a biracial Amsterdam med student, who’s ambitious but doesn’t come from wealth or privilege. Her dad is a hospital porter, and her mom is bipolar. So despite her good grades, she’s a little surprised when she’s recruited by a student society known as Ares, populated exclusively by kids of the nation’s wealthiest, snottiest families. Getting hazed, then housed in the society’s luxe mansion/dormitory, Rosa finds her loyalty to her family tested by her desire to be as powerful as her new BFFs, while starting to wonder about the monster rumored to dwell in the Ares basement.

With most episodes only 30 minutes long, the show is both pretentious and swift, all of it elegantly shot in a Dutch-chic-gothic fashion. The big reveal is bloody nonsense, but since the script tries to tie the story’s supernatural excesses and characters’ wealth to an original sin embedded in the nation’s history, it’s at least woke nonsense.

As for stand-alone movies, Netflix is streaming the indie sci-fi whatizit Freaks, made with ingenuity on a tight budget. In a smart concept, we see everything through the POV of 7-year-old Chloe (the terrific Lexy Kolker). She lives alone with her single dad (Emile Hirsch), who won’t let her leave the confines of their grubby house. He tells her things like, “You need to lie to be normal,” and “Too much time goes by outside when I’m asleep.” All will be made clear, as we learn that, outside the house, the “normal” world is on guard against the emergence of “freaks,” humans with superpowers they sometimes can’t control. (Example: We see a news flash, commemorating the destruction of Dallas 10 years ago, a result of one of those losses of control.)

Chloe is one of the freaks, with a gift for mentally willing her way into the minds of other people. Dad also has powers. So might that nice-sinister old man who keeps showing up outside, driving an ice-cream truck (Bruce Dern, naturally). Mom was abducted by the normals some time ago and is locked away where mutants are kept, then killed. The question is, will Chloe be able to “pass” in the outside world, or will she have to use her powers against those who want to capture her?

What sounds like the makings of a lovely kids’ movie is tempered, unfortunately, by a few bursts of very bloody violence. So be forewarned if you’re trying to curate a viewing list for some youngsters on your living-room floor.

The original Netflix film Lost Girls comes with a lot of promise that it squanders pretty quickly. Amy Ryan, who made a splash as a wayward single mom and earned an Oscar nomination for 2007’s Gone Baby Gone here plays a based-on-real-life variant of that character. She’s Mari Gilbert, mother of three daughters, working two jobs and barely holding it together.

When the eldest, Shannan, who lives on her own, stops answering her phone, Mari tries to get answers from police. She learns that, writing the girl off as a hooker, they barely paid attention to a 4 a.m. call she made the night she went missing. Yes, Shannan was getting by as a sex worker. So were a dozen other women, whose bodies start being dredged up in the marshes of Long Island. The point is, they were human beings.

Hounding a detective (Gabriel Byrne), Mari not only tries to get the cops to track down the killer (spoiler: this remains an unsolved case) and to restore dignity to these lost girls. Unfortunately, the movie, directed a bit drably by acclaimed  documentary filmmaker Liz Garbus, is a bit of a drag. The male characters are ineffectual or actively evil. And Ryan delivers a one-note performance, though the script doesn’t give her much choice.

I was excited to see the latest BBC adaptation of an Agatha Christie book, The Pale Horse (two hourlong episodes). But a little like other adaptations by Sarah Phelps (including The ABC Murders), the movie is long on portentous mood, but the plot can be hardly recognizable as Christie’s. Still, it might hit your Anglophilic sweet spot.

Rufus Sewell plays Easterbrook, a man whose new wife (Georgina Campbell), dies in a shocking accident, and whose second wife a year later (Kaya Scodelario), begins to think he’s not over her. And — oh, yes — there may be a trio of spell-casting witches who have something to do with the first death, and the murders of a whole string of other people. Since Christie never really trafficked in the supernatural, you can guess witchcraft isn’t actually at the bottom of things. By the end, Phelps’ adaptation is convoluted to the point of confusion.

Also, from Amazon’s film library, I rewatched 1975’s fine paranoid thriller Three Days of the Condor. Robert Redford plays a CIA information-gatherer forced to go on the run when his colleagues are assassinated. Faye Dunaway is the young Manhattan woman he abducts, then persuades to help him unravel the mystery. It’s a fine, entertaining time capsule, but the reason to watch is to commemorate the death of Max von Sydow, who plays a suave hired assassin. 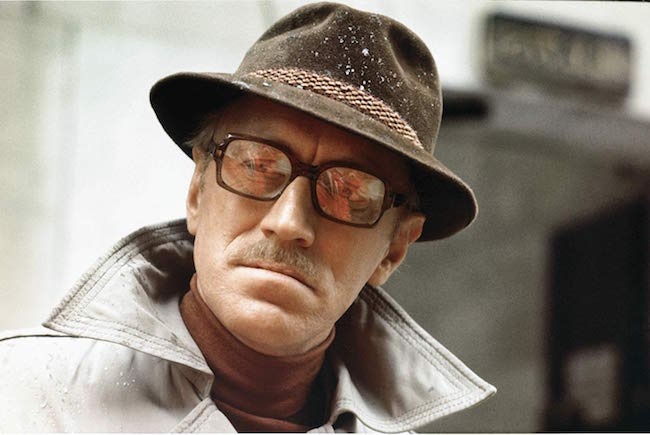 If you subscribe to the Criterion Channel streaming service, now is a good time to sample, or rewatch, some of the great collaborations von Sydow created with director Ingmar Bergman, most iconically The Seventh Seal.

If you’re an HBO subscriber, a trio of must-see series began airing this month, with new episodes weekly: Westworld, which exports its complex sci-fi plot out of the title theme park into the “real” world; My Brilliant Friend, adapted from the second novel of Elena Ferrante’s book series; and The Plot Against America, a miniseries based on Philip Roth’s scarily prescient 2004 novel, and produced by David Simon and Ed Burns, who made The Wire.

Still playing catch-up? Use our March column as a guide.