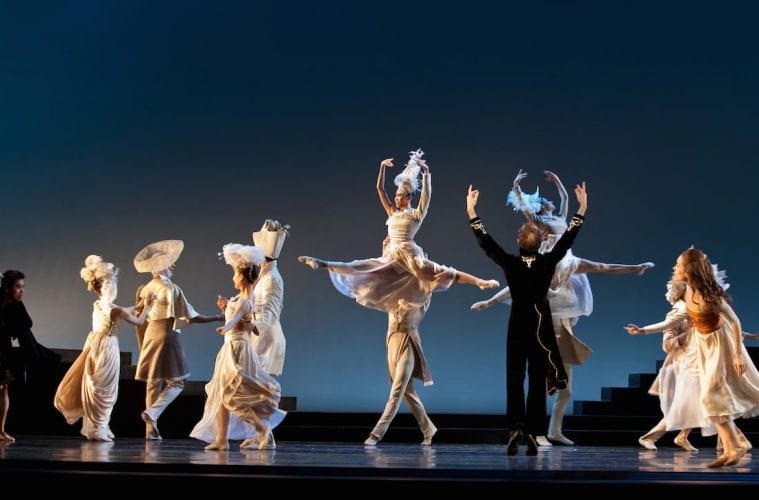 Twyla Tharp’s The Princess and the Goblin will be restaged next season. (Photos by Charlie McCullers)

It will be five years in August since Atlanta Ballet unveiled plans to create a more contemporary artistic profile. The following spring, the company announced the ambitious commission, Twyla Tharp’s The Princess and the Goblin. When the venerable choreographer came here to work intensively with the company, it seemed a significant step in a rapid transformation.

The ballet has since relied on a combination of classically based story ballets (Atlanta Ballet’s Nutcracker earned a record-breaking $2.2 million last December); works by internationally sought-after choreographers; and new, nontraditional works by emerging and midcareer dance makers that reflect the company’s character and the city’s culture, commissioned with a commitment to creative risk taking. From an artistic standpoint, the formula is working with surprising success.

It puts artistic director John McFall in a great position to celebrate his 20th anniversary with the company. Last week, he spoke before a select group of patrons and staff about how today’s dancers have extraordinary technique — but few have the passion, intelligence and will required to be an Atlanta Ballet dancer.

“During the last several years,” McFall said, “we have pushed the limits with dancers and audiences, reimagining what is possible, physically, mentally and emotionally as artists.”

Referencing the success of Helen Pickett’s Camino Real, McFall said, “I’m inspired by our village of arts collaboration and what we’ve been able to do together.”

He mentioned an old photo of Dorothy Alexander, founder of Atlanta Ballet, and pointed out a couple of ways in which the company remains true to her ideals, such as a closeness to nature in the chamber troupe Wabi Sabi, and the use of text in Helen Pickett’s Camino Real. Today’s Atlanta Ballet looks radically different from its early incarnations, but the upcoming season reflects Alexander’s vision at many levels.

Ballet was a rarity in most American cities and towns when Alexander founded her concert group in 1929. She had studied with teachers in New York, but was determined to build a company — and a supportive community — in her home city. She believed that if dance was going to take root in the United States — and be accepted on a level with opera, theater and orchestral music — it would have to grow at a grassroots level within communities across the country.

In 1956, Alexander organized the first Southeastern Regional Ballet Festival, which became the launching point of the American regional dance movement and the impetus to form the National Association for Regional Ballet. The trailblazing Dorothy Alexander in 1929, dancing in “A Strand of Black Elusive Seaweed.”

Regional ballet festivals helped drive up standards from within the organizations through artistic exchange, master classes and performances of works chosen by adjudication. Alexander set a precedent that submitted works could not be taken from standard classical repertoire. This encouraged companies to create original choreography, making a place for a distinctly American repertoire to grow. Such works often reflected their region’s culture and geography.

At a time when most Americans viewed ballet and modern dance as separate idioms, Alexander envisioned an American classical dance style, dance critic Doris Hering wrote, that would combine the “logic of ballet and the dynamism of contemporary dance into an indigenous language.” Alexander embraced both dance forms, with a philosophy bent on nurturing the individual’s creative, social, intellectual and spiritual development.

Twyla Tharp’s The Princess and the Goblin embodies Alexander’s values in so many ways, from the blending of ballet with modern dance to the ballet’s cast. Ranging from young children to mature company members, with a span of age-appropriate roles, the cast represents many levels of a ballet company community.

The Princess and the Goblin also reflects Alexander’s love of story ballets and the artistry — beyond technique — that storytelling requires.

Atlanta Ballet dancer John Welker explained some of the ways in which Tharp helped galvanize the company in 2011. “Twyla was able to communicate very clearly that we are not mere dancers but artists who, through our daily choices and state of mind, can have a profound impact on the quality of work we do, and the audiences we dance for.” Welker said that from the start of the creative process, dancers began to understand that Tharp was going to rely on them to help create the steps. “The key in creating these steps, the most important thing was you had to know ‘why’ you were doing those steps, ‘what’ it was you were trying to communicate, and you had to deliver those steps never doubting yourself and thoroughly believing every move you made.”

Scheduled for restaging next April, the production happened through a partnership between the Royal Winnipeg Ballet and Atlanta Ballet. As with regional dance festivals, this joint effort has fostered artistic exchange between the two companies.

Restaging Jorden Morris’ Moulin Rouge — The Ballet will likely reinforce ties with the Winnipeg company. And next February’s production of Moulin Rouge will enable Atlanta Ballet dancers to show how far they’ve come since the piece premiered here in 2010.

As for the regional angle, Home in 7 next March is an apt way to celebrate McFall’s 20th anniversary. It is one of the most synergistic collaborations McFall has orchestrated, capturing light and dark sides of Atlanta’s culture and history. With spoken word artist Marc Bamuthi Joseph performing on stage, choreographer Amy Seiwert’s sharply kinetic architectural forms merged with poetic imagery to Daniel Bernard Roumain’s blend of hip-hop, classical and electronica influences. The result was a sum far greater than its parts. Nurturing individual creativity was one of Alexander’s primary aims, and McFall has built a company of dancers who are constantly ready to participate as creative collaborators.

This environment has been a fit for Helen Pickett. On the heels of her successful first full-length ballet, Camino Real, Pickett has just agreed to serve as resident choreographer for an additional two years. The company culture will likely produce exciting results when choreographer Andrea Miller creates a new commission next season. The Juilliard graduate danced with the Batsheva Ensemble and now directs her own New York–based company, Gallim Dance.

Miller’s work is largely influenced by choreographer Ohad Naharin’s Gaga movement system, yet a show in 2013 at the Rialto Center for the Arts demonstrated that her voice is distinct. The Atlanta Ballet commission naturally builds on the company’s three years of performing Naharin’s work. One of Naharin’s pieces, Minus 16, will be restaged this month as part of the Modern Choreographic Voices program.

McFall has commissioned a new ballet from choreographer Douglas Lee, a Royal Ballet graduate who spent most of his performing career with the Stuttgart Ballet. Lee has made dances for companies as far-reaching as the New York City Ballet, the Norwegian National Ballet and Tulsa Ballet. His style is similar to Wayne McGregor’s in its use of rippling spines, extreme extensions and body-torqueing partnering — but there’s an added attention to sculptural shapes, with tension and resistance always a factor.

Alexander is famous for saying, “Success in terms of gate receipts” was not her company’s primary aim; its goal was to “educate the public.” Atlanta Ballet has updated this mission for today’s audiences, showing works by an impressive roster of choreographers: Alexei Ratmansky, Wayne McGregor, Jorma Elo and Christopher Wheeldon, among others.

Atlanta Ballet is nurturing Pickett, whose career is taking in a similar trajectory. McFall aims to develop a long-term relationship with Gustavo Ramirez Sansano, another international up-and-comer, starting with the lush and humorous El Beso in May 2016.

It’s true that Atlanta Ballet today is completely different from the concert group Alexander founded 86 years ago. But Atlanta is a different city. The common thread is a philosophy about art and life — the impulse to express one’s deepest loves, desires and heartbreaks through movement; the intelligence to put together a plan; and the will to see it through.