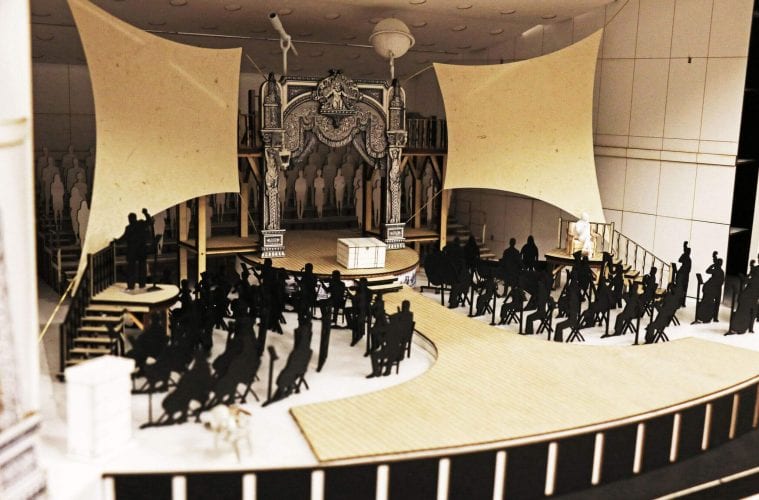 The protagonist of the story, Candide, is an optimist and a fatalist. After making his love for Cunegonde known to her father, the Baron, Candide is ejected from an idyllic life. As he embarks on a series of epic journeys to find his way back to the love of his life, the challenges he must overcome test his understanding of the world. Once innocence gives way to a knowledge borne of experience, the dawning of Candide’s new philosophy emerges when he rejects the notion that “everything is for the best in this best of all possible worlds,” and embraces the concept of personal agency to “cultivate our gardens” and create the worlds we desire.

The staging of Candide is every bit as monumental as the hero’s evolution. To overcome the square-footage challenge of portraying larger-than-life locations and adventures — including a castle, voyages at sea, shipwrecks, earthquakes, volcanoes and warfare — much of the action will be animated by a puppeteer, Matt Acheson, whose work was filmed within a toy theater, and projected onto massive screens bookending the proscenium. (Acheson will participate in a post-performance talkback after the May 13 performance.)

The Alliance’s Susan Booth, who directs the production, acknowledges that necessity was the mother of invention when visualizing how to assemble so many puzzle pieces — including 170 actors, musicians and singers who will be onstage simultaneously — to tell the story. But Booth says her solution also serves as a poetic nod to Voltaire, the French Enlightenment satirist who wrote Candide, ou l’Optimisme (Candide: or, The Optimist) in response to having had his own worldview hardened while trying to reconcile the horrors of the 1755 Lisbon earthquake that took 30,000 to 40,000 lives in a heartbeat, the Seven Years War and death of his beloved companion, the Marquise Du Châtelet. Voltaire is considered a philosophical pragmatist who used Candide to satirize the optimism (everything happens for the best) heralded by philosopher and mathematician Gottfried Wilhelm Leibniz.

“Voltaire believed there was a deity,” says Booth. “But he wasn’t sure the deity was always paying attention because there were some things happening that just didn’t seem orderly. In an essay, he made reference to a disinterested puppeteer.” The seeds for Candide were planted 17 years ago, when Booth, then the Alliance’s newly appointed artistic director, started wondering what she and Robert Spano, the ASO’s music director, could do together after “developing a massive art crush” on the maestro over a dinner of steak and vodka at Spano’s home. It took nearly two decades for the pair to figure out a cadence for scheduling an interdisciplinary collaboration — owing to the Alliance’s 18-month window for programming a season, versus the four to five years required for the symphony to establish its calendar.

As fate would have it, the concept for Candide came about when a dramatist approached her musical art crush with a novel idea 65 years ago.

In the fall of 1953, Lillian Hellman, the playwright who’d been blacklisted after her appearance before the House Committee on Un-American Activities during the McCarthy era, wrote to Leonard Bernstein, then-director of orchestral and conducting departments at Tanglewood, suggesting that Voltaire’s magnum opus could make “a really wonderful combination of opera, prose and songs.”

The intellectually hostile send-up of religion, theologians, governments, armies, philosophies and philosophers — concealed by a thin veil of naïveté — resulted in five Tony Award nominations for Candide in 1957. And Cunegonde’s coloratura aria “Glitter and Be Gay,” an opera aria that makes fun of opera arias, remains one of the most popular and profitable compositions for Bernstein’s estate. Since then, there have been many versions of the libretto, from 90 minutes to one production with a runtime that exceeded three hours. Booth promises her production will neither be compressed nor tortuously long. “It will be an evening with an orchestra, a chorus, a story and an audience with no fourth wall,” she says. “We’re going to talk directly to you. There will be moments when a narrator will say: Absolutely, inexplicably, we’re now in Paris! The tone of the evening is absolutely in the spirit of the original work and the eclectic spirit of the score. It is funny. It is witty. It is very self-aware. And it earns its moments of impossible heart.”

Evans Mirageas, the ASO’s vice president of artistic planning, says the Candide that premiered on Broadway bears little resemblance to what will be presented on the stage of Symphony Hall. “There are both opera house and concert hall versions: City Opera (devised by Hal Prince), Scottish Opera by Bernstein’s protégé conductor John Mauceri and concert versions by the New York Philharmonic and Baltimore Symphony, to name just a handful,” Mirageas says. “Everyone has tried their hand on this piece because, in some ways, it is a gem that is beautifully flawed.”

Spano is inspired by what he calls the “beautiful ambiguity” of a production that borrows from several performance genres to create a singular event that will feel like a pop concert, live theatre, Broadway musical and an evening at the symphony at varying turns.

“Bernstein was a musical polymath,” says Spano. “Candide offers a mix of chorales, operatic arias and patter songs. It’s the perfect work for the kind of treatment it’s getting in the way we’re able to do it. As I think about what we’ve done historically with theater of a concert . . . we’ve run the gamut. But I can’t think of another work that so begs what is outside of theatrical or concert expectation than this one.”

The timing of Candide’s debut in Atlanta is prescient: marking the Alliance’s return to the Woodruff Arts Center campus since taking their show “on the road” for the 2017–18 season; falling squarely in the middle of the ASO’s LB to LB tribute, a two-year celebration of Beethoven and Bernstein; and coming on the 100th anniversary of the birth of Bernstein. More importantly, according to Booth, Voltaire’s message is timeless.

“It’s a good time to do Candide right now,” she says. “Make Your Garden Grow is a direct musicalization of Voltaire’s sentiment, written in 1759, which said that sometimes it is not ours to understand, the world does not make sense, but we can take care of our fellow man and we can get to work.”