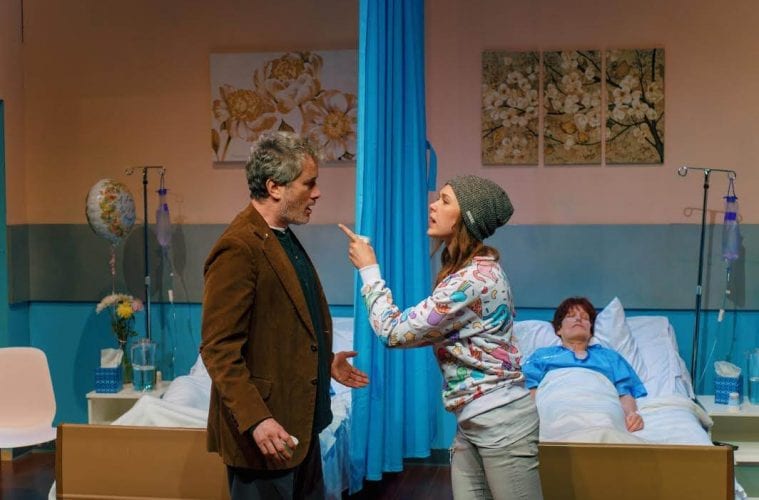 The title of the play A Funny Thing Happened on the way to the Gynecologic Oncology Unit at Memorial Sloan Kettering Cancer Center of New York City is a pretty good indication of what to expect from Halley Feiffer’s comedy about a middle-aged divorcee and a young comedienne who bond after their mothers are diagnosed with ovarian cancer. It’s the latest offering from one of the city’s newest companies, Atlanta Theatre Club, which stages female-driven work. The show opened on May 4 with Jennifer Silver at the helm, and plays weekends at Pinch ‘n’ Ouch Theatre through May 20.

Each performance opens with a different comedienne doing a set. A snarky and spunky Katie Bruise opened the May 6 performance fresh off of a successful showing at the Laughing Skull Best of Atlanta Comedy Showcase. Bruise definitely set the audience up for the awkwardness (in a good way) that was about to ensue in this 90-minute romp.

At the beginning of the play, aspiring comic Karla (Rebeca Robles) is practicing her set at the hospital for her mother, Marcie (Ellen McQueen), who is doped up on cancer medication. Waist-deep-in-a-divorce, middle-aged Don (Douglas Dickerman) walks into the room to visit his unconscious mother Geena (Virginia Kirby), when he hears Karla’s jokes about fantasizing about her vibrator. When he confronts her, an absurd argument erupts with a blue plastic curtain between them. After that initial spat, over the course of several hospital visits Don and Karla open up to each other (in more ways than one) about their shared fears of cancer, love and their unfinished business with their mothers.

Robles and Dickerman carry the show for most of the play with their flirtatious banter and inappropriate jokes. Robles is charming and crass as Karla, who “gets paid $15 and a basket of nachos” to ruminate about her sex life six days a week. Dickerman as Don is the poster child for giving up in his t-shirt, sweats and torn New Balance sneakers. He has moments where he’s over acting, but for the most part he does a nice job straddling the worlds of Karla, for whom he lusts, and Marcie, to whom he relates. Kudos also must go to Kirby and McQueen, who are onstage asleep for most of the play, but their presence is still very much felt, and their comedic timing is spot-on.

It’s worth noting that Robles is on quadruple duty as the show’s producer, star, props and costume designer, all of which she has executed well in this production. Silver does a nice job keeping the quick pace of the jokes, but also allowing the audience time to digest. The production is light-hearted for most of the first half and then gets gloomier — perhaps a tad too much — as it grows more sincere. But that does not take away from the sentiment of the play. Silver also gets creative with the scene transitions, with the stage crew member dressed as a nurse with a clipboard checking on patients.

The set of this intimate play, designed by Jonathan Fries, is a hospital room with two identical beds, IV drips, side tables with water pitchers and two pink-ish chairs. The set design is simple but spot-on in its rendering of the unnatural, stale pastel color schemes that mar hospitals.

A Funny Thing is a dark comedy that is as outrageous as it is sincere in its approach to exploring sex, cancer and loss. Even with the quippy dialogue, Feiffer still manages to slide in subversive messages about gender roles, grief and what we owe to our parents. With references to a Sondheim musical, Grey’s Anatomy, cancer and Law & Order SVU sprinkled throughout, A Funny Thing is an enjoyable night at the theater full of laughs and a few tears.