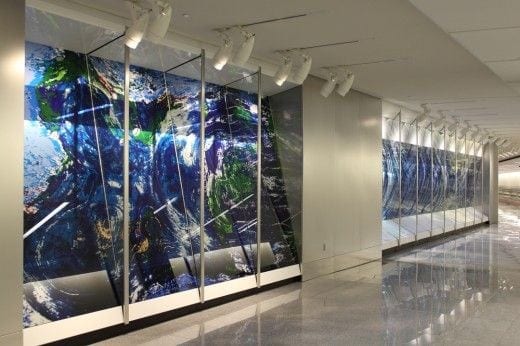 The airport as gallery: Atlanta greets visitors with art 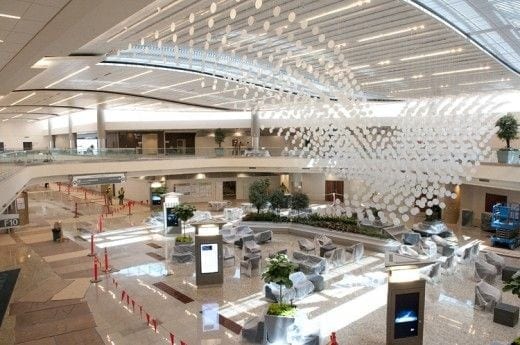 Uebersee's "airFIELD" as viewed from the mezzanine.

A city’s airport is more than a transportation facility. As the site of many visitors’ first and last impressions, it is an important municipal marketing opportunity, and art can play a key role in setting the tone.

On the most basic level, art enhances the environment and offers distractions from the tedium of travel. Next, airport authorities may use it to “sell” the city, with images of its landmarks and natural beauty. Some go further, acquiring sophisticated works that brand their cities as forward-looking, culture-savvy places. 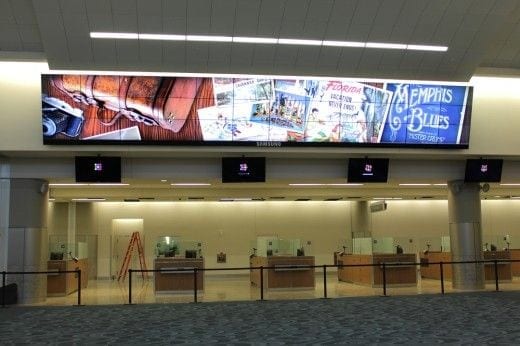 "American Tapesty," a multiscreen video by Broadcast Solutions, welcomes arriving visitors with images of Atlanta and the region.

Atlanta’s airport art program operates on all these levels. Begun in 1980 with the opening of William B. Hartsfield Atlanta International Airport and an ordinance that sets aside 1 percent of some aspects of the airport’s construction budget for art, the program has distributed a diverse array of artworks from local, national and international sources throughout the facility.

David Vogt, an 18-year veteran managing the Department of Aviation’s airport art program, and Katherine Dirga, who joined the staff in 2007 upon the retirement of Lamar Renfrew, deserve kudos for their many-pronged effort. They have navigated the shoals of propriety (as you might imagine, an airport is not a venue for political, sexual or any other kind of provocation) and the airport’s safety and maintenance concerns without sacrificing quality. Both the permanent collection and the temporary exhibitions mounted by local institutions showcase the city’s cultural life in a serious way.

The artwork in the Maynard H. Jackson International Terminal, which opened May 16, features a similar mixture of commissions and collaborations with local institutions, though with mixed success. The site-specific commissions completed thus far are sophisticated — reflecting trends in public art, such as interactivity and technological complexity — and diverse. But they don’t always serve or survive the spaces they occupy. The collaborations seem more promising.

Amy Landesberg’s vibrant “Veneers,” a wall of glass panels in the corridor connecting Terminals E and F, is the most successful commission. The Atlantan brought together her skills as an architect and an artist in this functional work, which serves as the barrier between the public space and the “sterile” hall for those who haven’t gone through Customs. 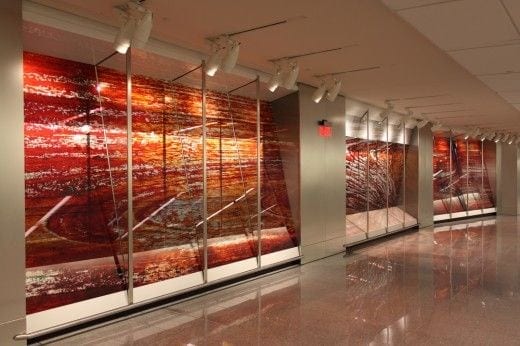 The wall, which enlivens a 605-foot-long windowless space, features patterned abstract imagery in a procession of vibrant colors, blue to orange. The imagery is allusive. It conjures up galaxies, whitewater eddies or — and this is its source — wood grain. As explained in texts at both ends of the hall, Landesberg has blown up photographs of wood samples from 29 extinct tree species. The colors are pumped-up versions of those actually found in the wood. (Think about the color in the Moulthrop family’s turned-wood bowls.)

In a sense, “Veneers,” is an elegy about an eco-tragedy. If there’s a certain irony to incarnating the grain of extinct wood at an unnatural scale on a glass (impregnable glass, at that) wall, it’s also a form of preservation. 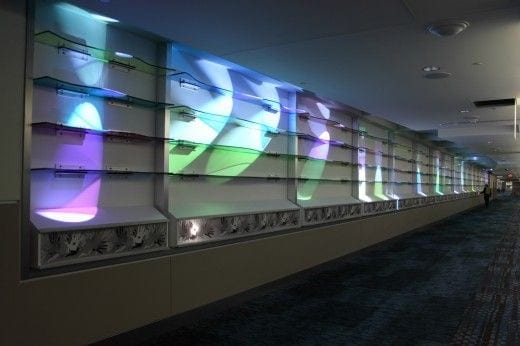 A visitor can trigger additional sound by touching the hand-shaped panels on the lower portion of the wall. Interactivity is buzzy, but it doesn’t seem to be a good fit here: will travel-weary visitors lugging sweaters and carry-on bags, who have been trained not to touch artwork, bother to engage — or even notice?

The jury is still out on “airFIELD” by Uebersee, an international team of transmedia artists, because the installation wasn’t working properly during my several visits. In a set-up similar to the group’s “e-Cloud” at Norman Y. Mineta International Airport in San Jose, California, the piece is composed of 1,400 discs, which hang from the ceiling in a dense formation of two intersecting swooshing shapes. 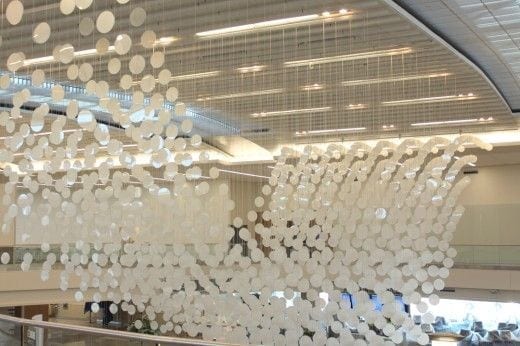 A detail from Uebersee's "airFIELD" (Photo by Mike Jensen)

Normally opaque, the discs turn transparent when electrified. Uebersee has designed computer software that reads the Atlanta airport’s flight schedules, and when a plane takes off or lands, the flight path is indicated by lines of transparent discs.

It’s seductively high-concept, but from what I was able to discern, the visual effects are fairly subtle and easily missed, especially because it’s above people’s heads. More problematic is that there is no way to divine its meaning unless one reads the explanatory panels on the mezzanine.

Donald Lipski is probably the biggest name among the artists on view, but his “RebiLace,” a large chandelier festooned with Swarovski crystals, is the most disappointing work. The scale of the space swallows it up. The crystals don’t throw off much color, and it appears to be unintentionally asymmetrical. I’ve seen more effective light fixtures from off the shelf. 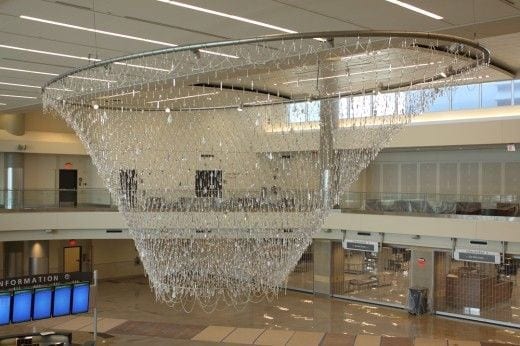 Lipski has a thriving practice in public art and has done a lot of good work, including some knockout suspended light sculptures made out of branches for Sacramento International Airport and Grand Central Station. I will chalk this up to “the Atlanta Curse”: our history of getting minor work by major artists and architects.

Chris Moulder also has contributed a suspended sculpture. For “Mammatus,” the Atlanta artist used eight miles of metal beading looped in a series of intersecting concatanary curves (also the basis for the structure of Antonio Gaudi’s Church of La Sagrada Familia in Barcelona). A computer-operated LED light system bathes the voluptuous forms — “mammatus” refers to a type of cloud, so called because of its resemblance to mammaries — in a changing wash of colors. 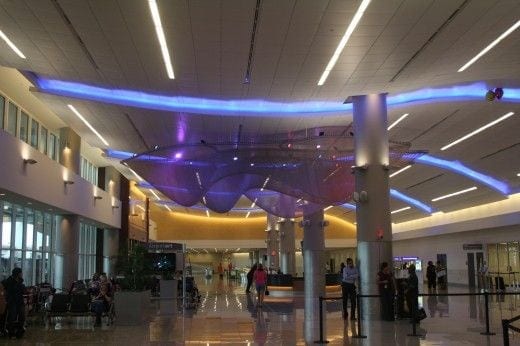 Having seen it in Moulder’s studio, where the space is smaller, the ceiling is lower and the colors were more vibrant, I can attest that the piece is dramatic in the right context, as you can see in Felipe Barral’s video. The precision required to make the curves and the intersections is impressive, too. But, unfortunately, the scale of the Arrival Hall diminishes its visual presence unless one is standing close to it, and the ribbons of blue light in the ceiling don’t help. “Mammatus” makes a stronger impression at night. 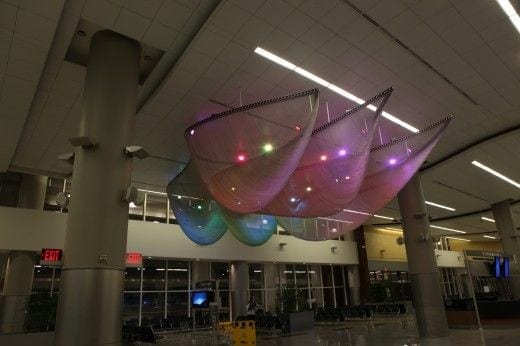 Another view of "Mammatus."

Ironically, “Picturing Georgia,” a low-tech, temporary exhibition organized by Atlanta Celebrates Photography, is among the best of the art in the new terminal. Curated by Corinne Adams and ACP Executive Director Amy Miller, it’s a stunning array of large back-lit photos showcasing Georgia’s natural beauty and 21 of its photographers.* 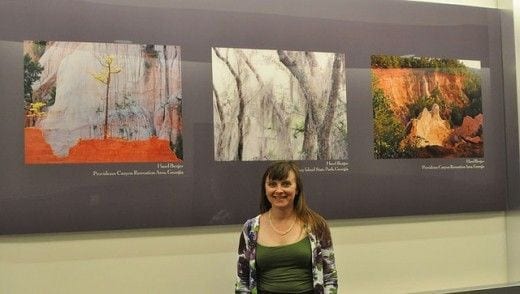 Hazel Berger with her photographs in "Picturing Georgia." (Photo by Reis Birdwhistell)

Visitors might also enjoy the rotating series of videos and animations shown in kiosks in the ticketing and departure areas, curated by the Atlanta Film Festival. The kiosks will also feature a video about the artists and artworks in the terminal. 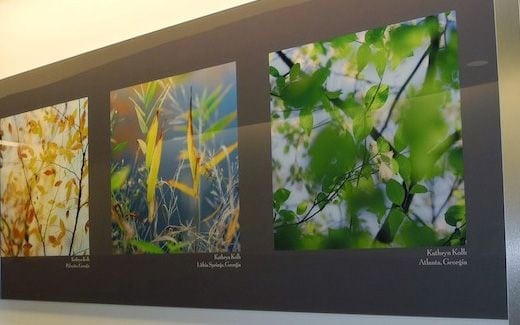 Despite certain disappointments in the new terminal, the airport art program remains a strong and lively work-in-progress. The team has recently completed a multimedia history of Atlanta, created in conjunction with artist Gary Moss and historians at the Atlanta History Center, in the underground concourse connecting Terminals B and C. Atlanta City Council recently approved Steve Waldeck’s “Flight Paths,” a simulated forest replete with sunbeams, birds, fireflies and a rainstorm, for the underground concourse between A and B. 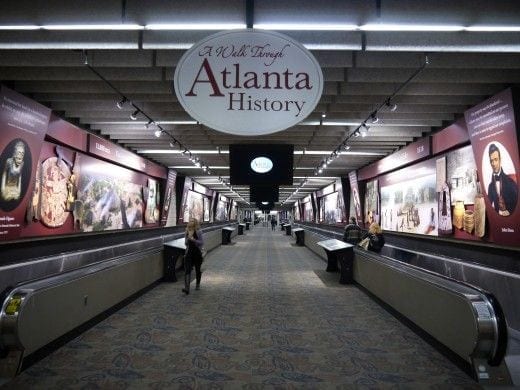 "A Walk Through Atlanta History," in the concourse between Terminals A and B.

Vogt says his team is working on a series of applications that will offer tours of the art collection based on how much time a traveler has. It’s too bad the airport is essentially off-limits to non-traveling Atlantans. Checking out the art program’s website is an alternative of limited scope. Vogt and Dirga will lead small-group tours on occasion, when their schedules permit it.