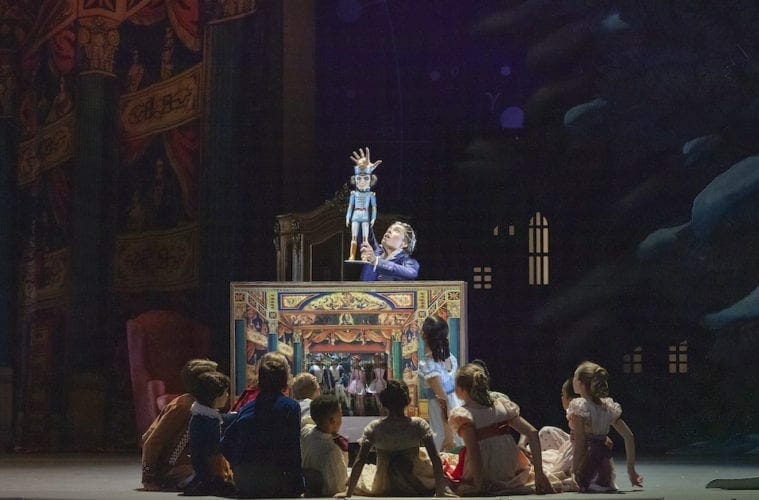 Covid-19 is the Grinch that's stealing Atlanta Ballet's "The Nutcracker" this year. (Photo by Kim Kenney)

Atlanta Ballet officials were devastated last week when they decided that they had no choice but to cancel the 2020 edition of The Nutcracker.

In a Zoom interview with ArtsATL, president and CEO Arturo Jacobus and artistic director Gennadi Nedvigin walked through the steps that led to the decision and what it means for the financial well-being of Atlanta Ballet.

The pressure to stage The Nutcracker came from two fronts: artistic and financial. The production is a holiday tradition for families, and Atlanta Ballet has staged the show every December for 61 years (except in 1968, when it did Sleeping Beauty). On top of that, the ballet debuted choreographer Yuri Possokhov’s modern high-tech version two years ago and was about to produce it for the first time at Cobb Energy Performing Arts Centre.

The Nutcracker accounts for 20 percent to 25 percent of earned revenues for just about every major American ballet company. In other words, Nutcracker profits fund the rest of the year’s programs. Arturo Jacobus says Atlanta Ballet must make up a $3 million shortfall from performances canceled by Covid-19. (Photo by Charlie McCullers)

“Everything else loses money,” Jacobus said. “We’re about education and community involvement, but at the very core is the art itself. The art is manifested in the repertory programs we do the rest of the year and every single one of them loses money.”

The ballet expected to sell 52,000 tickets to the 30-show run of The Nutcracker, with a profit of about $1.6 million.

All summer, ballet leaders held on to the slight hope that the production might go forward: A vaccine might emerge by December or the spread of the virus might abate. Instead, Georgia’s stubborn determination to go against the advice of public–health experts has made the state one of the Top 5 Covid-19 hot spots in the country. Even performances with social distancing became problematic because large public gatherings have turned into super-spreader events nationwide.

“Social distancing is a reality, and audiences are not going to feel safe,” Jacobus said. “Then you think, ‘How safe is the orchestra going to feel in a pit with 40 musicians elbow to elbow? Not to mention the dancers.’ The Nutcracker is a big ballet, and it has a lot of big scenes. The dancers need to embrace and lift and hold each other. It’s just not feasible.”

Even if Atlanta Ballet did a socially distanced production, Jacobus said every audience survey he’s seen indicates audiences won’t feel comfortable attending performances until a vaccine is found. And even if every seat was sold for social-distanced performances, the ballet was looking at a 50 percent loss in ticket sales. That could have meant a net loss of $5 million for 2020, Jacobus said.

There was also the disaster scenario of spending $2 million to put the production in place and having to pull the plug at the last minute. “The shelter-in-place order in March came unexpectedly to everybody,” Nedvigin said. “It happened the week before we were moving in to do Giselle, and we had to cancel. It could get tense the week before we were to open Nutcracker and we might have to cancel at the last minute. Imagine where that would put us [financially]. It would just stop us forever.” December was supposed to mark the debut of “The Nutcracker” at Cobb Energy Performing Arts Centre. That debut is now planned for 2021. (Photo by Kim Kenney)

Companies around the country are canceling their 2020 Nutcracker productions: New York City Ballet, Joffrey Ballet and San Francisco Ballet are among the most prominent.

Nedvigin said he’s in constant communication with other artistic directors — exchanging information and ideas as they deal with the crisis — and he has yet to hear from anyone who’s committed to a full production this December. Most have either conceded, or are about to concede, to pandemic realities and are looking to spring.

“Virtually everyone I know is guardedly optimistic about doing a spring season,” Jacobus said. “We’re actively selling tickets to a spring season and most every company is doing the same thing.” But with that comes significant financial challenges.

Atlanta Ballet faces a $3 million shortfall this year because of the two canceled spring shows, and now The Nutcracker. “We’re going to try to make up the gap with philanthropic donations to keep the company whole,” Jacobus said. “That’s my No. 1 priority: to keep the company whole and intact, and to come back in spring and be ready financially for 2021-22. If we can perform The Nutcracker in the fall of 2021, and we can do a full season, we’ll have a smaller budget but we can make it.”

Already, Atlanta Ballet employees who make more than $50,000 annually have seen salary reductions, and other financial decisions have been made to reduce overhead. But ballet leaders are committed to keeping the 39-dancer company on salary without any changes, along with its orchestra.

“From Broadway to dance to orchestras, everybody is dealing with the same thing,” Jacobus said. “It’s going to have a huge impact on the entertainment and arts industry. The damage that will have occurred to these organizations is not easy to repair once it’s OK to come back.”

He said the fear is widespread that many institutions won’t survive. “I don’t know of anyone of substance that has gone under yet, but there is fear out there,” Jacobus said. “We’ve taken an ‘all or nothing’ attitude. We decided we’re not going to do layoffs or furloughs or gradually reduce the size of the organization to save a few dollars. We concluded that’s not going to make or break the organization. We have a commitment to our employees and artists to find a way to keep them employed. But the caveat is always, ‘As long as we’re able.’ If we’re not able, it’s going to be the whole organization and not just a few.” Rehearsal spaces will be much different when dancers, who will wear masks, return in September.

Atlanta Ballet company dancers will return to the studio September 2 to prepare for the modified spring season of three shows, beginning with a February performance. They will have been off the dance floor for six months and, Nedvigin said, it will almost be like they retired and then decided to come back. The first few days will be spent getting them into dance shape.

“We’ll be very careful with our procedures,” he said. “They’ll be in masks. We’ll bring dancers into pods and spread them in different studios. We’ll use staggered times so they aren’t all in the building at once. We’re taking it very seriously. We want everyone to feel safe and be safe.”

The spring highlight will be a world premiere by the ballet’s new choreographer-in-residence, Claudia Schreier. Initial rehearsals will be done virtually.

The ballet also plans to present a Nutcracker substitute for the holidays, although what that will be is not yet finalized. Jacobus and Nedvigin said an announcement is forthcoming and promised a unique presentation.

But the specter of canceling this year’s Nutcracker will likely be the defining moment of the  2020–21 season. “This is a huge loss for the community,” Jacobus said. “We fill the auditorium with schoolkids for at least two performances a year, and it’s a holiday tradition for Atlantans and Georgians.”

In addition to the 39 company dancers, the cast and crew of The Nutcracker includes 19 dancers from Atlanta Ballet 2, 168 students from the Atlanta Ballet Centre for Dance Education, more than 40 orchestra musicians and 35 crew members.

“What a loss for the dancers,” Jacobus said. “I don’t think they enjoy the fact this is the first December they haven’t been fully consumed with back-to-back performances. And all the kids who perform with us. It’s sad. We wish it weren’t the way it is.”