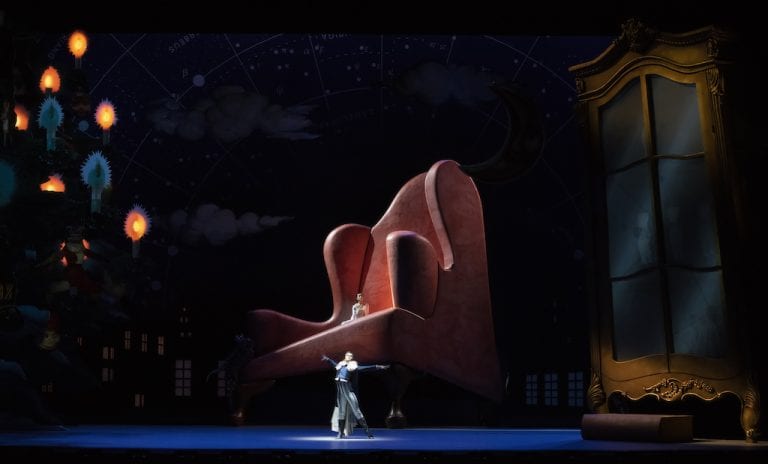 Special effects loom large with Atlanta Ballet’s new production of The Nutcracker. Images span from elaborate clockwork machinations to books that swirl through the air to household objects that change in scale, creating seismic shifts in perceived reality.

The $3.7 million production — nearly $6 million including costs for maintenance and upkeep — integrates high-tech video projections with Yuri Possokhov’s choreography, and the clear intent is to attract large audiences. But for all the layering of video with scenery, lighting and dancing, The Nutcracker’s success is in the simplicity of Possokhov’s story. The production, which runs through December 24 at the Fox Theatre, is destined to become a staple among Atlanta holiday arts events.

Possokhov’s version, which looks back to E.T.A. Hoffman’s original 1816 tale, The Nutcracker and the Mouse King, has neither the conventional Sugar Plum Fairy and Cavalier nor its Snow Queen with her partner. Instead, Possokhov expands the roles of young protagonist Marie and the Nutcracker Prince by giving them both of the ballet’s major pas de deux. This creates time and space for their relationship to develop, which puts the ballet’s story in a different light.

At one moment Saturday evening, Airi Igarashi and Sergio Masero-Olarte, as Marie and the Prince respectively, danced the Grand Pas de Deux. Masero-Olarte swept her above his shoulders, and as he revolved, she seemed to etch spirals across the upper space. She descended, and then as Tchaikovsky’s music quickly gathered volume and haste, each turned away and ran a few steps but stopped short. In silence, save a rippling harp, each looked up in wonder, as if realizing they’d fallen in love.

The moment seemed to encapsulate author E.T.A Hoffman’s belief that in order for people (especially children) to live fully, they must eschew the constraints of rational thought and ignite the imagination. Then, through a strange and labyrinthine journey of the mind, they discover the world anew.

The production design team had already run with this idea. Their conceptions reached back to Hoffman’s era but also gave the production a storybook look, a whimsical touch with fresh and luminous detail.

Set designer Tom Pye and video projection designer Finn Ross drew inspiration from 20th-century American artist Joseph Cornell, whose vitrines and glass-front boxes assemble disparate ephemera, such as images of butterflies, ballerinas and old printed material, with other found objects. Their placement can curiously evoke the nostalgic or surreal in the viewer’s mind. A clock spring, for instance, could symbolize the passage of time.

Indeed, the production proceeded like clockwork, from the digitally generated snowfall on a pre-curtain scrim to skaters who cut perfect curlicues on an icy pond surface during the overture’s charming animated video sequence.

The Atlanta Ballet Orchestra, conducted by Garrett Keast, an America-born conductor based in Berlin, played with a sound as crisply defined as a sleigh’s tracks gliding through the snow.

On stage, the real and fantastical mingled with everyday things — an armchair and a glass-front cabinet, or a puppet theater and its marionettes that suddenly grew tenfold then collapsed into nothing just as quickly.

In this storybook world, Marie’s living room turned surreal, throwing her environment off-kilter. The mysterious uncle or godfather Drosselmeier — whom Nikolas Gaifullin portrayed with a youngish, gentlemanly grace — took a central role. He orchestrated the transformation of everything around Marie, including a wooden-headed Nutcracker that turned into a handsome prince.

In both of the pas de deux with Marie and the Prince, Possokhov’s choreography looped and dove around the space like a roving, dream-like imagination, liberated from the constraints of rational thought and physicalized. Within the nucleus of their duets, their movement stirred and whirled, then soared, dipped and opened outward toward the audience. Igarashi projected warmth and vivacity.

Act II’s divertissements offered a few soloist roles — notably Fuki Takahashi’s deft fan work in the Chinese dance. In the quaintly comical “French Dance,” Jackie Nash, in a blue-feathered tutu, watched a clutch of adorable chicks. Her role as mother hen seemed outdated — more of the 18th century than the 21st, but Nash and her partner Jacob Bush carried off their parts with as much humor and dignity as they could muster.

During “Waltz of the Flowers,” a visual high point, three couples — each a male rose and female dragonfly — appeared in fanciful shades of peach, mauve, lavender and teal. As if they’d floated off the pages of a giant book, flowers appeared against a shimmering green Aurora Borealis. Dancers with skin tones ranging from pale to dark appeared in the ensemble of Flowers, and Sandra Woodall’s costume choice — romantic tutus with bare legs — showed each dancer’s individual beauty.

Finally, in the “Grand Pas de Deux,” Igarashi spun and burst into broad, luminous lines. She cut spirals through space, seemingly levitated onto Masero-Olarte’s shoulders into the upper air, with total trust. The two were ecstatic, bold and invincible. Their paths through space recalled Hoffman’s convoluted journey of the imagination, suggesting that if we can watch dancers traverse such journeys on stage, we can see the world anew.

There are risks in placing so much responsibility on the shoulders of two principal dancers, without the help of a Snow Queen or Sugar Plum Fairy. The required stamina must be great. Yet, the expanded roles allowed for something rare and beautiful to happen on stage and revealed a fresh young talent in Igarashi, whose fire and crisp lyricism recalled ballerina Carla Fracci.

One might consider the blend of visual effects to be overwhelming to the senses and over-the-top at times, but the goal of this extravagant work is to entertain and appeal to large audiences. Toward this end, the production runs like a well-oiled machine. But last Saturday, Igarashi and Masero-Olarte were The Nutcracker’s beating heart.